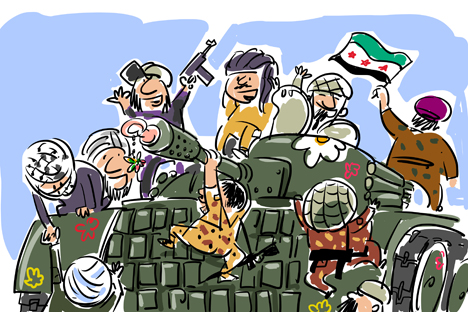 Rebel leaders will sit down to negotiate if Western military aid is no longer a possibility.

On a chilly October day in 2002, I stood in front of Tony Blair, then the British Prime Minister, and Russian President Vladimir Putin at Putin’s country residence of Zavidovo outside Moscow.

Blair had come to Zavidovo to share – and promote – his dossier on Iraqi weapons of mass destruction (W.M.D.), trying to win Russia’s support for tougher action against Saddam Hussein.

Facing the international press pack at Zavidovo, Blair looked excited and spoke very eloquently about the threat that Iraq’s W.M.D., especially the chemical weapons, presented to the world.

He appeared to passionately believe that the threat was real. Not so Putin, who listened with a skeptical air about him. With a wry smile, he politely dismissed the dossier as unconvincing.

Ten years later, in an apparent déjà vu, although this time at the British Prime Minister’s residence at No. 10 Downing Street, the Russian and British leaders once again told the press that they disagreed on inconclusive intelligence about the use of chemical weapons – this time in Syria.

The backdrop to the Sunday meeting between Cameron and Putin is the announcement by U.S. officials that the United States is now convinced that the Assad regime has used chemical weapons in the Syrian conflict.

Whether the evidence of this is as rock solid as Tony Blair’s claim of 10 years ago remains to be seen, but the red line drawn by President Barack Obama has apparently been crossed and the U.S. is ready to provide weapons to the Syrian opposition.

The unconvinced would, of course, argue that the red line for Washington wasn’t the use of chemical weapons, but the recent successes of the Assad regime and its Hezbollah allies on the battlefield.

To the U.S. this must look as a victory for Iran, the sponsor of Hezbollah and Assad and a sworn enemy of the West.

The decision to prop up the rebels with military hardware is meant to help them reclaim lost ground in Syria, therefore prolonging the bloodshed and suffering of the very people whom the West wishes to protect.

Much has been said about the danger of Western weapons getting into the wrong hands. President Putin reminded his British host of a ghastly video on the Internet implicating rebel fighters in cannibalism.

Speaking earlier on Sky News, Cameron accepted there are elements among the motley Syrian opposition that are unsavoury and said he’d like them to be driven out of Syria.

He didn’t say, though, who is capable of driving those unsavoury elements out. As things stand now, it is the Assad regime and its Hezbollah allies.

Perhaps Cameron expects the moderate elements in the opposition to get rid of the al Qaeda affiliates when, and if, Assad is defeated.

But judging by Afghanistan, Iraq and, to a lesser degree Libya, once a common enemy that held disparate opposition groups together is gone, sectarian violence flares up and wastes even more civilian lives.

In other words, there can be no military solution to the Syrian conflict.  Cameron appeared to acknowledge this when he told the press at No. 10 that both he and Putin want to see a peace conference and a transition of power in Syria.

Putin arrives in London for Syria talks with Cameron

Speaking earlier on BBC Radio 5 live, Cameron said: “We won't get a successful peace conference unless everybody does everything it can to help bring it about."

Russia has done its part by securing Bashar al Assad’s agreement to take part in a peace conference. However, Western leaders are struggling to persuade the opposition to attend.

But why should they feel like attending if there is a promise, however distant, of a military victory with the help of Western supplied weapons?

There is only one effective and potent way of bringing the opposition to the negotiating table – by telling them that they would not get any military help from the West.

Nikolai Gorshkov is a freelance writer based in London. He served as a BBC correspondent in Eastern Europe from 1979-2012, including a term as the head of the BBC office in Ukraine.