G8 meets in Northern Irish town with a history of conflict 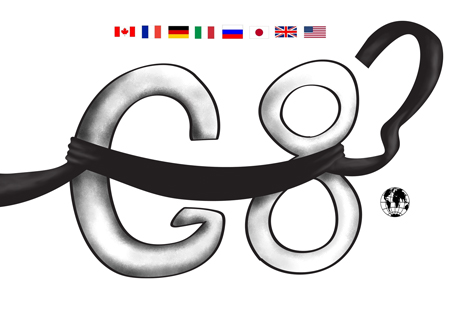 As the G8 leaders gather on the outskirts of Enniskillen, they would do well to remember the town’s history with sectarian conflict.

The G8 summit at Lough Erne in Northern Ireland has failed so far to make any progress towards a solution to the conflict in Syria.

An eagerly awaited meeting between U.S. President Barack Obama and Russian President Vladimir Putin ended with the acknowledgement that they have different perspectives on the crisis.

There are indeed several different opinions as to what is actually going on in Syria. Is it a civil war, a war by proxy or a sectarian conflict along religious lines?

Photo of the day: G8 summit in Northern Ireland

This final option is gaining traction with increasing numbers of observers around the world, and it adds an element of irony to the failure of the attendees at this year’s G8 to make any meaningful progress on resolving the Syrian conflict.

The Lough Erne Resort, where the summit was taking place, is on the outskirts of the town of Enniskillen, which had its share of trials during the period of the Troubles. The most serious of these was an IRA bombing on Remembrance Sunday in 1987 that killed 11 people and injured 63.

After the bombing, the people of Enniskillen set up a group called Enniskillen Together to work for reconciliation. Seven years later, the IRA announced “a complete cessation of military activities,” reciprocated by a Loyalist ceasefire.

The Enniskillen tragedy might not have been a pivotal turning point in Ireland’s religious conflict in itself, but in the words of Gerry Adams, the leader of the IRA-affiliated Sinn Féin party, it undermined the “legitimate” use of military force.

Eventually, all parties to the conflict – the Republicans, the Unionists and the British government – began to realize that no side could either win or be entirely defeated militarily.

This realization eventually led to the Good Friday Agreement, and a peace process, which – despite all its setbacks – has made Northern Ireland a much more tranquil place. Not that long ago, it would have been unthinkable to hold an event requiring such security as a G8 summit to be held in Northern Ireland.

The main lesson of Enniskillen should not be lost on the G8 leaders gathered on its outskirts: warring factions will only come to the negotiating table when they see the futility of their military efforts. To those who advocate arming the Syrian rebels, the Troubles offer even more food for thought.

Throughout its military campaign, the IRA enjoyed support from the Irish community in the United States, which saw the British government as a brutal oppressor of their brethren in Northern Ireland. It raised money and procured weapons and explosives for the IRA.

What to expect from Obama and Putin in Ireland

London had a very dim view of such support and tried in vain to discourage it. It shrank of its own accord when the Irish-American opinion leaders began to disapprove of the IRA’s military exploits.

The people of Enniskillen had to endure seven long years after their tragedy for the peace process to begin. Do the G8 leaders enjoying the tranquility of its surroundings have as much time to stop the bloodshed in Syria?

Nikolai Gorshkov is a freelance writer based in London. He served as a BBC correspondent in Eastern Europe from 1979-2012, including a term as the head of the BBC office in Ukraine.