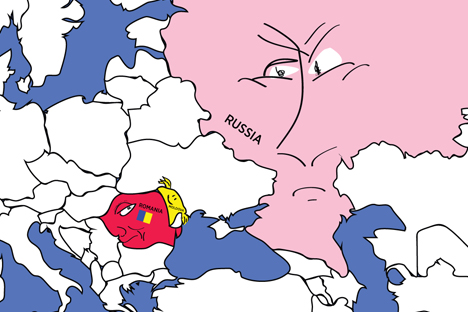 A push by the European Union for a “speedy solution” to the problem, backed up by promises of Moldova’s integration into the EU as a reward, can have a negative effect.

The escalation of tensions between the small post-Soviet republic of Moldova and its secessionist region of Transdniestria is interpreted by the bulk of the Western press and the officials of the EU structures as one more manifestation of Russia’s “imperial” policies in the region.

The fact that Transdniestria’s authorities have themselves taken the decision to establish border checkpoints on the demarcation line that divided Transdniestria from the rest of Moldova since a brief war between them in 1992, is generally ignored in Europe.

Opinion: Europe 2020: What is the future of integration?

Brussels and other European capitals are still set to view the situation in the new independent states on the territory of the Soviet Union via the old dichotomy of “bad” pro-Russian and “progressive” pro-Western regimes.

Few newspapers report that the present round of changes was actually started by the decision, taken in Moldova’s capital Chisinau in April, to impose limitations on the citizens of Russia, living in Transdniestria (about 150 thousand people) and forming one-fourth of Trandniestria’s population.

The Moldovan authorities said they did it in order to establish order on the future eastern border of the European Union, which Moldova plans to join.

“In Transdniestria, the scanning and checking of Russian passports at the checkpoints was interpreted as Moldova’s move into the EU and its possible merger with Rumania – a move away from Transdniester, Russia and Ukraine,” comments Svetlana Gamova, a specialist on Moldova and a longtime resident of Transdniestria, now writing for Nezavisimaya Gazeta in Moscow.

For Transdniester, this meant the necessity to strengthen the still unofficial “intra-Moldovan” border and to prepare for an eventual new conflict.

If one considers Moldova’s tumultuous history, one can understand the dramatic character of the situation. Moldova’s capital Chisinau and most of the modern Moldova’s territory were part of Rumania until the World War II.

Meanwhile, the territory of what is now Transdniestria between 1920s and  1940s formed a small Moldovan autonomy inside what was then Soviet Ukraine. Twenty years of tumultuous change inside Joseph Stalin’s Soviet Union made this part of Moldova a very different place.

Related topic: Fall of the USSR

With is mixed population of Moldovans, Russians and Ukrainians, Transdniestria reacted very nervously to rumors about Moldova’s “reunification” with Rumania in the early 1990s, when new geopolitical reality was quickly being formed in the wake of the collapse of the Soviet Union.

This nervousness triggered a brief war in 1992, after which the post-Soviet lava froze there for a time, with the river Dniester dividing Moldova and the still unrecognized state of Transdniestria.

Since then, a number of attempts were made to resolve the problem in the framework of the so called 5+2 negotiations (Moldova and Transdniester as sides in negotiations, with Russia, Ukraine and the OSCE acting as intermediaries and the EU and the US as observers).

A number of facts contradicted Western stereotypes on the matter. For example, a change of faces in the presidential palace (Yevgeny Shevchuk won the hotly contested presidential vote in 2011 against the longtime local ruler Igor Smirnov, denounced as “Soviet-style dictator” by the Western press).

Or the fact that at a certain moment Russia in fact supported Moldova’s drive for reunification with Trandniestris in 2003, when Russia’s representative Dmitry Kozak suggested a peaceful settlement for the problem, rejected in the last moment by Moldova’s president Vladimir Voronin under pressure from the OSCE.

Russia steps up support of its citizens abroad

Even now, stereotypes continue to block the road to a peaceful settlement. The good working relationship, which had established itself between Transdniester’s Yevgeny Shevchuk and Moldova’s premier Vlad Filat before the collapse of the Moldovan ruling coalition several weeks ago, is not a guarantee against a possible new explosion of the Moldovan volcano.

In fact, a push by the EU for a “speedy solution” to the problem, backed up by promises of Moldova’s integration into the EU as a reward, can have a negative effect. In order to achieve progress, one should not reject compromise.

Dmitry Babich is an analyst at Voice of Russia radio station and has commented on geopolitics for various world media including the BBC and RT.