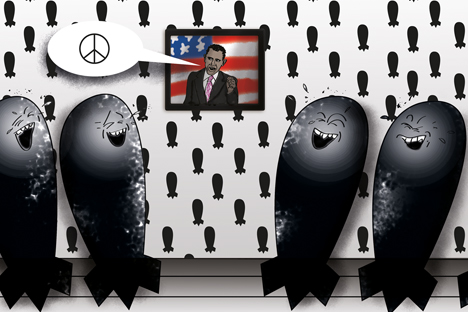 U.S. President Barack Obama's recent speech in Berlin indicates that he remains an "idealist with many illusions" when he proposes more vigorous nuclear reduction.

Addressing a crowd at the Brandenburg Gate in Berlin on June 19, 2013, U.S. President Barack Obama could not but recall that, exactly 50 years earlier, another U.S. President, John Kennedy, had delivered his famous “Ich bin ein Berlliner” speech in Berlin. Obama recalled that fragment of Kennedy’s speech where the former president predicted the arrival of “peace with justice” in a world where freedom would triumph and Cold War dividing lines would disappear.

More: Putin and Obama search for a positive agenda

Nevertheless, many of Obama’s other “Prague theses” concerning nuclear disarmament have still not been implemented. For instance, the United States has not yet ratified the CNTBT, which prevents the treaty from coming into force. Talks on a treaty to ban production of fissionable materials, which Obama expanded on in 2009, never started.

Moreover, North Korea has since carried out two nuclear tests, and suspicions about Iran’s nuclear program have only increased. Meanwhile, the new Offensive Reduction Treaty, in spite of all its pluses, has shown that neither Russia nor the U.S. will be ready in the coming decade to cut their strategic weapons below the levels set by the 2002 START Treaty.

Lavrov: Talks on further nuke cuts have to involve not only Russia and U.S. but also other countries

On the day Obama spoke in Berlin, the Russian president declared that Obama’s proposals were impossible to implement at present.

“We cannot allow the balance of the strategic deterrence system to be upset, to lower the effectiveness of our nuclear forces,” Vladimir Putin said during a meeting on the state defense contract.

Deputy Foreign Minister Sergey Ryabkov added that Russia “cannot endlessly agree on bilateral cuts and limitations of nuclear weapons with the U.S.” According to him, “lending the disarmament process a multilateral character is becoming an ever more pressing task.”

The multilateral nature of any future nuclear disarmament talks is not the only Russian condition for continued nuclear reductions. Russian leaders have set out these conditions more than once since 2009. First, Russia and the U.S. should comply with their commitments under the new START, under which cuts would only be completed in 2018.

The RBTH comix: A new round of US-Russia negotiations. CLICK TO READ MORE.

By the same token, after 2018, cuts would be possible if the ABM problem were solved, development of space weapons and non-nuclear strategic arms were limited, and other nuclear powers joined the disarmament process.

Obama must have known these preconditions when he spoke about disarmament in Berlin. What was the aim of his initiatives?

First, practical steps in the field of nuclear arms control and disarmament rhetoric remain his foreign policy trump cards. Second, in Berlin, Obama positioned himself as an ideologist and builder of the “peace with justice” predicted by Kennedy. According to Obama, “peace with justice means pursuing the security of a world without nuclear weapons – no matter how distant that dream might be.”

At the same time, to come up with any initiatives in such a difficult sphere as disarmament, one has to remain “an idealist without illusions,” as Kennedy described himself. Judging from the Russian response to Obama’s proposals, the “world of peace with justice” and the “world free of nuclear weapons” referred to by Obama are, so far, ideals that have nothing in common with the real interests and possibilities of its future inhabitants.

Alexander Kolbin isa research fellow and coordinator of the Russia and Nuclear Non-proliferation Program at the PIR Center.