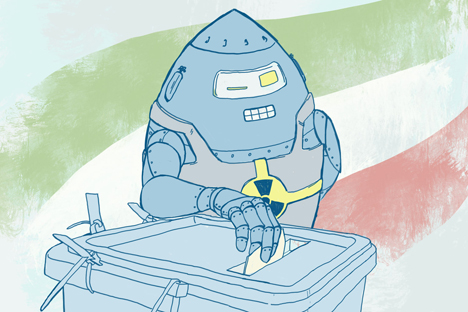 It is evident that Moscow's relations with Teheran are unstable and the outcome of Iran’s presidential elections doesn't change matters.

A presidential election took place in the Islamic Republic of Iran on June 14, 2013. Amid a high voter turnout – and despite the opinion of most Russian experts – the moderate conservative Hassan Rouhani won in the first round.

His victory was largely the result of support from allies of Mohammad Khatami and Ali Akbar Hashemi Rafsanjani, implying a line for substantial modification of the country’s domestic and foreign policy.

Such expectations are most likely inflated. That being said, a certain compromise between Iran and the West – including on the nuclear program– is quite possible.

To achieve this, it is enough for Iran to suspend uranium enrichment from 5 percent to 20 percent, in exchange for a softening of the European Union’s banking and maritime insurance sanctions.

On the other hand, it is Iran’s Supreme Leader Ayatollah Ali Khamenei who has direct control over its nuclear program. He appoints the head of the team engaged in negotiations with six international intermediaries on the settlement of the Iranian nuclear crisis.

Iran’s Supreme National Security Council secretary, Saeed Jalili, who is not prepared to seek a viable compromise with the West, is performing these functions at present.

Replacing him with, for instance, the skilled diplomat Ali Akbar Velayati would signal the Supreme Leader’s readiness to adjust the foreign policy in complete agreement with the national interests not only of Iran but also of the West.

It would be naïve to expect Hassan Rouhani to deliver quickly. His inauguration will only take place in August, while the formation of a government – which will still need to be approved by the Medjlis (Iranian parliament) – will take several more months.

The new government will realistically be able to get down to business only by the end of 2013, assuming its activities are not sabotaged by local authorities that still largely support Mahmoud Ahmadinejad.

Iran’s desire to ease excessive tensions with the West and the Gulf monarchies can only be welcomed. Yet far from everyone supports this policy inside the country.

The situation is even worse externally: Saudi Arabia and Turkey are vying for regional leadership with Iran, and any NATO attempt to intervene in the Syrian conflict militarily would directly threaten Tehran’s interests in the Middle East. Rebuilding relations with the outside world will be extremely difficult in this sort of environment.

All of the above directly affects Russian-Iranian relations, which have entered a phase of significant uncertainty.

During Mahmoud Ahmadinejad’s rule, Moscow was more concerned with preventing an increasingly likely missile strike by Israel against Iranian nuclear and military installations – and, by all means, avoiding being sucked into a confrontation with the West.

Now there is a question of how far the Iranian leadership would go to soften the extremely harsh financial and economic sanctions imposed by the United States and its allies and partners.

Those concerns are exacerbated by some international experts, who, having succumbed to electioneering rhetoric and their own somewhat far-fetched ideas about the aspirations of Iranians for a Western-style democracy, are trying to portray Hassan Rouhani a reformer – something he never was in the first place.

As a matter of fact, Iran is only considering a compromise that the West views as concessions in exchange for a softening of the sanctions. The proud Iranians hardly consider concessions to be acceptable.

Moreover, the approach takes little account of reality: The West’s ability to stifle Iranian oil exports has been all but exhausted, given the reluctance of China, India, Japan, South Korea and Turkey to participate and the increasing availability of other sources of revenues for Iran’s government.

There is no doubt that the state of Russian-Iranian relations depends heavily on both countries’ relations with Washington. In the event of a confrontation, the need to coordinate mutual efforts in order to deter the U.S. regionally would considerably increase.

Should relations with the U.S. improve, there could even emerge an opportunity for trilateral cooperation. Worse, however, would be if Iran started looking for a compromise with the West while Russia was not able to find it on missile defense; this would make any negotiations on reducing not only nuclear but also conventional arms impossible.

This would create tensions between Moscow and Tehran, given their rather complicated bilateral relations. Their unstable relationship is due not only to the mid-1990’s anti-Iranian Gore-Chernomyrdin agreement, but also to a number of later developments.

In particular, the Iranians cannot forgive Russia for refusing to supply them with the S-300 anti-aircraft missile systems and for what they believe is Moscow’s deliberate delays with completing the Bushehr nuclear power plant.

The current Iranian leadership has also created a lot of problems for Moscow by, for example, failing to comply with their obligations in the nuclear sphere. This has served as a basis for forming a “cautious” partnership between the two countries.

Right now, it is rather difficult to predict how Russian-Iranian relations will develop, even in the short term. It is evident that they are unstable, and not only due to the outcome of Iran’s presidential elections.

There are also weak trade and economic ties, diverging national interests in Afghanistan, Syria and several other countries, and Iran’s desire to establish a full-cycle nuclear fuel capability (which may serve as a science and technology basis for developing nuclear weapons), in addition to historic and cultural reasons.

Consequently, there is an urgent need for Moscow and Tehran to find a fundamentally new approach to developing bilateral relations – and approach free from political considerations and the evolving regional situation.

Only in this case will the two countries be able to establish to an actual partnership in the political, economic and security spheres.

Vladimir Evseyev is the director of the Center for Social and Political Studies.