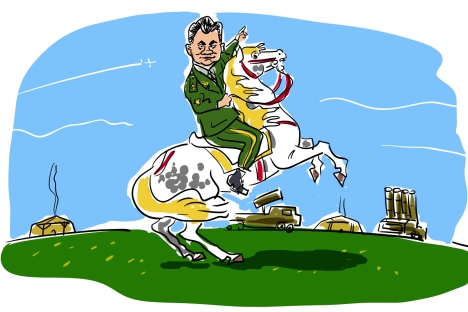 With Bishkek’s decision to reject the lease of the NATO-U.S. transit center at Manas, another Central Asian is moving closer to Russia.

On June 20, 2013, the parliament of Kyrgyzstan voted to reject the treaty regarding the lease of the NATO (essentially U.S.) transit center at Manas airport just outside the country’s capital. This means that the entire center’s infrastructure has to be dismantled by July of next year.

From the time the American airbase appeared on the territory of Kyrgyzstan in 2001, speculation became rife about its possible closure. The leadership of the Central Asian republic repeatedly raised the issue of closing the military facility – and each time it was granted various preferences by Washington.

Naturally, the leadership of Kyrgyzstan was also wooing Moscow, which is very sensitive to foreign presence (especially military presence) on the territory of the former Soviet Union.

Thus, in 2009, the second president of Kyrgyzstan, Kurmanbek Bakiyev, declared during his visit to Moscow that the American airbase was closing down; he even signed a law to that effect. Yet, several weeks later, he declared that the decision was not final. As a result, an agreement was reached to set up a transit center to support NATO operations in Afghanistan instead of an airbase.

The issue was revisited after the revolutionary upheavals that swept Kyrgyzstan in 2010. A year later, the third president of the republic, Almazbek Atambayev, declared that he would like Manas to be a civil aviation transport facility rather than a military one. He stated that a foreign military presence at the capital’s airport was not the best symbol for a young state.

So, does that put a full stop to American military presence on the territory of Kyrgyzstan? Or is this just the dots of suspension?

Today, looking at the processes over the vast expanse of the former Soviet Union, the interests of Russia and Western countries tend to be seen in terms of 19th-century international policy. Rudyard Kipling’s image of “the Great Game” has been widely (and often inappropriately) quoted.

Yet, in reality, Central Asian geopolitics today is an example not of a “Great Game” based on fierce competition among several power centers, but rather an illustration of their multiple interdependencies. On the one hand, Moscow sees the post-Soviet space as a zone of its exclusive interests and is following the principle of preferences in exchange for preferences.

The Russian side receives preferences in the military-political and energy spheres, and its partners receive concessions on taxes, credits and immigration issues – a very important subject for all the Central Asian republics. For instance, in September 2012, President Vladimir Putin visited Kyrgyzstan, where Moscow agreed to extend its military presence in the republic (the Kant base) until 2032 and implement joint hydro-energy projects.

Russia also agreed to write off $189 million of Kyrgyzstan’s debts.

Russia’s relations with Tajikistan are following much the same pattern. On the other hand, unlike Ukraine and the South Caucasus, Moscow is demonstrating much greater readiness to cooperate with the United States in Central Asia – not the least reason for this being the operation in Afghanistan.

Moscow dreads the prospect of a collapse in Afghanistan following the departure of the Americans and their allies, so it is prepared to suffer American military presence in the Central Asian republics.

True, the last point calls for a reservation. Moscow is not interested in such presence being expanded, because, in that case, Washington would lose interest in Russia as a regional player. If it is possible to build relations with the countries in the region directly, why bring in Moscow?

Even so, the Central Asian states have, over the last two decades, learned to diversify their foreign policy contacts. Even Russia’s key strategic partner in Eurasia – Kazakhstan – has, in recent years, been repeatedly lauded by Washington for its effective cooperation. Today, the option of opening a new NATO transit center in Kazakhstan is being actively discussed by the expert community.

In short, one should not draw hasty conclusions about the end of American military presence in Kyrgyzstan. Perhaps Bishkek wants to “raise the bar” in its relations with NATO and the United States. If so, Moscow has limited opportunities for preventing such a scenario. It is also unlikely to fight to the last to do so, especially considering the existing agreements with the government of Kyrgyzstan.

Sergei Markedonov is a visiting research fellow at the Center for Strategic and International Studies in Washington, D.C.