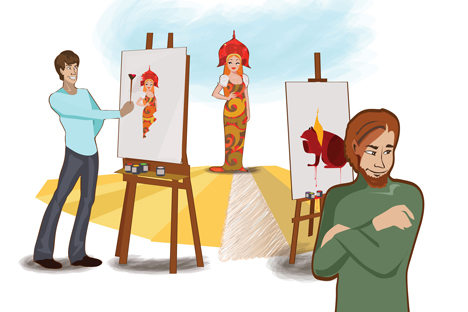 Outdated stereotypes served by the mass media leave Europe with an often inaccurate and incomplete image of Russia, which in turn affect cooperation between them.

Drawing by Alena Repkina. Click to enlarge the image

This simplifies the flow of information, and, at the same time, informs the European viewer and reader as quickly as possible.

Photo of the day: Putin dives to the bottom of the Baltic Sea

In terms of content, the most popular views of Russia can be summarized in the following ways:

1. "Vladimir Putin is the dictator of a police state."

2. "Any opposition movements are, by definition, democratic and, without a doubt, can only benefit Russia."

3. "Any legal proceedings against the opposition are, first and foremost, harassment by the authorities, and the object being harassed is a model of morality and purity."

As a result, European viewers receive information that is not only incomplete, but also often inaccurate. For example, outside opposition is depicted by Western media as having a single ideological platform that represents a real alternative to the government of Vladimir Putin.

Europeans who receive their news exclusively from the mass media have no idea the opposition movement does not have a positive program that would be supported by a majority of its members; because the opposition itself is so diverse, they could not have such a program.

Another topic raised by the media, regardless of current events, is the policy of Russian authorities in Chechnya, which is presented as a series of war crimes and continuing violence in response to the demands of an oppressed local population to secede from the Russian Federation.

The fact that the demand for independence has been put forward by soldiers and not the civilian population is not even mentioned.

An example of this is the documentary film on Russian prisons that was recently shown on the LCP TV channel (La Chaîne Pаrlementаire, or The Parliamentary Channel, is a major analytical television).

The film draws parallels between the conditions of prisoners in modern Russia and conditions in the time of the Gulags. The testimonies and comments tirelessly remind the viewer of 1937 and eventually lead to equating Putin with Stalin.

This "documentary" film was repeatedly broadcast on one of the national channels, in spite of the fact that it is blatant propaganda in both form and content.

Delivering information like this is based on two basic rules of modern journalism: simplifying and, sometimes, vulgarizing information, as well as giving priority to national information over international.

The first is expressed by the fact that stereotypes allow mass media to simplify information for the readers. The second rule leads to broadcasting international news that is one-dimensional. As a result, Vladimir Putin and the Russian authorities are presented as absolutely evil.

Without a doubt, the image of Vladimir Putin and Russia suffers. This, in turn, has very tangible political consequences.

During official visits of heads of European countries to Russia, or visits of high-ranking Russian officials to Europe, the agenda always includes a discussion of human rights, the situation in Chechnya, the opposition movement and the conditions of political prisoners, because Moscow's official position often remains unknown to the European public.

As a consequence, political, trade and economic cooperation with Russia is limited, since any cooperation with a "dictatorial regime" negatively impacts the image of European leaders and reduces their electoral rating.

More effective in this situation would be for the Kremlin to develop a consistent communication strategy that would create a favorable international image of the head of the state and the country as a whole.

With this strategy, the authors are in no way suggesting propaganda that would simply sing the praises of leaders: Such a method in today's conditions would cause even more damage and would be, at best, severely criticized by the European media.

It is necessary, instead, to focus on reporting to the European public the complete story and explaining the position of Russian authorities on key issues of domestic and foreign policy.

The Russian leadership could certainly continue to ignore the fact that the image of Russia abroad is deteriorating.

In such a case, however, we will have to accept the fact that the visits by the president of the Russian Federation to European countries will take place in an almost clandestine environment, and, when news is reported on the protest movement, only the outside opposition will be given a chance to comment.

Toma Genole is a political scientist and professor at the Paris Institute of Political Sciences. Katerina Ryzhakova is a communications consultant.