Snowden: Protagonist in a tragicomedy 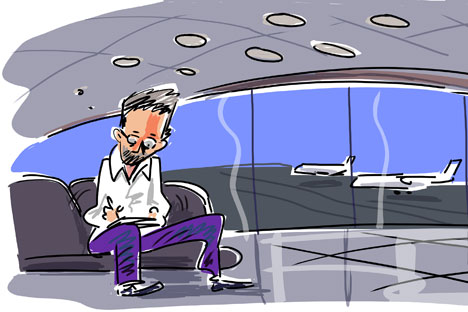 Edward Snowden’s story started out as a spy thriller, went on to become a farce, and is about to turn into a drama laced with elements of human tragedy.

The genre of tragedy is increasingly applicable to Snowden as a lead character: Having taken a stand for personal freedom and dignity, he clearly had not anticipated what would happen to him next.

The former U.S. intelligence contractor has essentially become hostage to big politics. As it turns out, he is a nuisance to everyone, no one except the U.S. justice system wants him, and civil society—in the name and on behalf of which he acted—is either biased or powerless before the supreme interests of the state.

Take note, future whistleblowers: A lonely idealist is doomed; only reliance on powerful entities which, for some reason or another, are interested in changing the status quo will help you. Incidentally, this is how it used to work in the past, when a dissident from either side of the “iron curtain” automatically received support from the other side.

Russian expert doubts relations with U.S. will go off track over Snowden

Yet, apart from the moral aspect, the Snowden case also has a political dimension, primarily concerning Russian-American relations.

The United States has found itself in a position to which it is not accustomed. Normally, it was the U.S. that granted asylum to “truth seekers” persecuted by their own governments. Now that the tables have been turned on them, Americans are listening perplexedly to the same arguments they used to throw at other countries.

Although the attitude toward the fugitive within the U.S. is ambivalent (many are clamoring for an investigation into the facts he disclosed and an end to the surveillance practice), the prevailing point of view is that he broke the law (the surveillance was not formerly illegal) and deserves to be punished anyway.

America is a country of legal experts. The judiciary is the most influential branch of power, and it enjoys indisputable authority. This is why, when someone has to face the American justice system—considered to be fair and independent by definition—no other arguments are even considered. A refusal to deliver someone to an American court of law is viewed as an act that is not merely politically hostile, but also morally unacceptable.

This puts the White House in an awkward position. Barack Obama is under strong pressure. Accusations of his inability to get Moscow to extradite Snowden mask a far deeper problem than just the president’s weakness as the leader of a superpower: In fact, he comes across as a traitor to the sacred ideals of the law, which is the cornerstone of the American worldview.

The idea that punishment is unavoidable no matter what it takes has not changed over the past 150 years, although the methods have certainly done so. Snowden has every opportunity to see for himself how this works, as some Russians—such as the arms trader Bout or the pilot Yaroshenko—did before him.

Whether they are guilty or not is not the point here; what is important is the American Lady of Justice’s deep conviction that no sovereign rights or jurisdictions of other countries can obstruct the workings of the law.

It was partly for this reason, which is rooted deep in the American mentality, and partly because America has grown unaccustomed over the last 25 years to some other country refusing to satisfy its insistent demands, that Washington has clearly taken the wrong approach to the Snowden case.

The approach is based on the assumption that, if enough pressure and threats of negative consequences are put on Russia, or if the United States explains how important it is for it to get the fugitive back, Moscow will cave in.

Yet an impartial analysis shows that the Russian leadership cannot extradite Snowden for moral, political, or even legal reasons—even though no one is really excited about his presence in Russia and the Kremlin would be happy get rid of the poor whistleblower in a heartbeat.

On the other hand, the Russian leadership’s desire to distance itself from Edward Snowden, to show that they have nothing whatsoever to do with this whole story, is beginning to appear somewhat contrived. Of course, it is possible to continue pretending that he is a regular undocumented applicant whose case the Federal Immigration Service is considering in the normal course of business. Yet this is clearly not so: His case has made too many waves internationally.

The longer the applicant languishes in the transit area with an undetermined status, the stronger the pressure will be that Washington puts on Moscow, in the hopes of preventing it from granting Snowden asylum. Consequently, the harder it will be also for Obama to let the situation slide.

Since a positive response to Snowden’s application is essentially inevitable, it is better to clear things up once and for all and let the former NSA contractor leave the “no-man’s land.” Should the White House decide that Obama’s visit would be impossible under the circumstances—well, that would be a pity. But this is not the end of Russian-American relations. This too will pass.

Fyodor Lukyanov is the chairman of the presidium of the Council on Foreign and Defense Policy.