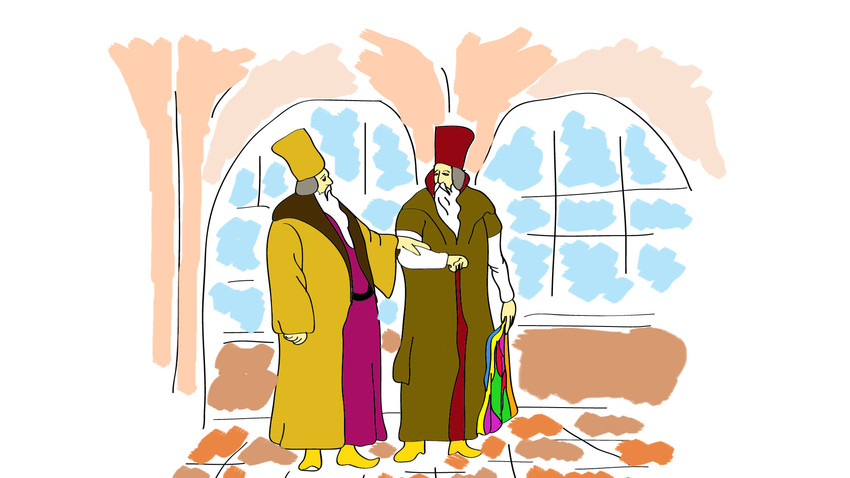 Dan Pototsky
Russians’ tolerance of gays and lesbians has varied throughout history, although periods of increased authoritarianism have always resulted in a crackdown on homosexual behavior.

On Jan. 25, Anton Krasovsky, editor-in-chief of Kremlin-backed television channel Kontr-TV, came out during a live broadcast. “I’m gay, and I’m just the same person as you, my dear audience, as President Putin, as Prime Minister Medvedev and the deputies of our Duma,” Krasovsky said.

But you won’t find a video of Krasovsky’s announcement anywhere on the web. It was deleted from Kontr-TV’s website, along with Krasovsky’s own corporate e-mail account and any pages about him.

Krasovsky was forced to resign from his position three days after he made the statement. According to Krasovsky, the uproar over his coming out wasn’t necessarily the announcement of his sexual orientation, but that he said he was the same as everyone else.According to surveys conducted by the Levada Center polling agency,

According to surveys conducted by the Levada Center polling agency, homosexuals are eyed warily in contemporary Russia, to put it mildly. A poll taken in April 2013, showed that 35 percent of respondents consider homosexuality to be a disease and 43 percent characterized it as a bad habit.

Only 12 percent of those who answered the poll said that homosexual orientation is normal. When asked if the rights of gay people should be the same as those of straight people, 47 percent said no while 39 percent supported equality.

Where do these attitudes come from?

In ancient Russia, sexual relations between men were condemned by the church. This question is addressed in the 13th century book “Voproshenie Kirika” (Kirik’s Questions), in the “Kormchaya ” of the 14th century, and later in the well-known “Domostroy,” a 15th century code of domestic rules for living as well as the “Stoglav,” a law code of the same era.

The church was concerned with sodomy particularly among the clergy, where these acts were punished by excommunication. For ordinary people, however, a period of penance ranging from eight years in the 13th century to three years in the 15th-16th centuries, was enough to earn forgiveness for this sin.

Meanwhile, in Europe at the time, the sin of sodomy often led to a death penalty. Lesbian relationships in Russia were perceived as less sinful, with penance being as short as 12 to 40 days.

Homosexuality is repeatedly mentioned in medieval Russian literature, including in the “Lives of Boris and Gleb,” and in the writings of Filofey and Metropolitan Daniel of Moscow. While complaining about the widespread nature of this sin, writers at the same time acknowledged its presence.

In the 15th-17th centuries, male homosexual contacts were not uncommon among the young men of the nobility: even Tsar Ivan IV (the Terrible) had close relations with young noblemen, most notably Fedor Basmanov, who was called the “Tsar’s lover” by many contemporaries – from Russian prince Andrey Kurbskiy to foreign mercenaries in the Russian service, including Albert Schlichting and Heinrich von Staden.

English poet George Turberville, who accompanied English Ambassador Thomas Randolph on his voyage to Moscow in 1568, noted in his “Poems describing the Places and Manners of the Country and People of Russia” that “although muzhik (man) has a decent spouse, he prefers his sodomite friend to her.”

The prevalence of homosexuality in Russia is also mentioned in the memoirs of Sigismund von Herberstein, Adam Olearius Juraj Krizhanich – all of whom state that male homosexuality existed on all levels of society and was not treated as a crime.

This came as a shock to the Europeans since on the Continent, even a faint hint of a person’s homosexuality was taken as a harsh insult. Historian S. Solovyov later noted in Chapter 1, volume 13 of his “History of Russia from the Earliest Times” that in the late 17th century “nowhere in the East or West was this sin looked upon so lightly as in Russia.”

The first penalties for homosexual relations were introduced in the Russian army in 1716 by Peter the Great. Offenders were given corporal punishment, and, in the case of same-gender rape, exile; but those penalties existed only in military statutes that applied only to soldiers.

In the 19th  homosexuality remained among artists, poets civil servants. Prince A. N. Golitsyn, minister of public education, was known as a flaming homosexual, as reflected in letters of N. Yazykov and in a famous epigram by poet Alexander Pushkin, which “to press [Golitsyn] from either side, more from the back, where he’s the weakest.”

Another minister of public education, Count S. S. Uvarov, author of the “Official Nationality” ideological doctrine, was known to engage in same-sex relationships although he was married and the father of several children.

One of his favorites was Prince Mikhail Dondukov, who used Uvarov’s protection to angle for the position of vice president of the Russian Academy of Sciences. This appointment also did not escape Pushkin’s ironic eye – another of the poet’s epigrams notes that Dondukov acquired his post thanks to his behind. Aside from short epigrams, verses dedicated to manly love can be found also in the works of other poets of the time, including Ivan Dmitriev and Mikhail Lermontov.

It is clear from these examples that in the 19th century, homosexuality in Russia was looked upon rather ironically than with serious condemnation.

In 1832, under Emperor Nicholas I, the first criminal clause for homosexual contacts was introduced. It gave the penalty as to Siberia. The clause was hardly ever used, however, since any application of such a penalty would have ended in a scandal, which was highly undesirable for noble society.

Towards the end of the century, same-gender relations flourished in the Bohemian circles and among the highest nobility, including the royal family. The homosexuality of Great Prince Sergey Alexandrovich, Governor General of Moscow, was widely discussed in Russian society and acknowledged by contemporary politician V. Obninsky.

It was later mentioned by writer Nina Berberova, historian V. Balyazin American researcher Virginia Cowles. Great Prince Konstantin Konstantinovich also known as a poet, confessed his gay relationships in his diary, which, according to the prince’s will, was to be published no sooner than 90 years after his death (it came out in print in 1994).

After the revolution of 1905 ended literary censorship, gay literature started to appear, allowing homosexuals to express their feelings in poetry and prose. One notable example includes the semi-autobiographical novel “Wings” by Mikhail Kuzmin, which contains the first detailed description of love between two young men.

Lesbian relationships were depicted in novels by Lidiya Zinovyeva-Annibal, works of Zinaida Gippius, and the poetry of Sofya Parnok and Marina Tsvetaeva. The romance of the latter two is arguably the most famous lesbian relationship in the history of Russian literature.

After the Bolshevik Revolution and the establishment of the Soviet Union, homosexuality was roundly condemned. Homosexuality was declared a bourgeois vice that was to be eradicated totally, following the class approach utilized by Bolsheviks during the building of .

In 1934, sodomy was criminalized and subjected to five to eight years in a prison colony. The number of people convicted for homosexual relations in the early years of the Soviet state remains classified; American researcher Dan Healey states that figures from 1934 to 1950 are fragmented and data from 1951 to 1960 is absent completely.

In the 1990s, public opinion against homosexuality began to soften. A Levada Center poll conducted in April 1998 showed that 18 percent of respondents considered homosexuality to be normal. In 2005, poll results noted that 51 percent of Russians supported equal rights for gay and straight people.

From 1993 to mid-2000s, a certain liberalization of sexual life in Russia took place, which was reflected in a flourish of gay literature, issuing of gay poetic almanacs and the organization of poetic festivals dedicated to LGBT themes.

In recent years, however, attitudes towards homosexuals have become increasingly negative.  This is partially due to the influence of the post-Soviet Russian Orthodox Church, which restlessly preaches against homosexuality.

“The Foundations for the Social Conception of the Russian Orthodox Church,” issued in 2000, says that the church “would resolutely resist attempts to view the sinful tendency as normal,” adding that the church “condemns all propaganda of homosexualism (sic)” and says “all persons who advocate of life should not be allowed to work with children and the youth, or be in charge in the military or in penitentiary institutions.”

Although attitudes toward gay and lesbian relationships were quite tolerant in Russia’s early history, anti-gay measures were taken by Russia’s most authoritarian leaders – including Peter the Great, Nicholas I and Joseph Stalin – in their attempts to minimize social diversity.

While for the moment the shadow of criminal penalties for homosexuality hangs heavy, with raising tolerance towards the LGBT movement, especially among Russia’s younger generation, there may still be hope for tolerance.

The author is a historian.