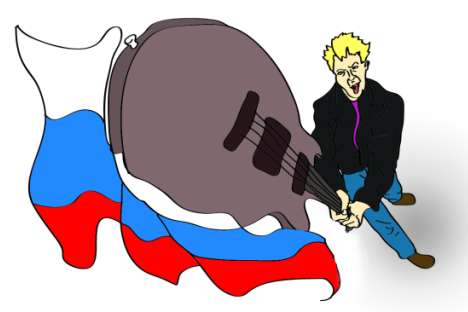 By punk standards, the scandal in Russia caused by the American punk band was a huge success.

The American band Bloodhound Gang defiled the Russian flag during their concert in the Ukrainian city of Odessa. The news caused outrage in Russia, relegating stories about Snowden, opposition rallies and even economic inflation to the background.

The situation is ugly and painful, but, on the other hand, when have alternative musicians ever been charming and flattering before the public? The history of punk began when the Sex Pistols swore obscenities on the air and insulted Queen Elizabeth.

They immediately received a response: The musicians were brutally beaten in the street and the record company terminated their contract with the group.

Something of the sort happened with the Bloodhound Gang: In Anapa, Russia, they were pelted with rotten eggs; at the airport, two Cossacks tried to attack them; their concerts in Russia were canceled.

However, in the case of the Sex Pistols, the state did not intervene in the conflict. As reported by Interfax, Anapa police have already started checking, assessing the actions of Bloodhound Gang bassist Evil Jared Hasseloff against Article 329 of the Criminal Code ("Violation of the National Emblem of the Russian Federation or the national flag of the Russian Federation"). The article proposes up to one year of imprisonment for the offense.

Moreover, deputies have already started to comment, calling the bassist’s action a planned anti-Russian demonstration. The deputy speaker of the State Duma, Sergei Neverov, demanded the establishment of the identity of whoever invited the group to perform in Russia.

As a consolation, the Duma deputies can be sure that the Bloodhound Gang does not have it out for Russia alone. As Vesti.ru reported a day before the profaning of the Russian flag, the band urinated on the Ukrainian flag during a concert in Kiev.

For committing abusive acts against Ukrainian national symbols, the law provides a penalty of six months in prison, or a fine of $105. However, Ukrainian security officials at the event ignored the incident, and the audience greeted all that was happening with laughter.

What seems to matter most is where the provocations occur and who is provoked. Kiev is a large metropolitan city. On the other hand, Kuban, which has canceled a Bloodhound Gang concert, is the “Russian Texas”—one of the most conservative and patriotic of Russia’s regions, focused on traditional values.

People in Kuban do not like the opposition, gays and people of non-Russian nationalities. These attitudes are not taken by residents on the instruction of the authorities, either. The Cossacks — essentially Russian cowboys — are quick to violence and consider themselves the defenders of national shrines.

However, if Russian punks wiped themselves with the American flag in Texas, they too would be in trouble. This is another thing New York — like Moscow or Kiev — has seen a lot of. There may not be any reaction to that kind of behavior at all, especially since the Stars and Stripes often suffers during rallies and demonstrations. Demonstrators, however, are protected from criminal prosecution by the First Amendment of the U.S. Constitution.

“Russophobia,” then, has nothing to do with this most recent display in Ukraine. Once, Bloodhound Gang wrote an alternative anthem of Pennsylvania, where they say a lot of hard-hitting things about their home state. As Russian punk icon Yegor Letov sang, "I will always be against it!” Punks might be against anything and everything.

This is just the way music is sometimes: dangerous. Half of the first bluesmen were criminals — banditry, obscenity, drugs. The great Elvis, who wobbled his hips suggestively on stage, was perceived as disturbing the public peace. Soviet rock musicians lived half of their lives being constantly hounded for illegal concerts featuring anti-Soviet songs.

Over time, however, the taboo has become less and less. The scandalous rapper Eminem has insulted everyone he can — gays, blacks, women, politicians and even his own mother — for which he received 13 Grammy Awards. With no one else to offend, this only leaves a creative crisis.

Why are musicians doing this? The answer is simple: to bring up strong emotions, strong reactions; to whip up, push apart and awaken humanity. Russian holy fools — the first Russian punks — were doing approximately the same. They said nasty and offensive things to the powers that be, obscenely danced and sang blasphemous songs.

Yet people get used to everything, and what once touched the consciousness eventually ceases to hurt. Today, nobody would be surprised to see nudity at a concert or hear foul language on the air. The Russian group Leningrad, which shocked the public with obscene songs in the first decade of the 2000s, sounds quite acceptable to the ear today. Consciousness has changed.

Authorities try to find out who invited Bloodhound Gang to Russia

Truly jarring groups are few and becoming fewer: It is all somehow embedded in the system. The 1990s and 2000s were the time for decorative, commercial protest that was insulting but understood as a joke. “The real rowdy are very few,” as Vysotsky sang.

This is why the public reacted so wildly to the performance of Pussy Riot in the Cathedral of Christ the Savior. Pussy Riot hit the most sensitive nerve in Russian society: They offended religious feelings. For that, they were ostracized and sent to jail.

Bloodhound Gang encroached on an equally sacred theme — a symbol of statehood — but received a favorable reaction. The worst insult for them would be the company taking no notice of Hasselhoff’s stunt, being completely ignored. By punk standards, that would be a complete failure.

Lucky for Bloodhound Gang, they were in one of the few countries where sacred values still exist and where the public knows how to properly respond to a punk band. What happened, according to the laws of the genre, can be considered a wild applause.

Yan Shenkman is a musical critic.