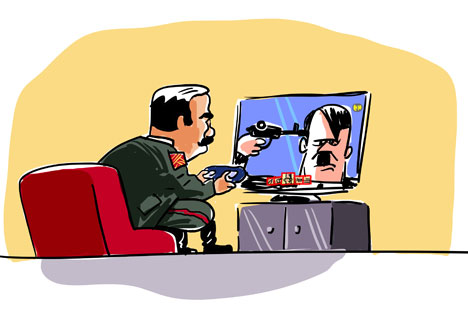 The ban on the sale in Russia of a Canadian video game about the Red Army reveals that the makers of video games have not become aware of their duty to responsibly shape people’s ideas about our world and our history.

The 1C-SoftClub Company has stopped selling the “Company of Heroes 2” (COH2) video game in Russia. This real-time strategy game, which was produced by the Canadian studio Relic Entertainment, relates to events that happened on the Eastern Front during World War II: The player has to lead troops of the Red Army in resisting the forces of Nazi Germany.

However, many controversial issues are interwoven with the gameplay. Thus, in one of the game’s tactics, you can quickly create a lot of cheap “conscripts” (in terms of conventional game resources) and put them into action; but, at any attempt to retreat, these units are shot by their own NKVD detachments.

View the gallery: Volunteers from "Memory Vigil" rebury the remains of WWII soldiers

In one of the episodes of the game, a commander coolly kills a sentry who left his post to save an officer. Explanation: “You should not have left your post.” Such controversial and frankly untrue gameplay features and stories, which are abundant in the game, have naturally led to resentment from Russian players.

These stories and interpretations also cause genuine outrage among the veterans of that war. “None of us were ever running away from machine guns, which were allegedly fired at our backs. We fought for our Motherland,” Ivan Karnaukhov, a veteran of World War II (or the Great Patriotic War, as it is called in Russia) who fought in the Battle of Moscow and at the Battle of Kursk-Orel, said in an interview with Samarskie Izvestia newspaper.

Yevgeny Bazhenov, a popular Russian video blogger nicknamed the “BadComedian,” made a video in which he humorously analyzes, in detail, the factual errors and ambiguous moments of the game for more than half an hour. On his initiative, a petition in support of a sales ban of this game in Russia has been signed by more than 20,000 people.

A similar situation occurred in 2009, with the Russian version of “Call of Duty: Modern Warfare 2.” The scene entitled “No Russian” had to be cut: In it, a player, as part of a group of Russian terrorists, shot innocent people in Sheremetyevo Airport. However, that story was different from the situation with COH2 in several ways.

First of all, the player could avoid shooting personally and just go along with the bandits (player was in the role of an undercover special agent who had infiltrated a terrorist cell). Second, in addition to the “Evil Russians,” there were also the “Good Russians,” who actively helped their American and British colleagues from the security services. Finally, this was just one of the game’s episodes, not the basis of the entire gameplay, as it is with the COH2—which is hard to simply cut from the game.

Video games have recently started to play a significant role in mass culture, reaching the same levels of acclaim as movie blockbusters and outstanding literary works. In addition, given the interactivity and addictive nature of this media, the importance of video games is only set to grow. Today, these games, along with books and movies, are already educating children and adults—shaping their world view, their knowledge, as well as supporting or refuting certain stereotypes. This fact lays some responsibility on the creators of this media.

Games are becoming more and more realistic, as well. In the same COH2, a special ColdTech is responsible for the simulation of cold: The soldiers freeze, snowstorms suddenly appear, ice and snow react to the fire of the troops.

However, in terms of cultural and conceptual content, most video games are still on the level of a maximalist teenager passing through that “transitional” period. Video games are marked by a certain spirit of rebellion, hooliganism and permissiveness—and, at first glance, there is nothing wrong here.

Still, situations similar to what happened with COH2 show that it is high time this new branch of the entertainment industry start following certain rules—the same rules that are followed by its “elder brothers” in media and films. At the very least, video games should not claim historical authenticity when palming off facts taken out of context.

It is not a bad thing for people to play video games. The main thing is that these games should not play the people by manipulating their minds.