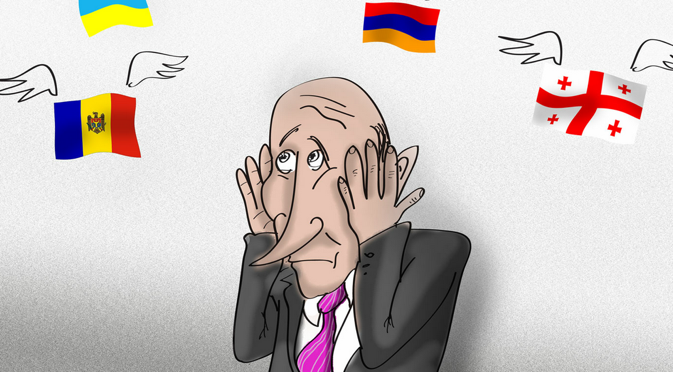 The value of integration with former Soviet republics is not taken for granted, but it is giving way to calculation of what is and what is not good, whether the game is worth the candle and whether the cost will exceed the benefits.

Moscow’s demonstrative trade sanctions against Ukraine and an unexpectedly warm meeting between the presidents of Russia and Azerbaijan in Baku suggest that the Kremlin is continuing to play hardball.

As the Eastern Partnership Summit draws near, where Kiev and Yerevan are to sign agreements on closer institutional ties with the European Union, Russia is making it clear that the move would change Moscow’s attitude toward these countries.

Although Russia has never officially taken an “either–or” attitude like the EU (the Europeans keep reminding Kiev and Yerevan that they have to choose between closer union with Europe or with Russia) and is stressing that the two projects are mutually complementary, it is clear that it is once again a zero-sum game.

The paradox is that the post-Soviet space has dropped on the scale of priorities for the leading players. Economic activities with regard to the former Soviet Union countries peaked in the middle and second half of the 2000s. The situation has now changed.

The United States is becoming more focused. Somewhat taken aback by the chaotic events in the world, the American “strategic community” is launching a debate on the priorities for the coming decades.

The days when the U.S. sought to be the leader and to be present everywhere seem to have gone. Priorities will have to be chosen, and it is hard to imagine that Ukraine and Georgia will loom as large on Washington’s agenda as they did 5–7 years ago. Interest in Central Asia has its limits, especially after the withdrawal from Afghanistan.

The EU is not going to expand or spend much on tying itself to the states east of its present borders.

Finally, Russia is perhaps the most interesting case. Its declared priority is to strengthen the Customs Union and create a Eurasian Economic Union on its basis. This is the aim of its foreign and economic policies, and all the former Soviet Union countries are invited to join.

Ukraine has been told how much it would lose if it signs an enlarged agreement on a free trade zone with the EU; Armenia has been warned that even its close ties would not be immune if a document on association with the EU were signed. Moldavia (owing to initial an agreement with the EU) is also reminded that it still has an opportunity to be of interest to Russia.

The irony is that Moscow itself does not quite know its own mind yet. Compared with the events of five years ago, there is less desire to integrate a great number of former Soviet republics. The value of integration is not taken for granted, but it is giving way to calculation of what is and what is not good, whether the game is worth the candle and whether the cost will exceed the benefits, etc.

Even the issue of Ukraine, whose importance as a member of the Customs Union is in no doubt, is not so black-and-white. There is the risk that Kiev—which will be a maverick in any association, haggling over every trifle — would simply paralyze the Union.

Ensuring security in Central Asian countries, let alone dragging them into alliances with Russia, is also a matter of some doubt. First, there is the issue of the price, and Moscow’s decision not to interfere in Kyrgyzstan in 2010 sent a telltale signal.

Second, one needs to bear in mind that public opinion is increasingly leaning toward the building of walls, not toward opening up the labor market for the members of the Eurasian Union — especially if it is joined by Central Asian states.

As for the South Caucasus, Georgia and Azerbaijan are outside the debate, because neither Tbilisi nor Baku (each for their own reasons) wants to join the Russian projects. Armenia cannot objectively be integrated either to the east or to the west.

The reason is not geopolitical rivalries among the big countries, but rather its actual isolation. Yerevan does not have and will not have any guarantors of its physical security other than Russia. It has to be said, for the sake of fairness, that Russia cannot do without Armenia, as it has no other reliable ally in the South Caucasus, which is important if only because of the problem of the North Caucasus.

Russia is in a state of transition, this being applicable to all the aspects of its policy. The post-Soviet era is over and nobody knows what the new era will be like—the path is being determined by trial and error.

As regards neighboring countries, Moscow has opted to bide its time. It would like things to be in a suspended, transitional state until it makes up its mind about what it wants.

The internal problems of the neighbors and their potential patrons in the West (and East) facilitate the task, because no one is prepared to face serious risks for the sake of Ukraine, Armenia, or Tajikistan. Yet, if Russia is slow in making up its mind, the vacuum will begin to be filled simply owing to the laws of nature.