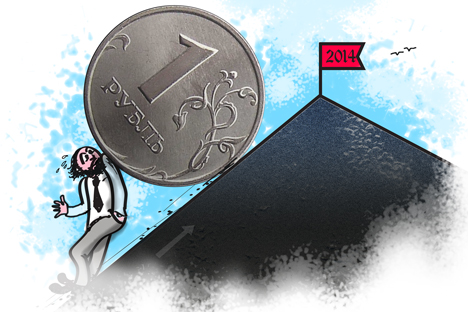 Unlike in Europe, Russia's economic slowdown is a self-inflicted wound. If Russia abandons in own version of austerity, growth will soon pick up - says analyst Ben Aris.

Russia never does things by halves. Before the global crisis of 2008,  the talk was of an economy overheating. But the latest data showing second-quarter GDP grew just 1.2 percent from a year ago suggests the country is sliding toward recession and the government seems, at first glance, powerless to stop it.

Russia today is a very different place from the boom years. Growth is well down from the 6-8 percent it was enjoying pre-crisis, and this year has been particularly disappointing.

Russia has just turned in the sixth  consecutive quarter of falling growth, meaning growth in the first half  of the year was 1.4 percent versus the 4.5 percent in the same period a year earlier. And the 3.5 percent rate widely forecast for the whole of 2013 at the start of  this year is now clearly unattainable.

There is a lot of confusion over what is causing Russia’s deepening slowdown. Ongoing capital flight, currently running at $6-7 billion a month, and pathetic levels of investment are big contributing factors.

High  interest rates and poor corporate borrowing are also slowing growth at  the superficial level. Going a big deeper, the lack of internal  structural reforms and external drag caused by the pan-European malaise are also serious drags on growth.

If the causes are external, then despite the recent poor results the Kremlin should be buoyed, as an economic recovery in Europe seems to be gathering momentum. "There are more convincing signs of a GDP rebound  [in Central and Eastern Europe],” Piotr Kalisz of Citigroup Capital Markets said in a note at the end of August.

“In Poland economic growth  accelerated to 0.8 percent year-on-year (from 0.5 percent) and was in between our and  consensus forecasts. Czech GDP increased by 0.7 percent quarter-on-quarter in  the second quarter, just a tick above below our forecast, which helped  to reduce the pace of contraction to 1.2 percent year-on-year. More importantly  this was the first quarterly expansion in the Czech Republic since mid-2011. Finally, Hungarian second quarter GDP grew by 0.5 percent  year-on-year, slightly falling short of our and market expectations (0.6 percent). While growth is picking up in Central Europe, it is still an  early phase of recovery.”

If the causes are internal, then Russia watchers should also be  encouraged. The Kremlin has launched, albeit half-heartedly, a major  anti-corruption drive and on the same day he retook office, President Vladimir Putin signed off on a raft of administrative reforms designed to lift Russia from 120th place on the World Bank’s "Doing Business" index to 20th by 2018. Still, it will take several years for either of  these reforms to have an impact.

Whatever the mix of reasons, the economy appears to have just passed  through the trough and is widely expected to recover in the second half of this year. Domestic demand growth accelerated in July, retail sales rose 4.5 percent, capital investment reversed its previous fall to gain 2.5 percent and inflation dropped to its lowest pace in eight months of 6.5 percent, down  from a high of 7.4 percent in May, according to Rosstat.

“July’s activity data  for Russia points to a modest improvement in the economy at the start of  third quarter... The data is encouraging, almost all indicators were  much stronger than we expected,” Liza Ermolenko of Capital Economics  said in a note at the end of August.

"But although this supports our  view that growth is likely to pick up over the coming months after the  disappointing first half of the year, it is still too early to speak of a  recovery."

What is not clear is how strong the economic recovery will be, nor how fast that recovery will gather momentum. Russia’s critics are dismissive  of both the anti-corruption campaign and the Kremlin’s ability to push  through meaningful reform, so they forecast a lackadaisical performance.  But what the naysayers miss is that, uniquely in Europe, much of  Russia’s slowdown is a self-inflicted wound.

While other European countries have been forced to slash interest rates  to almost zero and push up their debt levels to unsustainable levels to  finance spend-to-grow policies, Russia has kept interest rates high, cut real spending for the first time in two decades and left its cash  mountain of reserves largely untouched.

Russia has forgone the policy of throwing money at the economy that  passes for a rescue strategy on the rest of the Continent and an option long since exhausted by most of Europe, because Russia’s financial policymakers believe it would only create bubbles or drive up inflation. The goal of this policy is not to boost growth, but improve the  long-term health of the economy.

Unlike any other European country, Russia’s $500 billion cash pile and massive borrowing capacity gives it unrivalled spending power, but perversely it is now that the authorities have chosen to introduce a “fiscal rule”, which in effect ties spending to historic oil prices and so sets revenue targets, rather than guessing what the price will be in the next year.

The upshot of this accounting change is that government spending has been cut in real terms for the first time in two decades, when previously it was growing by at least 20 percent a year since about 2000.

Likewise, while the rest of the central banks in Europe have been  forced to slash rates to next to nothing, the Central Bank of Russia (CBR) has flummoxed repeated predictions of a rate cut and kept interest rates high at 8.25 percent, being more concerned with bringing inflation down than boosting economic activity. Inflation is falling now and the CBR will probably start cutting rates from the September policy meeting, but  even then it is highly likely to cut in small 0.25-percentage-point  increments.

The CBR has turned a deaf ear to the shrieks of pain from oligarchs who complain about the high cost of borrowing and even rebuffed Putin’s calls to reduce interest rates. Indeed, the only practical policy it has adopted to boost growth is to allow the ruble to significantly weaken, which slid to its lowest level in four years against the dollar/euro  basket by the end of July.

“With over $500 billion in reserves the Russian authorities can put the currency wherever they want it,” says Tim Ash, chief strategist at Standard Bank. “I think the message from the CBR is quite clear now: they favour a weaker currency to try and kick start a pretty dire economy/outlook.”

How the rest of the year will play out is still not clear, but the Kremlin has the luxury of being able to turn on the spending spigot at anytime if things get too difficult.