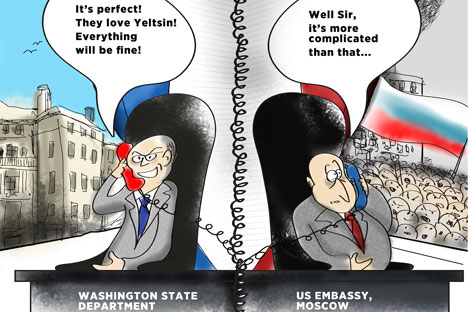 Wayne Merry, a retired diplomat who served at the U.S. Embassy in Moscow 20 years ago, recalls October 1993.

October 3, 1993, in Moscow was a beautiful autumn Sunday. It was also the day when domestic political debate collapsed into urban warfare.

The crisis dated at least from the previous November with the expiration of President Yeltsin’s emergency powers plus the determination of the national legislature to reassert its authority and to restrain the country’s dominating national leader.

The confrontation had nearly turned violent in the spring, but was averted into a national referendum and the drafting of a new constitution. This process bogged down in September.

Despite his considerable virtues, Boris Yeltsin lacked patience. He chose to cut the political Gordian Knot by proroguing the legislature. Whatever the merits of the competing sides, Yeltsin’s action was extra-constitutional and provoked what followed.

For the opposition leadership – Vice President Rutskoy and parliament chairman Khasbulatov – the conflict was about power and unhappiness with Yeltsin’s pro-Western policies.

The opposition also attracted many of the ugliest and most extreme elements in Russia, both from the Red left and the Brown right. One bit of graffiti from those days illustrates this point: “Death to the Jew Yeltsin!” The opposition leadership within the Russia White House exercised little effective control over the masses who rallied to oppose Yeltsin.

After ten days of standoff, Patriarch Alexy hosted mediation efforts which led many people to believe Sunday would be a day of peace. That expectation was shattered by riots literally below my kitchen window on October Square, where anti-Yeltsin protestors took events into their own hands.

This started the urban warfare which raged through the night and resulted on Monday in the tank and infantry battles across central Moscow which retook the White House, imprisoned the opposition leaders, and restored Yeltsin’s authority but not his legitimacy.

I was an official eyewitness both to the events themselves and to the outlook and role of the United States toward developments in Russia.

During the October 3-4 crisis itself, Washington’s attention was on the “Black Hawk Down” episode in Mogadishu. The loss of American lives in Somalia was a higher priority for policymakers than fighting in Moscow.

Throughout, the Clinton Administration perceived events in Russia in highly simplistic terms, despite efforts by the Embassy and Washington analysts to explain its complexities.  The Administration was committed to two things in its Russia policy:  Boris Yeltsin and the neo-liberal program of macro-economic reform known as the “Washington consensus”.

It was largely deaf to questions of legality and constitutional legitimacy. Along with most of the American media, the Russian crisis was portrayed in Washington as good guys versus bad guys, with Yeltsin preventing a return of Communist rule, which was never a serious threat.

The Clinton Administration interpreted the outcome of October 4 as a triumph both for Yeltsin and for the Treasury/IMF/World Bank program of economic “shock therapy.” They did not appreciate Yeltsin’s profound loss of political legitimacy nor the growing alienation of the Russian public caused by the economic austerity imposed by his Western-sponsored finance minister, Boris Fyodorov.

Washington assumed the December elections for a new constitution and new legislature would be an unalloyed victory for Yeltsin, his policies, and the “Washington consensus”. Repeated and detailed warnings from the Embassy to the contrary were ignored.

When the December elections proved an overwhelming popular rejection of the Yeltsin program – with the urban blue-collar proletariat giving neo-fascist Vladimir Zhirinovskiy almost a quarter of the total vote – Washington faced a choice.

View the timeline: Chronicles of the constitutional crisis

It could respond to the will of the Russian people expressed in the most open, free and fair elections the country has ever had or it could pursue the neo-liberal program through mechanisms inconsistent with Yeltsin’s own brand-new constitution. Washington encouraged Yeltsin and his team to the latter response.

Make no mistake: the path Russia took, both political and economic, was chosen by Russians, not by Americans. Washington advised and advocated policies for Russia, but Yeltsin and others could have taken a different course.

Nonetheless, Washington did actively take sides. It consistently preferred economic ideology to the development of participatory democracy and the rule of law. Thus, some of the blame for the era of the oligarchs and all that followed must attach to our policy, though Washington remains in denial on this point.

Doubtless, in twenty years Washington will be in denial about recent events in Cairo as well.

E. Wayne Merry was in charge of the analysis and reporting of Russian domestic political affairs at the U.S. Embassy in Moscow 1991-94.

u.s.-russia relations Russian history fall of the ussr Viral in Russia Fall of the USSR