Inside the BBC: The missing colors of broadcasting 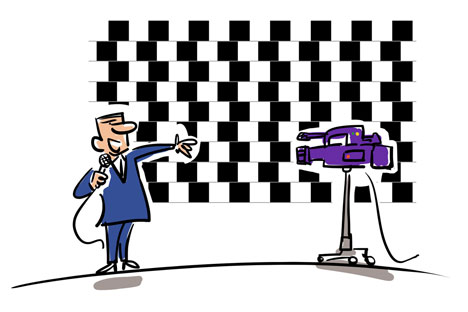 After a spate of scandals about UK press intrusion and sensationalism the debate about media freedom versus responsibility is raging on. Politicians have abandoned plans for a strict statutory regulation of the press agreeing on a Royal Charter, just as the papers demanded. The BBC has always been governed by a Royal Charter of its own but it does not appear to be a panacea to avoid mistakes, as Nikolai Gorshkov reminisces.

Click to enlarge the image. Drawing by Alexey Iorsch

My broadcasting career began 35 years ago at Moscow Radio international service. When Mikhail Gorbachev’s perestroika came I started freelancing for the BBC on the momentous changes in the Soviet Union. This landed me a job offer from the BBC Russian Service, which I looked at as a doorway into the “proper” BBC.

Little did I know about the “glass wall” between the World Service and the rest of the Beeb, or rather between language producers hired from abroad and native Brits. It took eight and a half years of perseverance to break though that glass wall and become a BBC News foreign correspondent. Back in 2001 it was a real first. Congratulations came from all quarters: the BBC seemed to be celebrating the fact that a non-native could make it to the top of its journalism.

Not really, judging by an article in The Times, which claimed that many in the BBC thought I could not be trusted to present an impartial picture of Russian politics and life because of my “background”. A debate ensued in a BBC staff magazine about the pros and cons of having a foreigner covering foreign stories. Opinions split almost exactly along the “glass wall” divide: World Service editors and journalists believed that somebody intimately familiar with the mentality and way of life in a foreign land was better placed to explain that country to British and global audiences, while those on the “home” BBC side argued that any foreign reporting for the British public should be done through British eyes.

The latter notion manifested itself in the so-called “parachuted-in” reporting, when a few “star” reporters and presenters would be sent to cover a major foreign story with very little time to understand the intricacies of the situation. The result quite often would be more style than substance, with the British viewers getting what BBC editors called a “simplified version of the truth”.

This quest for simplification led to some funny blunders. A veteran BBC correspondent sent to cover the NATO bombing of Yugoslavia in 1999 observed from his hotel window in central Belgrade the completely deserted streets and concluded that the locals were scared to leave the safety of their homes, bracing themselves for the strikes. Colleagues at the Serbian Service in Bush House ridiculed this observation, knowing well from friends and family on the ground that many locals were actually out on the bridges across the Danube to create human shield against NATO bombers. There were no cars on the streets because the Yugoslav army had impounded petrol for its own needs.

Quite a few BBC journalists kept referring to the Russian invasion of Chechnya, as if Chechnya was a separate state and not Russian territory. I always wondered what BBC editorial bosses would say if their journalists referred to the troubles in Northern Ireland as a British invasion.  I did raise this issue at a BBC Editorial Board, which discussed the pitfalls of covering the war in Chechnya. The BBC got itself into a pickle by hastily denouncing Russian troops for a war crime they did not commit. The accusation was based on a video tape, which had changed several hands before being acquired by the BBC. After the BBC broadcast, the original maker of the tape came forward saying that what he filmed had nothing to do with the alleged crime.

Such “over-excited” reporting, as the former Head of News Helen Boaden admitted recently in a BBC Trust report on coverage of the “Arab Spring”, can only lead to more blunders like the one in Chechnya. In May 2012 the BBC attributed a 2003 picture of dead Iraqis to the Houla massacre in Syria. Photographer Marco di Lauro who took the picture wrote in his blog that “somebody is using my images as propaganda against the Syrian government”. The BBC said efforts had been made to track down the original source resulting in some information pointing to the veracity of the photo. Yet as an internet user under the nickname ty_a posted on antiwar.com, it took him 30 seconds to figure out through Google Image search that the photo dated back to 2003.

When I became BBC News correspondent in 2001, about 8 per cent of the UK population were foreign born. Yet they were hardly represented among staff of the “home” BBC services and had difficulty identifying themselves with the public service they were paying for. They could not connect with the simplified coverage of the world shown on domestic TV channels, while international staff in World Service were frustrated by not being able to share their insight about the outside world with UK audiences.

For example, a Panorama documentary “Euro 2012: Stadiums of Hate” created quite a stir among BBC Ukrainian staff with allegations of widespread racism among Polish and Ukrainian football fans. They were upset that BBC reporters grossly exaggerated the reality on the ground by selecting worst cases and presenting them in isolation.

The latest official statistics show that 12.4 per cent of the UK population are foreign born. These eight million newcomers have better knowledge and understanding of things back in their countries of origin than your typical British born and bred journalist.

The biggest push for a change in BBC’s attitude to its diverse audiences appears to have come from Her Majesty’s Government when it decided three years ago to transfer World Service funding from the Foreign Office to the licence fee. It was decried by many in the ”home” BBC as reaching into the licence fee payers’ pockets to fund a service of no value to them.

What was lost on these critics was the fact that the newcomers to these shores also pay the licence fee, thus providing Auntie with 13% of its income. And they rightly expect to be catered for by the public service broadcaster. The coming together of BBC Home and World services under one roof at New Broadcasting House has allowed the introduction of a Global News Room, tapping into the wealth of country and issue-specific expertise of vernacular journalists. This integration is not without its sceptics but at least there is a promise of providing a fuller, more complex picture of foreign events instead of the “simplified truth” I battled with during my time at the BBC.

Nikolai Gorshkov is a freelance writer based in London. He served as a BBC correspondent and representative in Russia and the former Soviet Union from 2001-2012, including a term as the head of the BBC office in Ukraine.