Thaw between Moscow and Tbilisi to benefit everyone 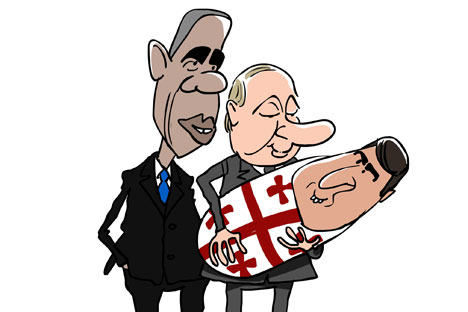 There is obvious demand for a normalization of the Tbilisi-Moscow relations. Even a limited thaw would open up opportunities for establishing control over the tumultuous North Caucasus region.

Georgia elected its new president on October 27, ending 10 years of Michael Saakashvili's reign. The past decade was the lowest point in the Russian-Georgian relations since the U.S.S.R's disintegration.

This was the period when Tbilisi severed diplomatic ties with Moscow; it was when the two countries got embroiled in an open five-day military confrontation. Moscow's recognition of the independence of Abkhazia and South Ossetia became the first precedent since 1991 that the border between two neighboring former Soviet republics got revised.

Many view the end of the Saakashvili period as an essential precursor to a thaw in the relations between Moscow and Tbilisi. All the more so, as the leaders of the Georgian Dream coalition, which has now come to power in Georgia, are intent on "decreasing [the] temperature [in the relations] with Russia."

This objective was proclaimed by the country's newly elected President Girgi Margvelashvili in one of his campaign speeches. Will such a thaw serve the interests of Russia and Georgia, of the two countries' neighbors, and of outside players such as the United States and the European Union?

Georgia's significance to Eurasian geopolitics is extremely high. The country acts as the intermediary between the Black Sea and Caspian regions. It is no accident that, in the times of the Russian Empire, the residence of the Caucasus governor was located in Tbilisi.

The Russian-Georgian border skirts the politically turbulent territories of Chechnya, Dagestan, and Ingushetia. Georgia lies between Russia and Armenia, Moscow's strategic ally in the Caucasus. To Armenia, the Georgian border is one of the primary gateways to the outside world.

Georgia's other neighbor in the region, Azerbaijan, is working with Tbilisi on a number of strategic energy and transportation projects (the Baku-Tbilisi-Ceyhan oil pipeline, Baku-Tbilisi-Erzurum gas pipeline, and the Baku-Akhalkalaki-Tbilisi-Kars railway line, which is currently under construction). Georgia, which controls the ports of Batumi and Poti, serves as a gateway to Turkey, and from there on to the Middle East and the EU.

There is obvious demand for a normalization of the Tbilisi-Moscow relations. First, even a limited thaw would open up opportunities for establishing control over the tumultuous North Caucasus frontier. Let's not forget that for the self-proclaimed Caucasus Emirate, Georgia – just like Russia – is a strategic adversary.

Georgia recognizes wrong steps and dramatic mistakes made 5 years ago

Once again, Russia and Georgia try to find common ground

The leaders of the North Caucasus underground realize that their so-called emir, Doku Umarov, is on the U.S. Department of State's blacklist. In fact, particularly in the aftermath of the Boston terrorist act, Washington is now extremely interested in stabilization in Russia's Caucasus.

Despite all its disagreements with Moscow, Washington recognizes the North Caucasus as Russia's integral part and is prepared for cooperation in this particular field. It is no accident then that during his recent visit to Washington, Georgian Defense Minister Irakli Alasania expressed his readiness to strengthen defense and security with Moscow, "despite the bitter legacy of the 2008 conflict."

Second, an improvement between Russia and Georgia suits the U.S. interests. Although Washington is not happy with Russia's domination over post-Soviet territories, it would prefer to avoid any head-on confrontations and advocates a pragmatic approach to the existing discords (not a dispute of values but a dispute of interests).

The stepping down of Georgia's eccentric third president fully meets this goal. Washington would be happy if Tbilisi stayed on its current course towards integration with NATO and closer ties with the EU, while simultaneously overcoming its open hostility to Moscow.

Third, normalization would be of interest to other Caucasus nations. It would allow Armenia to get greater freedom of maneuver in implementing its foreign policy. Azerbaijan, an active partner of Tbilisi, would no longer feel hostage to Georgia's maverick policy, which has up to now pushed Baku towards confrontation Moscow. Azeri diplomacy has never been comfortable with an either-or geopolitical choice between Russia and the West.

Therefore, normalization would benefit each potential parties, their immediate neighbors, and outside players. There is however no reason for excessive optimism. Indeed, Saakashvili played a key part in the worsening of the bilateral relations, but many other factors had been present before his time, while others (including the problem of Abkhazia's and South Ossetia's self-determination) are systemic by nature.

Nevertheless, moving from ideologically loaded politics to greater pragmatism and the recognition of the parties' right to "agree to disagree" would be a very important step forward.

Sergey Markedonov is a Russian political analyst. Since May 2010 he has worked as a visiting fellow at the Washington, D.C.-based Center for Strategic and International Studies.