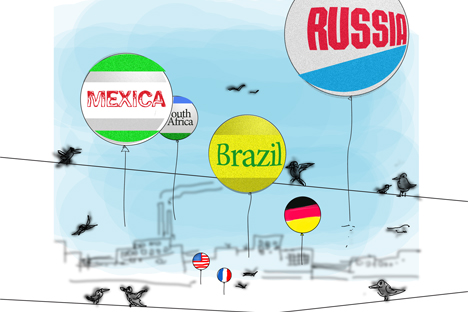 Russia has long been an active player on the international debt market – and in fact has strengthened its position since the crisis of 2008.

Rising demand from a widening range of international investors, outstripping supply many times over, has spurred a growing volume of placements by Russian companies.

Many issuers have proven themselves reliable borrowers, allowing them to make placements without special road shows.

So why are Russian Eurobonds attractive for foreign investors?

Treasury bonds, and you’ll find they offer yields of about 4.3 percent and 2.5 percent respectively. This makes the returns from Russian debt almost 1.7 times higher than from U.S. bonds.

Against the background of the individual BRICS countries – the large emerging economies of Brazil, Russia, India, China and South Africa – Russia also looks advantageous, although the degree of profitability is more comparable.

In terms of yields, Russian bonds still trade at a premium to similar bonds of the BRICS countries that, in my opinion, is not warranted. Therefore there is, in my view, potential for growth, both in sovereign Eurobonds and in corporate ones.

Take a look at the national debt. The ratio of Russia’s government debt to its GDP is about 11 percent. For comparison, Mexico, Brazil and South Africa have figures of between 35 percent and 38 percent.

Developed countries, such as the U.S., Germany and France, have debt-to-GDP ratios of 107 percent, 57 percent and 84 percent respectively.

Russian economic growth will be leaner than predicted

Developing the domestic market through the Moscow Exchange

This allows Russia to be more agile, and leaves a margin of safety in the event of a crisis in the global economy. It also has the world’s fourth-largest gold reserves, amounting to $520 billion. During the crisis of 2008, this helped Russia to cope with its financial and social obligations.

The main risk, however – which is not related specifically to Russia – is an increase in dollar interest rates. The United States is, of course, the main news-maker here.

Federal Reserve policy and other U.S. issues may result in sharp fluctuations, not only in the U.S. debt market, but, as a consequence, in the dynamics of the Russian Eurobond market.

Pavel Vasiliadi is director of the analytics and risk-management department at the UFS Investment Company.