Why the Kremlin released Khodorkovsky 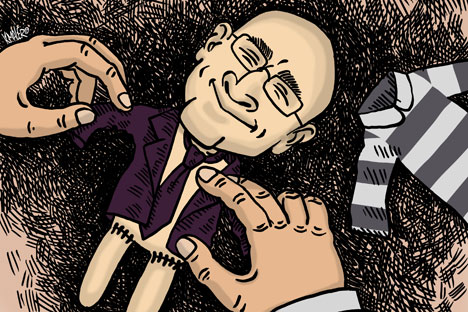 There are many reasons for the release of Khodorkovsky after 10 years in a Russian prison, some of them known and many that are unknown.

The story of Mikhail Khodorkovsky's release from prison is so full of mysteries and almost mystical coincidences that one can only regret that Tom Clancy is no longer with us. He would have turned it into a gripping thriller, replete not only with some intricate plot twists but also with various romantic notions. Real life, however, is much simpler.

Alas, contrary to views voiced by ecstatic optimists, Khodorkovsky's release did not become "a victory of the Russian human rights movement." Although many human rights activists and major industrialists had more than once called for his release, it was done not for their benefit. His release is a deal with the West.

Khodorkovsky not planning a return to politics

This deal may have several points. The most obvious one is an attempt to improve the country's image ahead of the Olympics.

From the outside, Khodorkovsky's release, which reminded many of Solzhenitsyn's deportation in February 1974 (albeit not via Berlin but via Frankfurt), looked like a spy swap operation. Furthermore, taking place on a day that is marked in Russia as the security services' professional holiday. Interestingly, it may well turn out to be exactly that. And this may be the root of the "German trail" in the Khodorkovsky release story, which has left everybody wondering.

Few people remember that in the summer of 2013 a court in Stuttgart convicted two Germans (or maybe they were not Germans) of espionage for supplying secret information to Russia for 20 years. They featured in the trial under the names of Andreas and Heidrun Anschlag.

Theirs must have been top-class work, which provided Moscow with secret information on the NATO operation in Afghanistan, the deployment of a missile defense system in Eastern Europe, German-U.S. relations and so on. They were exposed in October 2011 by the F.B.I., which had learned of a network of Russian undercover agents from defector Aleksandr Poteyev.

Back then their lawyer Horst-Dieter Pötschke admitted that talks about a swap were under way and it would “take place any minute."

Ombudsman: Khodorkovsky pardon unlikely to have much effect on Russian business

According to some reports, the issue was raised at a personal meeting between Angela Merkel and Vladimir Putin, although both sides' representatives denied it. Let's wait and see where the Anschlag couple will resurface soon. If we are ever see it, that is.

Another possible "exchange" is suggested by a decision taken by the Obama administration last Friday. It had been expected to come a week earlier but was for some reason delayed. The decision concerns "the Magnitsky list."

According to reports from Congress, a week ago the list was expected to be expanded to include some 20 more names, including high-ranking law-enforcement officials. Sensationally (for the Congress), that never happened.

Of course, Khodorkovsky could not have been the reason, at least the only reason, for that. Moscow and Washington are now establishing a delicate dialogue in a number of areas, including Syria and Iran. So this is not the right time for "throwing stones." It was just a coincidence.

And yet another coincidence: Henry Kissinger's visit to Moscow at the end of October, when he had a meeting with Putin and with the head of the Kremlin administration, Sergey Ivanov. What they talked about was never made public.

But Kissinger is not the oddball basketball star Dennis Rodman, whose visits to the North Korean leader are becoming increasingly more frequent. He performs the most sensitive requests of the U.S. leadership.

Opinions: What does Khodorkovsky’s release mean

In addition, he represents a powerful consulting firm, Kissinger Associates (linked, among others, to JP Morgan and Goldman Sachs), which forms part of the so-called "world government."

It is also called "the Masonic Lodge" of the global financial system, which – among other things – is interested in oil and gas projects. They say that without its formal "agreement," many major international deals are never signed.

On November 12, Khodorkovsky was persuaded to write a petition for pardon. A little later Rosneft and ExxonMobil signed yet another set of important agreements on oil production involving the use of modern U.S. technologies. Just another coincidence.

All these coincidences indicate at least one thing: there remain between Moscow and the West some high-level confidential channels of interaction, which prevent our relations from slipping into unbridled hostile hysteria. And thank God for that.

So, what is there for Khodorkovsky to do now? He may be bound by some obligations. That was the impression left after his news conference in Berlin. If that is indeed so, he will abide by them. Putin, when releasing him, was sure of that.

More: Khodorkovsky speaks out in Berlin

Are there any obligations as regards to not filing a new lawsuit against Rosneft, which has "inherited" Yukos's assets, not seeking to have its accounts arrested, etc.? Probably. (Khodorkovsky must have said as much in his letter to Putin sent together with the petition for pardon).

In other words, Khodorkovsky does not present any danger, not only from the political nor from the legal point of view either.

Getting released after 10 years in prison is a shock to the system that Khodorkovsky still needs to recover from. He spent as much time behind bars as he had been a rich man. Perhaps act three of his life's drama will consist of leading an ordinary private life for oneself and one's family. That would be the most understandable continuation of this saga.