Nuclear weapons are the only guarantor of security 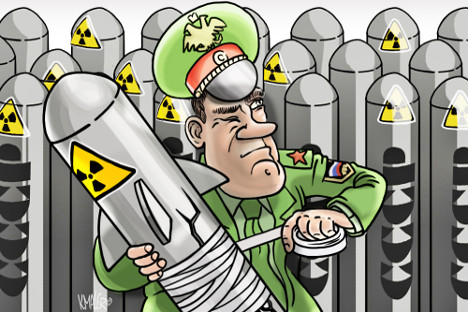 Russia's military doctrine highlights the significance of nuclear weapons for the defense of the country, but many argue that their role is steadily declining. Strategic nuclear forces, however, have been and remain Russia's only guarantee of security.

Should conventional weapons be deployed and enhanced? What is a greater priority, the Mistral amphibious assault ship or returning to medium-range missiles such as the Pioneer? Judging from the statements of Russian officials and publications of military experts, the nuclear factor is being fundamentally underestimated.

For some reason, many people forget that nuclear deterrence is not a hypothetical countermeasure to some threat, but a real method of avoiding war. No one in their right mind would want to provoke or discriminate against a country capable of responding in a way guaranteed to obliterate the aggressor.

It is no coincidence the U.S. is minimizing Russia's nuclear potential step-by-step (and at the same time its semblance of a fair partnership), making a first disarming strike easier.

Russia has been emulating the military organization of the United States lately by attempting to develop cyber command, unmanned aircraft, acquiring imported ships, and so on. However, attempting to play by American rules on their field is doomed to fail.

First, Russia has different economic, scientific, and technological resources, and secondly, the systemic role of the U.S. army is completely different.

The American army is constantly engaged in actual military operations around the world, which requires modern conventional weapons, including attack aircraft, strike drones, and cyber systems.

The Russian armed forces have no vital need for these types of weapons. Of course, it would be nice if Russian soldiers had nanomaterial suits, but 500 nuclear Pioneer missiles would prevent them from being sent to war in the first place.

In the meantime, we see plans adopted under President Medvedev for re-equipping by 2020. For example, 4.5 trillion rubles (over $137 billion) is earmarked for modernizing the navy. For that amount the Pioneer missile could be brought back into production with a range of five to six thousand kilometers and could be produced in such quantities that it would provide effective regional deterrence against a whole range of possible external threats to continental Russia - from NATO to Japan.

Purchasing Mistrals would let Japan know that its claim to the Kuril Islands cannot go beyond the level of diplomatic rhetoric. Ultramodern amphibious assault ships can scare a potential aggressor, of course, but not as much as medium-range missiles.

It would be enough to announce that the hostilities will immediately provoke a strike from deep inside the national territory on a minimally populated area of the aggressor that has been specified in advance. Would the aggressor be willing to test the efficiency of its missile defense by not evacuating residents of the target area?

This tough stance would first cause universal outrage and anti-Russian hysteria, but the Far East it would be more securely protected by missiles than all of the Pacific Fleet. It would give similar security guarantees in all directions - south, west, and north.

However, Russian authorities have no plans to fully restore the strategic nuclear forces. Not only because of international treaties, but also because, apparently, there is no foreign currency income to be counted on from exporting nuclear arms.

Fifth-generation fighters are intended to win air supremacy, but it's not clear on whose territory. In fact, not a single Soviet jet fighter ever fought to defend Soviet airspace. The same applies to tanks, ships, and guns, if you don't count localized conflicts abroad. The war experience of entire generations of military equipment has been only on paper.

The Soviet Union's strategic nuclear forces (SNF) provided it real stability and peace. Russia should not throw away the experience of Soviet predecessors and limit the potential of its greatest means of defense.

Although nuclear forces in the post-Soviet period have suffered considerable damage, they are still comparable with the previous level, remaining second in the world and far ahead of third place.

If Russia's defense were optimized by strengthening the role of nuclear weapons in ensuring global and regional deterrence of potential aggression against Russia, 20 trillion rubles ($612.4 billion) would hardly be needed for tanks and fighter planes.

And if this money is in the treasury, or will be, when Russia's military is reorganized giving priority to nuclear weapons, it can be partially redirected towards social needs. All this is possible if Russia clearly and definitely makes a choice based on its natural historical advantages.

Conventional armed forces, of course, are also needed, but they are secondary. Russian's nuclear factor has always maintained global peace, so if its power is restored, a stable future would be assured.

Sergei Brezkun is a professor of the Academy of Military Sciences.