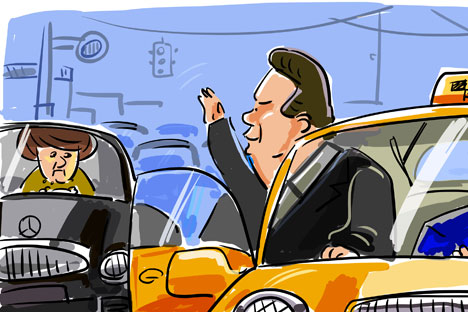 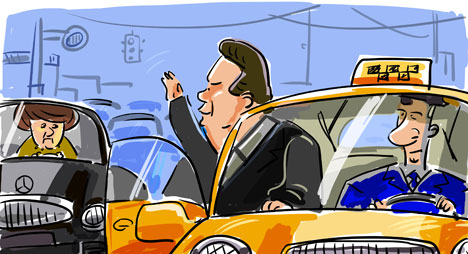 Ukrainian President Viktor Yanukovich set off a fresh crisis in his country in fall 2013, when he rejected a trade deal offered by the European Union in favor of closer ties with Russia.

Thousands of Ukrainian citizens took to the streets in protest, and clashes with riot police resulted in injuries.

What are we to make of these events?

Understanding the choice before Ukraine and the motives of Yanukovich and Russian President Vladimir Putin requires a nuanced appreciation of the economic history of the post-Soviet landscape.

Opinion: What's behind the protests in Ukraine

The break-up of a single economy that resulted from the collapse of the USSR had harsh economic consequences that are still playing out in the region.

In the 1990s, Russia’s economy contracted 40 percent, and Ukraine’s economy fell as much as 60 percent. The Soviet economic system was destroyed, and new types of co-operation between countries are only just beginning to emerge. This is by no means an easy process.

In the Soviet era, Ukraine was the most economically and technologically advanced republic in the USSR. But as a sovereign state today, Ukraine is one of Europe’s poorest countries.

The EU and the U.S. began to compete with Russia for influence over Kiev soon after the breakup of the Soviet Union. But their actions lack strategic vision and are currently not backed by economic resources.

Not so long ago, Ukraine was the third largest recipient of U.S. aid, after Israel and Egypt. The EU too has implemented numerous reform assistance programs for Ukraine.

But the scale of that support was far from meeting Ukraine’s needs. The 2008 crisis had a devastating effect on its economy.

There were also difficult social consequences, showing the country’s leadership that the path of ultraliberal reforms would be dangerous for social stability. It was at that period of uncertainty that Russia joined in the politico-economic rivalry over Ukraine.

When inviting Kiev to sign an association agreement in November 2013, the European Union in effect agreed that the task of improving Ukraine’s situation lay fully on the Ukrainian authorities and people. The EU, after all, had its own financial and economic crisis to deal with first.

Kiev had expected Brussels to come up with a modern version of the Marshall Plan, and those expectations were dashed. In effect, Ukraine was being invited to join a Eurocentric model as one of its periphery states.

By contrast, Russian leaders believe that becoming “a second-rate European country” is not what Ukraine deserves. The Kremlin is offering Ukraine a more attractive short-term development path as a partner in the Moscow-led integration bloc called the Eurasian Union.

The aid package that Russia offered to Ukraine in December 2013 (a $15 billion loan; a considerable price cut on Russian gas; joint technological projects) prevented a default and provided some breathing room to develop plans for saving the Ukrainian economy.

Champions of integration within the Eurasian Union say one should not overestimate the destructive consequences of the collapse of the unified Soviet economy.

Much of the shared Soviet legacy has indeed been preserved. For instance, Russia and Ukraine still have massive trade in goods and services ($55.5 billion in 2012), visa-free travel and free movement of labor, an integrated gas transportation and power system and military-industrial cooperation.

Russia still has its naval base in the Crimea, Ukraine. In political economics, relations like these are termed “interdependence” and they are an important condition for economic integration.

But it is doubtful whether the model proposed by Russia will remain sustainable in the long term. Experts are well aware that the effective functioning of a modern state depends on such institutions as strong property rights and market sophistication.

Russians aware of loan to Ukraine, say it can preserve friendship - poll

A divided Ukraine: Between Russia and the EU

Property rights protection in Russia is poor, institutions of the required quality have not yet been created and the country’s authorities are not doing anything to create them. What the Russian economy needs is not micromanagement from the Kremlin, but reforms that could ensure the operation of the economic institutions of a modern state.

If Russia’s next move after involving Ukraine in a process of reintegration is to carry out the kinds of radical institutional reforms that economists have been urging for the past 10 years, then the protests in Kiev’s Independence Square and the unexpected rapprochement between Russia and Ukraine could have long-term positive consequences for both countries.

Russia and Ukraine are united in that their future prosperity lies in developing European-type democratic societies. Yet Russia also aspires to become an independent center of gravity in world politics. Its current efforts are aimed at attracting Ukraine into its own integration project, which runs counter to the interests of the EU and the U.S.

The need to deepen cooperation with Ukraine within an integration project will hopefully spur reforms both in Russia and Ukraine, leading to the creation of a window of opportunity for a real modernization of the politico-economic system in both countries.

But in the meantime, Russia is unlikely to adopt a policy that reconciles itself to passively watching Ukraine develop as a peripheral member of the European Union.

Leaders of the countries that once constituted the Soviet Union share certain similarities in their worldview. One is that they tend to downplay the concept of ”values” as a motivating factor for national policy, preferring instead to focus on “interests,” both national and personal. 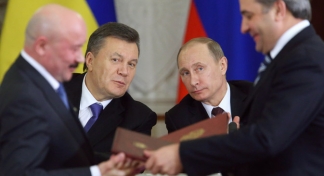 Russian leaders are convinced that international relations within the Commonwealth of Independent States (as the loose-knit organization of former Soviet states is known) is a zero-sum game territory. That means every defeat suffered by a partner from outside the region translates into a victory for Russia. Such outsiders would include the U.S. and China, as well as the EU.

Any attempt to understand the economic consequences of the current events around Ukraine without taking into account this worldview of the regional elites is bound to fail.