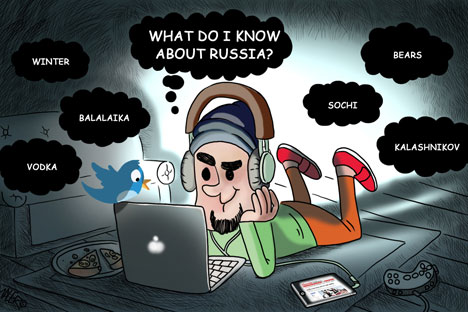 Chris Fleming weighs in on #sochihaiku and the power of media reporting in shaping opinions ahead of Sochi 2014.

Buzzfeed, that darling of Internet trending, recently featured a page in response to a Russia Beyond the Headlines request for RBTH social media followers to write a haiku about the Sochi Games, with the promise that the best would get published on a special RBTH blog.

Apart from generating a lot of bad verse, what exactly did those designing the competition expect would happen? Let us just say that expecting that every haiku posted or Tweeted would be a glowing endorsement of Sochi or Russia would have been about as realistic as hopes to one day design a waterproof teabag.

No one expected that. Yet Buzzfeed seemed to think that the animus directed at Putin and the IOC for choosing Russia constituted some kind of mass scandal.

“Welcome to Sochi / Let’s hope nothing starts to fall / Except for Putin” reads the leading haiku in Buzzfeed’s story; “The games in #Sochi / Isn’t about winning / It’s about spending” reads the next.

Whatever one thinks of these poems, it’s not particularly scary stuff. Indeed, what we see in such posts are standard expressions of criticism – both of a national leader and the supposedly rampant commercialism of the modern Games.

I was in Canada at the time of the 2010 Winter Games, and there were issues raging at the time about the ostensibly Machiavellian decisions of local governments in forcibly relocating homeless people away from event sites. The mere fact of criticism can hardly constitute a “PR disaster;” if it does, then every edition of the Olympic and Winter Olympic Games has been a PR disaster.

The Sydney Games were preceded with protests and critical media attention, especially around the Homebush Bay area, about environmental toxins produced by the construction of Games facilities, as well as about the role and representations of indigenous culture in the games.

In China, human rights and air pollution were under very close scrutiny; and in Greece, government corruption and the supposed sloth and disorganisation of building contractors took pride of place.

How do they frame the issue? The Buzzfeed page points out that RBTH is produced by Rossikaya Gazeta, “the Russian government’s paper of record.” What seems to be implied here is that RBTH – on the basis of being part of a state-owned media company – is simply incapable of tolerating dissenting views.

If we are to follow a certain crazy logic, we wind up imaging a very strange scenario: A brilliantly devious, state-controlled media company, experts in manipulation, create a competition that ends up hoisting itself on its own petard.

But if this is the case, we then have to consider something additional. Given the actual outcome of the initiative, we are forced to entertain the prospect that that very same media company is either not as “brilliantly devious” as we might have been first led to believe – or not in the game of crushing all dissent quite as ruthlessly as we may have expected.

Perhaps it’s really not that strange. The fact that RBTH initiated an “open competition” tends to count against a view of it as some monolithic piece of spin production. As for being an “epic PR fail,” that’s somewhat harder to say.

But what is often missed is that sites like Buzzfeed don’t seem to understand that what they are doing is creating a media climate of opinion, not merely reflecting on it. The haiku competition may not be a “fail,” but certain websites may be in a hurry to make it one. Whether they succeed or not remains to be seen. Perhaps, ultimately, they will have their wish.

Yet, by itself, surely the idea that a public relations project can be derailed by a series of poems requires a belief in the power of poetry that not even the most idealistic of literature professors would be prepared to endorse – even in their drunkest moments…

Dr. Chris Fleming is a senior lecturer in Humanities and Communication Arts at the University of Western Sydney.