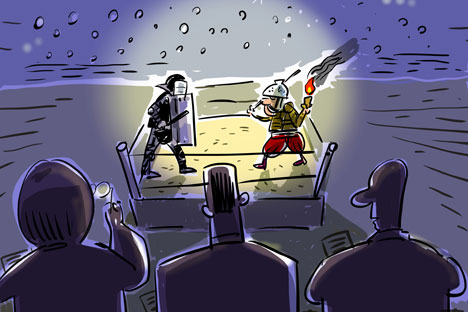 The current violence in Kiev is more reminiscent of Moscow in October 1993 than the Orange Revolution. 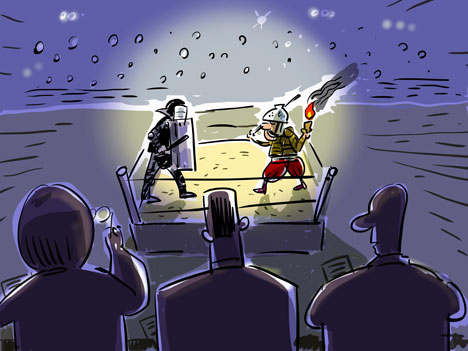 Ukraine has crossed the line. The tension in the country, which has been increasing since the fall, has resulted in a kind of failed coup, such as the one that happened in Russia in 1993. Until recently, this seemed impossible in Ukraine, with its different political culture.

However, not only is it possible, it is worse. In Russia, October 1993 was the tragic end of a struggle for power, and it put an end to any questions about the direction in which the country was headed. This is not the case in Ukraine. Not only is no clear end in sight, on the contrary, the fate of the state itself is in question now.

Since the very emergence of the “Euromaidan,” many people have drawn parallels between the current situation and the Orange Revolution of 2005. However, the essence of the conflict is quite different today. 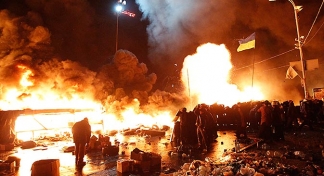 Ten years ago, despite all the chaos and drama of the presidential elections and the things that followed, the debate was primarily about updating the country’s economic and governmental structure. That is, the conflict was about the future. Today, no one is thinking about the future.

The sides in the heated confrontation taking place in Kiev have no strategic goals, and have not from the beginning. President Viktor Yanukovich and his team are concerned only with holding onto power. The opponents of the ruling conglomerate are eager to seize it, but it seems they have not thought even for a moment what they will do afterwards.

Both sides are counting on the support of an external patron. Russia’s support is critical for Yanukovych, since it is the only source for plugging budget holes and guaranteeing the country’s economic survival.

The opposition members, for their part, have set their hopes upon the West, and expected the West to formulate the tactics and strategy for them. They cannot do it themselves.

But Ukraine’s problems have an internal nature. The country has not taken the past 20 years of independence to determine its purpose and create structures that will help it develop as a unified state.

Number of casualties of Kiev disturbances up to 28 people

Undoubtedly this is a difficult task, considering the socio-economic and mental heterogeneity of the country. But this failure to construct viable state institutions has led to Ukraine becoming a country where informal networks – rather than the state – are the primary political force.

The topics discussed in Ukrainian politics in 2014 are the same as those discussed in 1992. That is all the progress that has been made in more than two decades.

The experience of the Orange Revolution showed how the West ignored many of the specifics of Ukraine, instead following their ideological inclinations and focusing on the role of civil society.

Certainly appealing directly to the public helps catalyze the necessary processes for political development, but it does not guarantee the desired outcome, since a functioning state is required to form these processes into a political reality. In Ukraine, however, state institutions have not crystallized into a decision-making structure.

This situation right now is very dangerous. The institutional collapse in Ukraine increases the likelihood that external players will get involved. Germany, for example, has a desire to show its newly acquired taste for European leadership; there is also the inclination by the United States to check an increasingly assertive Russia along with Moscow’s desire to prove its pre-emptive right to dominate the post-Soviet space.

Taking into account the value of the potential trophy, and the probable costs, it is difficult to imagine anything more unnecessary than a struggle for Ukraine.

The ideal scenario would be if Russia and the EU could agree on an informal protectorate that would guarantee the preservation of Ukraine within its present borders and take on some of the responsibilities that the current state institutions seem unable to manage. 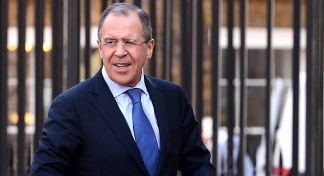 Unfortunately, another scenario is more likely: Russia and the West will accuse each other of aggravating the situation in Ukraine and will start doing battle by proxy, supporting the opposing sides and deepening the split between them.

In 2008, when the issue of granting Ukraine and Georgia a Membership Action Plan in NATO was raised on the initiative of the George W. Bush administration, Russian President Vladimir Putin, in a leaked conversation from the NATO-Russia summit, pointed out the artificiality of Ukraine’s borders and urged the West not to aggravate the situation so as not to provoke an internal conflict.

The West considered this as a threat back then. The current conflict shows that no one in the West really realized the seriousness of the divisions within Ukraine.

Geopolitical reflexes combined with ideological patterns have now led to a major crisis, the ripples from which can reach very far indeed.

Fyodor Lukyanov is Chairman of the Council for Foreign and Defense Policies and Editor in Chief of the journal Russia in Global Affairs.