Putin places his bids in game of Ukrainian roulette 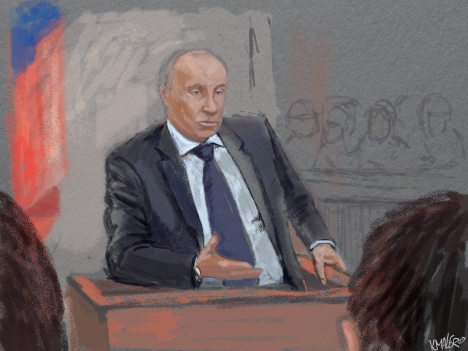 While talking to the press, the Russian president appeared absolutely convinced that he has acted in a just manner, and showed that he was ready to continue his current strategy regarding Ukraine.

On March 5, Russian President Vladimir Putin met with the press for the first time since the political crisis in Ukraine began. The president appeared completely calm, absolutely convinced he has acted justly, and ready to continue his current strategy regarding Ukraine.

At least this was the tone of Putin’s statements, which were intended to cool hot heads – particularly in the Western capitals, where there has been talk of sanctions against Russia – and the financial markets, where a mass sell-off of Russian securities took place on Monday.

However, in speaking about the future of Ukraine, at least some of Putin’s words had the opposite effect. Putin seemed to imply that Russia is not inclined to recognize the territorial integrity of Ukraine.

“When we point out that it is an unconstitutional coup (in Ukraine), we are told that no, it's not an armed seizure of power, it is a revolution. So if it is a revolution, then it is difficult for me to disagree with some of our experts, who say that a new state has appeared on this territory,” Interfax quoted Putin as saying. “And we have not signed any binding documents either with this state or regarding this state,” Putin said.

Putin sees no needs for military action in Ukraine

He drew an analogy with the events of 1917 in Russia, when the Russian empire broke up due to the revolution, and a new state was formed.

These last comments were in reference to the 1994 Budapest Memorandum, in which Russia, the United States and the UK pledged to respect the territorial integrity of Ukraine in the event that Ukraine gave up their Soviet-era nuclear weapons and remained a non-nuclear state – but the document was not ratified by Moscow, London or Washington.

Putin’s statements can be seen not only as a willingness to recognize the independence of Crimea, which will most likely be voted on by the peninsula's inhabitants in a March 30 referendum, but also as a willingness to recognize similar referendums in other regions of eastern Ukraine – and he made a point of showing the West that such a course of action is not unprecedented.

When asked if Russia is considering annexing Crimea, Putin said, “No, it is not being considered. And I believe that only the citizens who live in a territory can and must determine their own future when they are free to express their intentions and safe. And if the Kosovars, Kosovo Albanians were allowed to do this, if it was allowed in many parts of the world, then the right of a people to self-determination is enshrined, as far as I know, in the relevant UN documents, and no one has abolished it.”

The fact that Putin gave such involved answers suggests that he is ready for an international discussion on the most painful problem of the Ukrainian crisis - if the eastern regions bordering Russia will break away from Ukraine.

Given that Putin made it clear at the press conference that he is not planning to go to war with Ukraine (although he has not fully ruled out using force to protect the Russian-speaking population), this is the now the most crucial aspect of the crisis.

Putin seems to be saying that regarding these regions, all options are on the table.

Judging by reports in the Western media, the topic of territorial integrity has already popped up in telephone conversations between the Russian and U.S. presidents.

However, the Kremlin's press service has not mentioned it. Regarding his consultations with Western leaders on Ukraine, Putin said only, “Our conversations are confidential, and some of them are even made over closed channels. So I do not feel I have a right to reveal about what and how I discussed with my partners.”

Closed channels, it seems, are those that go around foreign affairs ministries and state departments and allow leaders to solve critical issues quickly and without intermediaries. This is what happened, for example, during the Cuban missile crisis.

Andrei Ilyashenko is a political analyst.