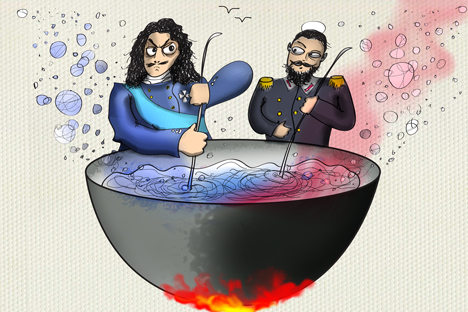 Russia would not have achieved the status of empire had hundreds of thousands of Europeans not poured into the country. Europe's elite came en masse: scientists, officials, musicians and engineers.

Over the three hundred years of its reign, the Romanov dynasty transformed Russia from a medieval backwater into a European power. At the beginning of the 17th century, Russia was more Asian than European.

This was hardly a surprise: Ever since falling under the Mongol occupation and influence in the 13th century, the country had clearly gravitated toward the east. But the Romanovs left behind a European country with a European system of values.

Although Tsar Alexei Mikhailovich began the process, it was his son, Peter the Great, who first opened the “window to Europe”. But the converse was no less important - that Europe gained access to Russia.

Our country would not have achieved the status of empire had hundreds of thousands of Europeans not poured into the country. Europe’s elite came en masse: scientists, officials, musicians and engineers.

I’m going to say something subversive: A Russian nation has never really existed in Russia. Those who came and worked for the benefit of the country, and adopted Russian values – they were Russian.

This is a very important point. Russia is fundamentally different from all Western countries, with the exception of the United States, of course. It’s possible to speak of a multinational empire, but it would be more correct to use the words “multicultural” or “multi-ethnic”.

It’s a pure melting pot, and the melting pot is also the basis of American society. Nonetheless, the melting pot came earlier in Russia. It was the continuation of a tradition founded by the Romans, who created their empire along the same lines.

In America it was much easier to create a multiethnic society, as it was a no man’s land. In such an environment there were no serious conflicts other than those with the Native Americans, who were quickly sidelined. But Russia was a country that many called home, with local and national cultures and tribes who fought among themselves.

Russia reconciled these groups to each other, as the Roman Empire had done in its time. Russia used the military as an assimilating force, which created a powerful common ground. First of all, this was thanks to the European organization of the army.

Peter’s project to Europeanize Russia and militarize the empire created the conditions for assimilation. The Tsar exerted control over all of these nations for their own benefit.

A particular challenge was the integration of the Muslim population into a Christian state, which was unique in world history. In the Roman Empire, Byzantium was not integrated despite hopes to the contrary.

Such an attempt failed in Spain, and the Muslims were expelled. Only in Russia was integration successful, although it was achieved with great difficulty.

History shows that there are only two paths – colonization, or if that is not successful, an agreement to divide and live apart. Ever since the time of Ivan the Terrible, Russia has conducted a unique experiment, an attempt at not just a multicultural, but a multi-faith symbiosis.

The symbiosis was sufficiently organic that Muslim princes occupied very high positions in the Russian government. Many of them were baptized, but not all. And when the Russian army went into battle, a priest, mullah, rabbi and Lutheran minister would deliver blessings. With a few exceptions, the experiment was a success and Russia never experienced domestic religious wars.

The end of the empire was frightening, but the reasons were neither ethnic nor religious. In 1991 Russia could have disintegrated into separate states, as did the Soviet Union, but this did not happen. Ethnic and religious differences were an order of magnitude less significant than social and civilizational issues.

The Russian Empire broke apart in a sweeping paradigm shift. In place of one country, a new country now stands, just as Italy stands upon the foundations of ancient Rome and Greece on that of the Greek City States.

The author is a historian and the academic director of the “Orthodox Russia: The Romanovs” exhibition now being held at St. Petersburg’s Lenexpo exhibition centre. We thank the exhibition organizers for their help with this article.