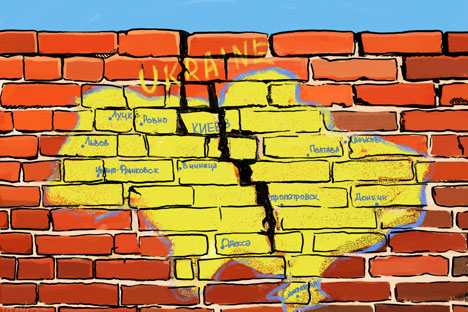 Outside observers fail to understand the role divisions within Ukraine itself have played in the crisis there.

As U.S.-Russia tensions mount over Ukraine and the Crimea, it's important to realize that these tensions largely result from the media spin on real and imagined conflicts among the Ukrainian people. The advantage of the Western media over Russian President Vladimir Putin is huge, because Putin’s influence is confined mostly to within the borders of Russia.

The first and most important spin put on the situation was to portray the situation in Ukraine as a conflict between Ukraine and Russia, not among culturally, ethnically, linguistically and religiously diverse people in Ukraine, as Ambassador Jack Matlock has convincingly argued.

For several weeks I watched on a wide range of TV channels – from Russian channels to EuroNews - how an originally peaceful protest in the Maidan in Kiev gradually turned more and more violent when as rocks and Molotov cocktails were thrown at unarmed and constantly retreating police.

Opinion: What the world needs is “19th century behavior”

The more concessions Viktor Yanukovich made, including the suggestion to have Arseniy Yatsenyuk as prime minister, the more violent the Maidan became.

Finally, right after the compromise accord between the Maidan coalition and Yanukovich was signed – in the presence of Foreign ministers of France, Germany and Poland and Russia's human rights ombudsman Vladimir Lukin – the violence did not abate, as one would have expected, instead the situation got worse.

Yanukovich accepted virtually all the demands of the Maidan, including a return to the 2004 Constitution and the calling of presidential elections before his term expired. The protestors in the Maidan had every reason to celebrate, instead the area became very violent and dozens were killed.

This turn of events was very difficult to understand, until the conversation between the EU Foreign Affairs High Representative Catherine Ashton and Estonian Foreign Minister Urmas Paet surfaced.

The conversation cited opposition figure Olga Bogomolets saying that the leaders of the Maidan were not interested in discovering the source of the snipers shooting in the Maidan because the violence helped the opposition movement.

Some of these Ukrainians in the south and east are ethnic Russians, but most of them identify as Ukrainians who regard Russian as their native language.

This division was felt most painfully by the Russian ethnic majority in the Crimea. Because they were afraid for their autonomous status under a new government headed by Maidan leaders, they made the decision to hold a referendum that could give the region a chance to retain its autonomy as part of Russia. 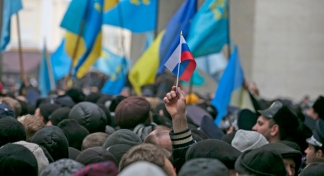 Had the opposition honored the Feb. 21 agreement and retained Yanukovich as president until the May 25 special election, the Crimea would not have revolted. The grab for power in Kiev triggered regional efforts to secure the safety and well-being of their electorate.

If outside powers, including the United States, the EU, Russia, other members of the CIS or the United Nations have a role to play, it must be as a mediator and peace-maker between these divided segments of the Ukrainian nation.

These outside forces should show the same tactfulness, sensitivity, common sense, persistence and patience that they have shown in respect to Northern Ireland, Quebec, the Basque people and Scotland. So far, it looks as if the Western supporters of Ukraine are applying a double standard.

W. George Krasnow is a former head of the Russian program at the Monterey Institute of International Studies, California. Now based in Washington, he runs the Russian-American Goodwill Association promoting better relations between the two countries.