The return of big idea literature 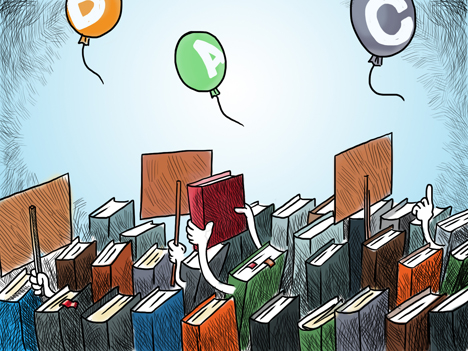 Noted literary critic Andrei Vasilevski wonders whether Russian literature, which lost its ideology when the Soviet Union collapsed, is making a big comeback.

After the Soviet system collapsed, it appeared that the censorship had finally been thrown off. Writers were exhilarated that the grip on their work had loosened. In fact they felt no ideological pressure at all, at least because there was no one left to bother them.

Russian power paid close attention to oil, politics, law enforcement, the state TV channels that distributed information across the whole country – but not to literature.

Historically, Russian literature often played the unlikely role of philosophy, free press, politics and even religion. But 20 years ago, everyone, especially writers, thought they would finally be able to do their own thing.

Portraits of the children of communism

There was freedom of the press, political freedom and freedom of religion; churches opened, new political parties and a parliament were formed; the newspapers wrote what they wanted.

But in early 2000s, the government suddenly remembered literature — and not entirely by its own initiative. People began to complain bitterly that Russian culture was declining, the educational system was falling apart, literature was in crisis, book publishing was in crisis and libraries were in crisis.

The market would not or could not correct the situation, they reasoned, so the authorities needed to intervene.

The dramatic rise of the opposition at the end of the first decade of the millennium fueled the state’s interest. Moscow and St. Petersburg saw a wave of demonstrations of all kinds that writers also participated in.

The state turned its head and saw that yes, there actually is literature and it has social significance. Consequently, the question arose if this attention would limit the freedom of writers and their right to independent speech.

Today's Russia doesn't have that, except for an abstract sense of patriotism and common sense to refrain from criticizing authorities too much - especially the head of state. The government has not developed a set of ideologies that could be presented to the literary community to strictly adhere to. So in that respect, there’s nothing to fear for writers and critics.

There may not be a political ideology, but there certainly is a particular world outlook. That's how it is in Russia - literature that is isolated from society just does not catch on here. The traditions of Tolstoy and Dostoevsky stay deeply in play.

Russian readers are not much interested in literature that has no philosophical or existential meaning. Pure aesthetics, or art for art’s sake, has a miniscule audience. But when a book is anchored by the author’s viewpoints on society, the readers are hooked, whether the work has merit or not.

For instance, Zakhar Prilepin's novel "Sankya,” (2006) was not a masterpiece, to put it mildly – but it is about young revolutionaries. Alexander Terekhov's novels are overly long and dense – but his recent novel called "The Germans" portrayed the Moscow bureaucracy, a very timely topic.

Maxim Kantor’s massive (up to 1,400 page) epics are comprised of nothing more than an aggressively anti-liberal theme. His characters and plot are at a primary school level. But Kantor’s books are popular, because people believe he brings meaning to turbulent times.

Or take Boris Akunin, a very politicized person, author of a best-selling historical series starring detective Erast Fandorin. The novels all take place in the nineteenth century, in tsarist Russia.

These are plain detective stories, but they also explore how a decent man should behave towards the state, what is permissible in society and what is not. And that is what gives Akunin's books their appeal.

I don't think these novels are all that brilliant in terms of plot or style. But they are ideological texts first and foremost, and that is why people read them.

The author is a literary critic and editor in chief of the journal Novy mir.