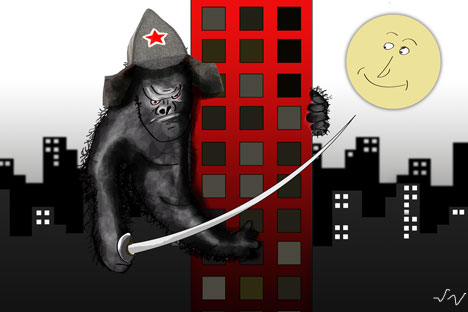 “Intimate Places,” along with “The Major,” which was recently praised by the eminent director Emir Kustrurica (“Underground”) were also heralded at the festival markets as films ripe for European distribution.

“The Major” contrasts with sexy, satirical mashup “Intimate Places” in its more formal, heart-wrenching exploration of morality and the fragility of happiness. Both movies reflect the rich diversity of film making in Russia today.

And finally, “The Geographer Drank His Globe Away,” directed by Alexander Veledinsky, is a tender look at a man’s well-earned midlife crisis.

Twenty years ago, great Russian films like Pavel Lungin’s “Taxi Blues” and Alexei German’s “Khrustalyev, My Car” were hardly distributed at all. The master directors of the 1990s were entirely overlooked on the world stage.

Many films were lost as the entire infrastructure of the industry collapsed in the chaos of the new Russia. In the 2000s, a huge transformation took place with a massive influx of new cinemas and funding for film. Finally, directors were supported again. Still, Russian blockbuster films have been mostly made for a Russian audience.

However a number of high-quality blockbuster and art-house films with box-office potential have industry executives wondering: Could Russian films garner success and distribution outside the motherland? “Stalingrad,” the biggest Russian box office success ever, was recently shown in the United States and China. Still, it’s a long road to real international impact.

Filmmakers view co-productions as the future of Russian cinema on the world market, according to Pavel Bardin, director of “Russia 88,” a thought-provoking 2009 mock documentary about Russian skinheads. Bardin added that making Russian films available on demand on the Internet could fuel international distribution.

Fyodor Bondarchuk’s ‘Stalingrad’: In the trenches of IMAX

The documentary film director Costa Fam, whose film “Shoes” made it to the list of this year's Oscar nominees for short films, agreed with Bardin.

An era of international co-productions

These days, many Russians are involved with the film industry in the U.S. “They study at film schools in the U.S. and Europe where they get acquainted with the principles of international cinema, and communicate and interact with their classmates from other countries,” Bardin said.

“It is Russians who will shoot the films of the future," said Fam, adding: “I think an era of total co-production is coming.

“National borders are more fluid, social networks are popular and use of the Internet keeps growing. The biggest Hollywood blockbusters are being shot with Chinese, Arab and Russian money, and our actors are shooting films abroad, and vice versa, with teams from different countries working together on projects. Viewers are indifferent towards the national origin of a movie. What is important for a viewer is an interesting story and characters in which a person recognizes or imagines himself – that’s the key to success with viewers.”

The subtitles problem and offending Chekhov

The only obstacle in the way of mass audiences, the director Fam said, is the language spoken by the characters. A very small percentage of English-speaking viewers are willing to view subtitled films.

“If a director wants to expand his audience, he should shoot in either English or Chinese. If we are interested in the history of Shakespeare's Hamlet staged in Russian, why shouldn't we try to shoot Chekhov's ‘Seagull’ in English? Neither Shakespeare nor Chekhov has felt offended for a long time now.”

Historically, Russian films have been made for the Russian audience. The producers set budgets considering the interests and purchasing power of Russian viewers (and Russians residing abroad who would purchase the movie).

However, in Film Search, the largest database of movies in the Russian-language Internet, profiles of many Russian films boast the Global Première note. "Global" means the former Soviet Republics: Ukraine, Kazakhstan and the Baltic countries.

Russia-produced films are also shown at second-tier festivals held in the Czech Republic and Finland, as well as viewers in China (as was the case with "On the Game" by Pavel Sanayev) and Turkey.

But that is where the distribution of Russian cinema usually ends.

The number of exceptions is growing. The best of Russian art house films tend to get some small distribution in the U.S. and Europe. Leading European film festivals have traditionally been interested in Russian existentialism and explorations of the vague but enduring notion of the “Russian soul.”

Films that make their way to Cannes, Venice or Berlin are the work of directors outside genre limits and follow the traditions of European existentialist cinema.

Examples of such internationally successful Russian films in recent years include “How I Ended This Summer” by Alexey Popogrebsky; “Yelena” by the revered Andrey Zvyagintsev; “Silent Souls” by Alexey Fedorchenko; and the German Russian co-production, “Faust” by Alexander Sokurov.

These movies earned full distribution in Germany, France, the Netherlands and other European countries, and were shown in American and Canadian film festivals.

Sundance to feature documentary on Russia by Indian student

“Stalingrad” is unusual in that the film is a Russian blockbuster that also offers international appeal. There’s no doubt the demand for Russian cinema has increased in recent years, and has become broader than just art-house films.

Another example is the 2011 work, “Vysotsky: Thank God He’s Alive” which focuses on a single Vysotsky concert in Uzbekistan. Remembering the poet and songwriter — known as a “voice of dissent but not a dissident” in the Soviet Union — brought Russians to tears.

But the reason this film was successfully distributed in several European countries is twofold: An impressive promotional campaign by the state-owned Channel One, and the fact that Vysotsky is known far beyond Russia. Finally, the actor Sergey Bezrukov wore a life mask that made him look eerily like the greatest of Russian singers.

The author is a Hollywood Reporter columnist.