Why Ukraine needs a new constitution fair to all 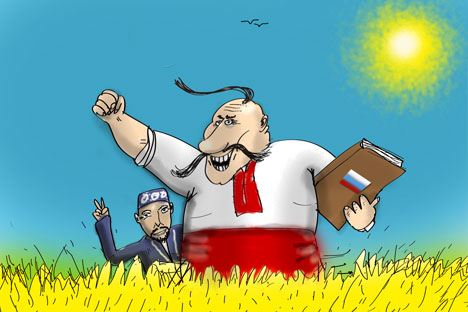 The Russian Ambassador to the United Kingdom Alexander Yakovenko explains Russia's official position on the past events in Ukraine.

The current situation in Ukraine is nothing short of a deep social and political crisis. Severe tensions have been unleashed in the country provoked by the leaders of Maidan, a small group of people driven by extremist ideology and intolerance; these tensions threaten the future of Ukraine as a modern democratic European nation.

With the rights of national minorities violated and the interests of regions disregarded, the people of Crimea found it necessary to determine their own political future by means of a referendum – and to do it fast. We have to respect their right to self-determination, a right guaranteed by the UN Charter.

There is currently no legitimate executive authority in Ukraine. The acting government was formed by the parliament under threats – and even direct use of force – against MPs by extremists. Local governments all over Ukraine are taking the situation into their own hands. With a real risk of civil war and social disintegration, there is still a chance to save Ukraine from political, social and, not least, economic collapse.

The agreement signed on February 21, 2014 by President Yanukovych and opposition leaders, and mediated by the foreign ministers of Germany, France and Poland, provided for a constitutional reform in Ukraine. This idea remains fully relevant.

Any new constitution should recognise the legitimate aspirations of all Ukrainians and all of the nation’s regions to live safely in accordance with their traditions and customs. The principles of rule of law, protection of human rights, including the rights of all minorities, freedom of speech and activities of political parties and mass media should be enshrined in it.

Ukraine’s political system should be based on the idea of a democratic federal state such as, for example, Germany, Russia or the U.S.. Its status of military-political neutrality should be enshrined in the constitution and guaranteed by the EU, Russia, the U.S. and a UN Security Council resolution. Along with Ukrainian, Russian should be given state-language status, while other languages granted a status in accordance with the European Charter for Regional or Minority Languages.

Regions should independently elect their legislative and executive bodies through a direct vote and have wide authority, reflecting the cultural and historic identity of each to them, with regard to economy and finance, language policy and education. The rights of national minorities living in the federation’s constituent entities should be protected; interference in matters of religion and faith should be strictly prohibited.

Following the adoption of a new constitution by a nationwide referendum, national elections should be held, together with elections of legislative and executive bodies in each constituent entity. A broad and objective international observation will be crucial. These are the proposals that Russia has put forward to our western partners. We believe we could unite our efforts in encouraging Ukrainians to find common ground on the principles outlined.

Paris talks yield progress on Ukraine for Russia and the U.S.

The multi-ethnic Ukrainian people have the right to live in a democratic and civilised state with the future of Ukraine in their own hands. The February 21 agreement was based on this assumption. It is not yet too late to make good on those commitments, if the Ukrainian revolution is to be about democracy and human rights and not about an extremist minority imposing a national-radical narrative upon the rest of the society.

If the former is the case, then Russia is ready and willing to help.