Is the crisis in Ukraine a plum ripe for picking? 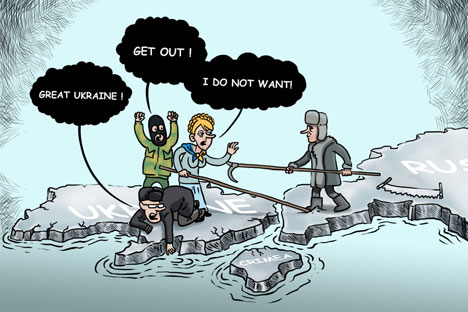 Britain's former ambassador to Moscow discusses the roots of the current crisis.

For a thousand years Russia and Ukraine have been joined in a history whose meaning both sides dispute. These historical emotions are important: they drive the current politics.

Kiev was capital of Rus, the first great Slav state. But in 1240 it was destroyed by the Mongols. The lands later known as Ukraine were fought over by Tatars, Cossacks, Poles, Lithuanians, Turks, Swedes, Germans, Austrians and Russians until all – except the western region, which fell to Poland – reverted to the Soviet Union.

The metamorphosis of Ukraine

Six million people died in Stalin’s artificial famine; as many again died in the Second World War. Ukrainian nationalists fought the Soviets under their leader Stepan Bandera, a hero in western Ukraine, but a traitor, a fascist, and an anti-Semite to many Russians. After the war, Soviet repression resumed. Among Ukrainians the memories are vivid.

Russians saw this history quite differently. They believed what many Ukrainians dispute: that Russian history flowed directly from medieval Kiev to modern Russia. For most Russians, the separation from Ukraine after 1991 ached like an amputated limb. They could not believe it would last.

When it became independent in 1991, Ukraine had many of the requirements for success. The ethnic divisions were manageable. But Ukraine’s new leaders failed to modernise the economy. Corruption ran out of control. The gap widened between those who looked to the West and those who looked to Russia.

Western governments believed that the end of the Cold War and the collapse of the Soviet Union gave them the opportunity to re-engineer the geopolitics of Eastern Europe. They moved to draw into their orbit first the Soviet Union’s former Warsaw Pact allies, and then former parts of the Soviet Union such as the Baltic states, Ukraine and Georgia. Some in the West argued this would breed huge bitterness even among liberal Russians, and that a renascent Russia might seek to do something about it. That was, after all, what happened in defeated Germany after the First World War. The critics were brushed aside.

The Russians noticed all this. Their sense of resentment and impotence was fuelled by Nato’s bombing of Russia’s ally Serbia in 1999, and its incursions into Iraq, Afghanistan and Libya without, as they saw it, proper legal cover from the UN. They concluded that western rhetoric about “democracy”, “human rights” and “international law’’ was mere hypocrisy. They did not believe – what was in fact true – that at first there was much goodwill for Russia in the West, even if western aid was often misdirected, condescending and ineffective.

Putin shared his countrymen’s feelings of humiliation when the Soviet Union collapsed, feelings that were reinforced by what they perceived as a western conspiracy against their country. His central objective has been to restore Russia’s place in the world. Crimea is only the latest prize. It had been Russian for most of its history and had a majority of Russian inhabitants. It seemed a plum ripe for the plucking. His largely bloodless annexation of the peninsula, fuelled by grossly exaggerated propaganda about extremist threats to Ukraine’s peaceful Russian citizens, has won him massive popular support.

But there is a risk he and his people will believe their own propaganda, and success will go to his head. He knew when to stop after his brief war against Georgia in 2008. If he now pushes his luck and intervenes in Ukraine proper, he would land Russia in an economic and political quagmire.

Putin has set the cat among the pigeons, and he glories in it. But the West bears part of the blame, too. Its policymaking has been ignorant, sometimes irresponsible, often arrogant. It is not left with many options; it will not go to war and some in the West, therefore, talk of appeasement, Munich-style. But the West cannot avoid doing some difficult things if it is not to lose credibility and self-respect. It will doubtless support the Ukrainian economy, a dauntingly expensive business; apply serious sanctions to Russia, which will inevitably damage the West, too; cut Europe’s dependence on Russian energy; and find ways to reassure Nato’s nervous eastern members.

Both sides have plenty to lose. In mid-March, Russia offered talks, including the Ukrainians and the West, about a federalised and neutralised Ukraine, on the condition that there was no further fuss about Crimea. For the West to enter into talks on that basis would shake all the countries in Eastern Europe who fear Russian revanchism.

Discreet diplomatic contacts seem to be continuing on Syria and Iran, perhaps even on calming the current row. Moscow and Kiev are talking to one another. But a diplomatic settlement will not happen soon. Suspicions have been aroused and will not quickly die down. Russia’s move towards a modern economic and political system has taken a blow.

Western actions are not very likely to deter Putin if he is determined on further action. But they may give him pause: even the threat of western sanctions has put the already shaky Russian economy under pressure. His present triumph may wilt as his Russian admirers begin to feel the economic pinch. As their prospects diminish, they may lose their enthusiasm for him. The game is not over yet. But the West’s relations with Russia are liable to go into the freezer for some little time.

Author Rodric Braithwaite was British ambassador in Moscow from 1988 to 1992. His latest book, Afgantsy: The Russians in Afghanistan, 1979-89 (Profile Books) is published in English and Russian.