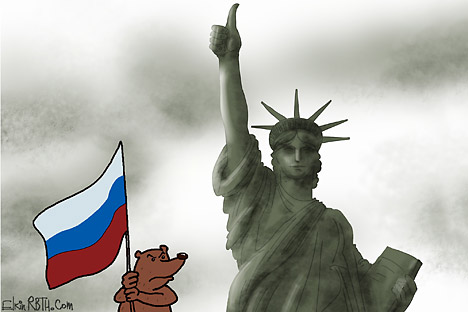 The immense gulf in mutual distrust and suspicion that has characterized relations between Russia and the U.S. in recent years has been laid bare by the degree of misunderstanding “experts” from each side have shown in their attitudes toward the other during the Ukrainian crisis. Why do we appear to know each other less well than during the Cold War?

One of the most foolish views that has been voiced recently in discussions of U.S.-Russian relations is a judgement that we are alike. Almost comparable in its foolishness is the contraposition of our supposed spirituality and their supposed lack of spirituality.

In the light of today’s flashes of mutual hatred, it seems that it is only by a strange coincidence that we have thus far not had cause to fight with each other directly. For decades, relations between the two countries were friendly, except during the Cold War.

Taking this into consideration, the following words, spoken in the mid-19th century, are even more surprising: "There are today two great nations in the world which, having started from different points, seem to be advancing toward the same goal: These are the Russians and the Anglo-Americans. To attain their aims, America relies on personal interest and gives free scope to the unguided strength and common sense of individuals."

This was written in the 1830s by Alexis de Tocqueville, the author of the canonical work Democracy in America. This book is on the list of required reading in many courses at universities in the United States.

"Russia in a sense concentrates the whole power of the society in one man,” wrote de Tocqueville. “America has freedom as the principal means of action; Russia has servitude. Their points of departure are different and their paths are diverse; nevertheless, each seems called by some secret desire of Providence one day to hold in its hands the destinies of half the world."

What am I saying this for? The point is that the present-day complete failure of all post-Cold War developments is paradoxically taking place when globalization, it appears, has already irreversibly turned the world into a space open to all informational, financial and other winds.

It seemed that this total interdependence would become a guarantee that politicians would abstain from rash conduct in the international arena. An abyss has opened up between us – the civilizational abyss is now much deeper than it was even during the Cold War. This has been accompanied by the total helplessness of experts on both sides to understand each other.

The standard of American Sovietology, in my opinion, was far from being academically ideal. However, country-by-country studies of "the potential enemy" were widely represented at university level (the highest level in the U.S.).

The choice of topics available for those studying the USSR was immensely broad, and students willingly signed up for such courses, which were generously funded. Most importantly, the U.S. administration listened to the experts. However, in no way did it influence the image of the Soviet Union which was replicated on a mass scale in Hollywood-made films.

The breakup of the USSR meant the collapse of Sovietology as well. The money, students and university positions have gone. Why engage in the study of a country that "lost" the Cold War? The fashion for Sovietology was at first replaced with Sinology, and now with Arabic and Islamic studies.

It was the mass media that dealt the final crushing blow to serious Sovietology. Triumphant political populism (according to which all decisions need to be "sold" to the voter via TV) has led to an extreme simplification of politics on a par with the "Hollywood level" of a fight between the good guys (those who are in favor of democracy) and the bad guys.

With this simple yardstick, they go around the world, applying it in the same manner to Afghan mujahideen and Ukrainian oligarchs. These days, there is no place in the mass media for experts with their nuances – i.e. those who say that everything in the world is not that simple.

All of this can be said about Russia’s American studies as well. The standard in the Soviet years in academic terms was very high. Just one small point: Academic Georgy Arbatov (director of the Institute of the U.S. and Canada) was directly involved in the decision-making process to send Soviet troops into Afghanistan. Although Soviet leaders did not lend an ear to his skepticism, the fact that comprehensive analysis took place before making decisions at the highest level was clear.

At present, the mechanism used to make major strategic decisions is not clear, but we can guess - with horror - what the likely mechanism might be. Sometimes such decisions seem to be based on the viewing of yet another hysterical TV talk show that was staged there by the same people.

Russian media today have not even the slightest similarity with the media products we had in the Soviet era, which were of remarkably high quality for their time.

No newspaper columns would be long enough to list the vast array of American myths about Russia and vice versa.

When it comes to the misunderstanding of U.S. politics by our politicians, the toughest nut to crack here is the powerful idealistic missionary component in U.S. politics. And that the support of NGOs from their side is not always for the sake of "orange revolutions".

There is just as much misunderstanding among the American political class, for example, as to what Ukraine means for Russia.

We have three or four people among political newsmakers that have at least a fair idea of what the role of Congress is (and how it works), as well as the role of the judiciary and the press in U.S .politics.

By the way, by way of an analogy with Tocqueville, I would include the book by Marquis Adolphe de Custine, entitled Letters from Russia in the list of required reading for our universities. It lists all the typical views about Russia which are still characteristically held in the West:

Read more: America through the eyes of a Russian

"Russia is a country of absolutely useless formalities."

"The abundance of worthless, totally unnecessary measures... makes it necessary to have an infinite set of all sorts of bureaucrats."

"The rich are not fellow citizens of the poor."

"Russia is governed by a class of bureaucrats ... and is often governed against the will of the monarch. ... The autocrat of all Russia often notices that he is not as almighty as he is said to be, and with astonishment, which he is afraid to admit to himself, sees that his power has a limit. This limit has been set for him by the bureaucracy..."

We know each other less well than we did before, and in fact we have no desire to know each other better. However, it is not worth taking this to the point where history will force us into mutual understanding when we are already in the trenches of a nuclear war. It is time to stop, to look closely at each other, and to come to our senses.