What must be done to reduce tensions in Ukraine 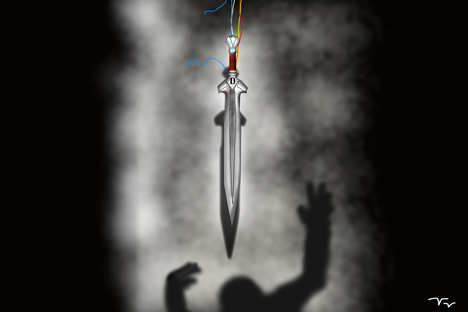 Alexander Yakovenko, Russia's ambassador to the UK, discusses Western media coverage of the situation in Ukraine and the role Russia can play in resolving the crisis.

The situation in Ukraine is tense, though there are signs of diplomatic progress. At the Geneva meeting on April 17, Russia, the US, the EU and the Kiev authorities agreed principles that, if implemented, may lead to de-escalation. They include disarming illegal armed groups, vacating illegally seized public buildings and spaces, an amnesty for all protesters and the launch of an inclusive, transparent and accountable constitutional process. All parties condemned and rejected expressions of extremism, racism and religious intolerance, including anti-Semitism.

Unfortunately, these provisions have been interpreted in Kiev and in western capitals as commitments undertaken by Russia with regard to the situation in eastern Ukraine. It is hard to consider this approach as anything but a deliberate distortion of reality.

First, it is wrong to portray the situation as if the main problem is in the east of Ukraine. Yes, people have taken up arms and seized public buildings. What our western colleagues don’t want to see is that these actions are a reaction to what happened in Kiev – to the violent unconstitutional coup, to attempts to curtail the status of the Russian language, to calls by extremists for punitive operations in the east, to the inability of the authorities to end provocation or begin meaningful dialogue with Russian-speaking regions. One cannot expect people to go home when no steps are being taken to end threats from Kiev and western Ukraine.

Second, it is unacceptable that the situation in the east is described as a result of Russian meddling. We haven’t seen the slightest proof of that. Kiev and Washington are unable to corroborate their claims by anything else but the fact that the activists speak Russian and hold Kalashnikovs – which is also the case for most Ukrainian servicemen in that area. British reporters on the ground overwhelmingly agree the protest movement has local roots and is manned by local residents. That Russia can order them to stop protesting is pure fantasy.

In short, by blaming eastern activists and Russia, Kiev and their western backers are trying to divert attention from the lack of positive steps on their part. Instead of disarming the Right Sector extremists, the authorities in Kiev are continuing to threaten the east with an “anti-terrorist” operation to be performed with the participation of “civil society activists”. Those are openly recruited by the neo-Nazi Right Sector group in Maidan square in Kiev.

The protest camp in central Kiev is still in place, and the authorities have announced that the Geneva agreement doesn’t apply to it since it is “lawful”. No amnesty law has been passed. The constitutional process remains behind closed doors with no eastern participation.

In this context, it is amazing to read western politicians praising the efforts by the Kiev government in “implementing” the Geneva accords and calling upon Russia to follow suit.

As with many other international and domestic crises, the key thing that Ukraine is lacking is trust. The authorities in Kiev badly need to take urgent, clear and meaningful steps that could, if not generate confidence, at least limit the current level of mistrust that the east feels towards them.

Time is running out, and not only in terms of growing frustration and determination of the eastern movement, but also in the light of the dire economic situation in Ukraine. If the current leaders continue to see the situation exclusively through the prism of “Russian aggression” instead of addressing the real problems, they risk plunging their country into an economic abyss.

Such a scenario is deeply troubling for Russia and the Russian people, who wish their Ukrainian brothers and sisters well, but the risks are increasing with every passing day.