Damascus set for a bloody May 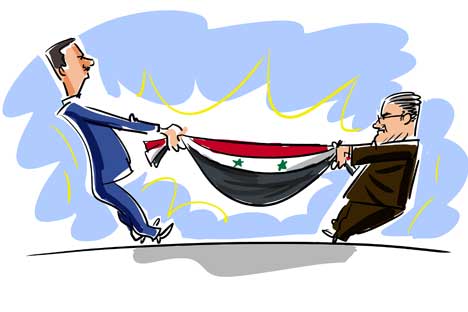 Analysts believe embattled Syrian President Basher Assad might face competition from within his family as the next elections approach.

Some Arab experts predict that this May in Damascus may become the bloodiest month in Syria that country has ever seen in those more than three years of uprising.

As the date of presidential elections in Syria comes closer a possibility of massive rebels attack on Damascus and its suburbs rises.

Perhaps this very fact reportedly forced Assad to pull out his troops from Aleppo.

All this field developments are taking place on the backdrop of a growing split inside the inner circle of Assad’s family. There are some rumours about very strained relations between Asaad and his cousin Rami Makhluf.

Rami reportedly has lost a big part of his $14 billion that was allegedly transferred with the help of Russian banks in Ukraine and Belarus where money were deposited in a very tricky way in various local banks (this information needs more verification).

By no means, do we believe rumours that Rami has spent money on wine and girls and to support (a little) Ukraine uprising instead of helping his dearest cousin fight terrorists in Syria. But Rami reportedly has developed some secret ties with western intelligence agencies (as he has already had great relations with some Russian agents) to find a way to come back in Syria by replacing his cousin as a president.

Some sources claim that Rami and his group in Syrian leadership (military-Ali Mamluk and civil- Walid Mouallim) were among strongest supporters of the peaceful power transfer during the Geneva-2 talks. But Assad with his friends has apparently managed to ruin these international efforts to bring the regime and the opposition around the negotiation table.

The one visible victim of that Geneva-2 gathering was Syrian Foreign Minister Walid Moullim who’s now reportedly dying in one of Beirut hospitals (if not dead yet). The second is Lakhdar Brahimi who reportedly resigned recently.

Rami claims he can play a role of guarantor for the security of the Alawi community forgetting that he previously bankrupted many of them.

It is hard to imagine what Rami could count on, (especially if it’s true that he has lost his wealth) when he promised to sacrifice a lot for the reconstruction of Syria while appointing himself as a general manager or supervisor (read prime minister).

When Assad declared his readiness to run in the upcoming presidential elections in June, he buried all the dreams of a political resolution of the crisis and made a very clear final choice to fight till the last Syrian (may be Lebanese as well).

But if some influential political forces really want to push Rami as an interim ruler of Syria, the best way they could realize this plan is to begin with an attack on Damascus led by ISIL and JAN fighters. With this they could scare to death all the members of the “progressive community” in Europe and make their Arab, Israeli, Turkish partners and clients and by default the Syrian political opposition, more flexible. And finally create such a mess that could let them push anyone as a new president.

Tony Blair seems has already begun this campaign. Who’ll be the next?

Dr Vladimir Akhmedov is senior researcher in Moscow Institute of Oriental Studies. This article was first published in the writer’s blog.