Pop versus politics: Russia steels itself for Eurovision backlash 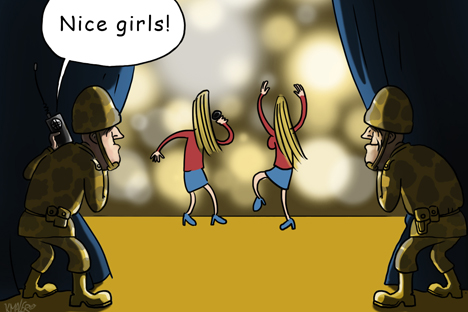 Russia should have the same chances as every other participating nation in this year’s Eurovision Song Contest, but given the tense situation in Ukraine, the country’s representatives at Europe’s annual festival of musical kitsch are likely in for the most politicized voting in the history of the contest.

On November 9 last year, the organization Eurovision 2014 sent Russian contest broadcasters Channel One and the All-Russia State Television and Radio Broadcasting Company (VGTRK) a letter indicating fans’ concerns over the passing in Russia of a law banning homosexual propaganda.

In other words, the European Broadcasting Union (EBU) was worried about ratings. If Russia were to win, Eurovision 2015 might be held in Moscow, which would have a strong impact on the spirit of the competition, which many consider as no more than a yearly gathering of representatives of sexual minorities.

All the same, no one in the EBU was planning to have it out with Russia. Russia and the ex-Soviet states are a gigantic – and the most active – audience for the contest. There is no way without them.

Even the scandal over the participation of an Austrian transvestite - the bearded woman Conchita Wurst - in this year’s contest is unlikely to result in the cancellation of its broadcast, despite all of the petitions from concerned post-Soviet citizens and organizations. Eurovision is far too dainty a morsel for the broadcaster.

It seems, however, that the state does care. There was an unprecedented occurrence last year. The episode involving the incorrect tallying of votes for the Russian participant Dina Garipova was discussed at the highest level. The Minister of Foreign Affairs, Sergei Lavrov, shared his point of view on the matter during talks with his colleague from Azerbaijan.

“Moscow is not pleased that a Russian contestant stole votes in Eurovision,” said Lavrov. It turns out that people in the government can take open offense over what is, in general, a comic trifle such as a matter of several points on a TV contest.

This year, the 17-year-old twins Maria and Anastasia Tolmacheva will perform Russia’s entry at Eurovision. In 2006 they won the Junior Eurovision contest with the song Spring Jazz, which they wrote together with their mother. In 2014, the sisters will go to Eurovision with the song Shine.

The song Shine has all the marks of a potential smash hit. But estimating its chances in comparison with the other thirty-six entries is a difficult task.

It is not that the other songs are stronger (though bookmakers are currently backing acts from Azerbaijan, Sweden, Denmark, Hungary, Belgium, Romania and Great Britain). It is clear that all previous contests that have been deemed “politicized” in Russia will seem like feasts of justice compared to what awaits the country this year.

The Tolmacheva sisters are to be pitied in advance. They are nice girls who have learned the ropes in the pop world, but haven’t been on the front lines of political battles yet. Observers are already reading propaganda in the lyrics of their song in utter seriousness.

The British journalist William Lee Adams apparently heard “Crimea” (Krym) instead of “crime” in the rather mundane line “Living on the edge, closer to the crime — cross the line a step at a time.” And on this basis he launched an internet campaign advocating Russia’s disqualification from Eurovision.

However, the EBU had already approved the song’s lyrics long before and has no complaints with Russia, though it has made no comment on the journalist’s gesture. But one should not forget that the events are unfolding against a background of information warfare in which this “campaign for suspension” may have already turned Russia’s removal from the contest into a fait accompli in mass consciousness. Meanwhile, the Tolmacheva sisters are having to answer numerous questions about Crimea instead of rehearsing their entry.

So, this year we are likely to witness a vote on more heightened political grounds than usual. It is clear that many in Europe will vote for Conchita Wurst in defiance of the Russians. It is also clear that enthusiasm has waned in Latvia and Estonia, which supported Dina Garipova in votes last year; they are already seriously talking about a “Russian threat” along the lines of the Ukrainian scenario.

There’s no use hoping for benevolence from Great Britain and Ireland, who reacted unexpectedly positively to Dina Garipova. We will remain silent on the Tolmacheva sisters’ chances on getting Ukrainian votes. Hopes can be placed only on our Serb and Slovene brothers. As always.

Most likely, in May 2014 we will see the most politicized voting in the history of Eurovision and the merit of the Russian act will be relegated to the backburner.

It would be strange to count on a Russian victory. But it is a show the whole continent will be watching and the right performance by the Tolmacheva sisters could serve as a message capable of burnishing the country’s tarnished image.

First published in Russian at Ogonyok.