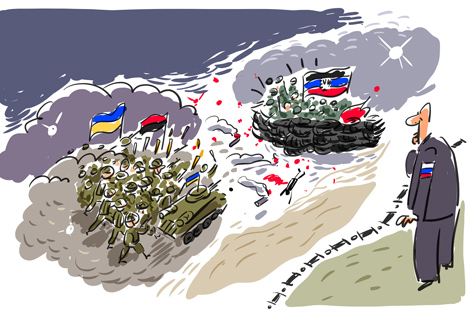 All the signs are that a military invasion of Ukraine’s restive eastern provinces by Russian forces is not on the cards. The likeliest scenario is that Moscow will allow Kiev to gradually claw back control of the east, though a prolonged crisis in relations with the West remains unavoidable.

It appears that the Russian leadership has taken a decision to refrain in principle from an open military intervention in southeast Ukraine. That much follows from the reported details of a telephone conversation between the Russian and U.S. defense ministers and the alleged subsequent withdrawal of Russian troops from the border with Ukraine. That, in turn, served as a starting point for a new and more active phase of the military operation against pro-autonomy gunmen by Ukrainian government forces.

Days of mourning declared in Odessa

As for covert Russian military participation in the events in the region, if there was such, it has been insignificant. The armed clashes of the past several days have made it clear that the pro-Russian rebels have only a very small core of people with real combat training.

An important role in that core group, it would appear, belongs to Russian nationalists with real combat experience behind them, but their attitude to the Russian state is ambiguous, to say the least.

The man leading the armed militia in Slavyansk, Igor Girkin-Strelkov, judging by data available so far and by his own statements on internet forums, adheres to rather radical nationalist views. He likes the current ruling regime in Russia no more than do the participants in opposition protests in Moscow’s Bolotnaya Square.

His image is further enhanced by the richness of biographical details he himself has made public (including information on where he used to serve), the lack of even the most basic effort to maintain secrecy, and his involvement with the historical re-enactment movement.

Strelkov is, most likely, a retired low-rank officer with a special-purpose FSB unit with some aspirations and ideas on "how to rebuild Russia". This is not such an uncommon type among former security officers in Russia, take for instance the now convicted colonel Vladimir Kvachkov. People like this often choose to be in the center of events, but official bureaucracy does not like dealing with them.

There is nobody in southeast Ukraine who looks anything like the well-trained and impressively equipped men in uniforms without insignia who were deployed to Crimea ahead of the referendum there. The small combat core of the rebels have rather modest armaments. Moreover, there is nothing solid to indicate that these armaments came from post-Soviet Russia.

The shoulder-fired air defense system that was used on the first day of fighting was most probably seized by the rebels when they disarmed units of Ukraine's 25th Airborne Brigade. In Soviet times, each airborne company was supposed to have four portable air defense systems, and one can assume that today's regulations in the Ukrainian armed forces are not that much different.

The fact that since the first day of heavy fighting the system has not been used again confirms that it was booty, most probably the sole such system seized, with few munitions.

Opinion: What must be done to reduce tensions in Ukraine

The role the Russian secret services play in the drama unfolding in southeast Ukraine consists in no more than watching the situation and, perhaps, maintaining contacts with individual militia leaders. Russia intends to sit and watch Kiev suppress the rebellion in the southeast.

There are probably two reasons for this. The first is the fear of economic sanctions that the U.S. and Germany have threatened to impose in the event of any military intervention. The second is that Moscow does not want to get involved in a conflict that could be potentially destructive for its economy over large territories with large economic problems and a predominantly Ukrainian population whose sentiments are far from uniform, which Russia has never been particularly interested in.

At the moment, it appears that the Ukrainian government forces, despite their poor organization, low morale and poor training, are slowly, with setbacks and losses, but surely closing the circle around the rebels. They will most probably regain control over those territories in time to make it possible to conduct a presidential election on May 25 with at least a semblance of legality.

It would however be erroneous to interpret this as a sign that an end to the Ukrainian crisis is in sight. A military operation, conducted by poorly trained troops and with support of paramilitary nationalist groups, cannot but cause anger among the population.

The tragic events in Odessa will only make this anger worse. This is a powerful time bomb planted under Ukrainian statehood for generations to come.

The prospects of that statehood were unclear as it is. After Yanukovych was overthrown, Ukraine reaped all the possible evils of a revolution except its only possible benefit: a change of political elite. All the visible presidential candidates, including Yulia Tymoshenko, have a long history in Ukrainian power.

At different times, all of them have been perceived as an epitome of local corruption. Ukraine is doomed to a long political crisis with a further radicalization of politics, with the factors of ethnicity, language and religion coming to the fore.

Russia, the EU and the U.S. will inevitably be drawn into all new domestic Ukrainian upheavals. Given the mutual distrust their leaders have displayed, confrontation between them is set to continue.

Furthermore, after Russia’s annexation of Crimea, the U.S. has the important task of restoring its strongly undermined clout by punishing Russia, turning it into a rogue state. Direct and indirect sanctions will be imposed against Russia gradually over a period of many years, as the European and U.S. economies become prepared for them.

By refusing to intervene in Ukraine's southeast we have not averted the threat of sanctions but have just bought ourselves some time to prepare for them by re-orienting our economic, science, technology and other ties towards Asia and by putting import-replacement programs in place.

It is for the sake of this that, for the next several weeks, Russian TV channels will be showing us how "the other side" in eastern Ukraine are gradually killing "ours" with the wholehearted approval of the U.S. president and the German chancellor. This spectacle will change Russian society, predetermining Russia's political history for decades to come.