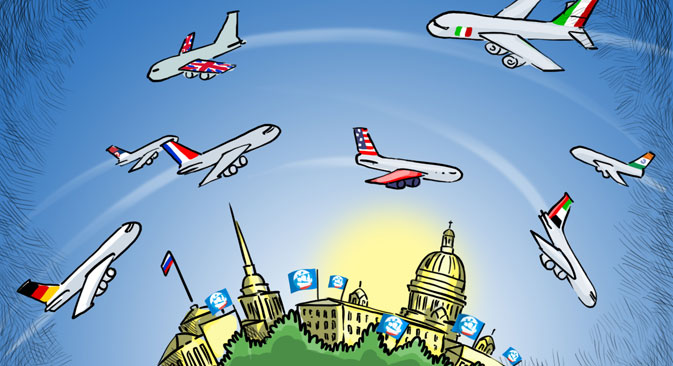 Managing Partner for PwC Russia David Gray reflects on the importance of the upcoming St. Petersburg International Economic Forum as a platform for dialogue and cooperation for the world’s business elite and why this year’s event represents a particular challenge for both Russia and the participants.

The opening line from Charles Dickens’s Tale of Two Cities may be an unusual tagline for this year’s St Petersburg International Economic Forum (SPIEF), but it does capture something of the uncertainty of the times in which we find ourselves in Russia and beyond. The forum comes at a moment when Russia’s place in the international economic community has rarely been subject to wider debate and scrutiny.

The geopolitical developments around the ongoing crisis in Ukraine will, at the very least, color many of the conversations and debates that the SPIEF will host in 2014, making it both a challenging time to host the event, especially for the organizers, but also an exceptionally interesting one.

Over the last few years the SPIEF has established itself as a major platform on which Russia engages with the international business community. The scale and sophistication of the forum has developed significantly, with the content improving in terms of the quality and breadth of the topics covered and the stature of speakers attracted, and certainly the fundamental infrastructure of the event has improved to a world-class standard. By any measure the SPIEF is an impressive gathering of “the great and the good” that many in Russia and internationally look forward to attending annually.

As the Russian economy has grown, and Russia’s integration with the global economy increased, the level of interest in Russia as a market and as a market player have both expanded; the forum has become more relevant and important to the global business community. I think that it is fair to say that the success that Russia has achieved over the last 10 years in modernizing as a country and economy is both reflected in the success of the SPIEF and in part reflects the impact of the forum as a window through which foreign business can see Russia in a new light, boosting business and investment in the country.

Even though the forum is not exclusively about Russia - as the name suggests it is an international economic forum - it is clearly designed to help Russia to put the country on the global economic map by providing it with a platform to both tell its story and seek to engage with, and benefit from, global thought leadership.

Ironically, the controversies this year over who will or will not turn up at the event only serve to highlight how significant the SPIEF is perceived to be as a meeting place where senior businesspeople and other thought leaders come together and network around global and regional economic developments and trends. This enhances Russia’s standing in the global economy and encourages closer economic ties, regionally and globally.

Strong economic ties and growth in trade connections bring many benefits. The greater economic integration of Europe over the last 70 years has certainly been a critical factor in overcoming a history of conflict across the continent. I think business has a role to play in shaping the agenda around regional and global political developments, helping to ensure stable economic and political relations between countries that allow all parties to benefit from higher levels of investment, economic activity and, ultimately, greater prosperity for their citizens. Encouraging deeper economic ties is clearly a critical part of the mission statement for the Forum, and a very worthy one.

As in any year, it will be interesting to catch up in St. Petersburg with colleagues from around the world to find out how they see the immediate future. Although not officially on the agenda, inevitably Ukraine will be widely discussed, and it is right and healthy that such a senior audience will be able to talk about such a complex situation. Hopefully we in the business community can be part of the processes of moving things to a more positive agenda for Ukraine. Certainly I do not believe that Russia has any interest in Ukraine being economically unsuccessful; I think it has been bad for Russia that the Ukrainian economy has underperformed so badly for so many years. If a more stable and prosperous Ukraine emerges from the current difficulties, one with better governance and stronger prospects for sustained economic growth, that will not only be great news for Ukrainians, it is also likely to have direct positive economic benefits for Russia as one of the country’s closest trading partners and its immediate neighbor.

In terms of the SPIEF 2014 it is important that we make sure that Ukraine is not the only topic for conversation – there are myriad other important issues that are worth discussion which touch upon Russia and the global economy. It is one of the strengths of the forum every year that there is such a wide range of topics covered. In 2014, delegates to the SPIEF will again face the challenge of selecting what they prioritize out of the menu of challenging and entertaining sessions.

Personally, I am looking forward to participating in a couple of the sessions in particular this year, sessions dealing with key issues around talent - such as a debate about the need for a road map for improving Russia’s university system and one focused on the importance of talent for business.

I think that the 21st-century century global economy will be dominated by two things – one is technological developments and the other is competition for talent.

This latter competition is going to be a global competition. The successful countries, cities and companies will be those who have a highly skilled workforce who add value and create innovative ideas, products and services. So making sure you are competitive in terms of education is going to be one of the key factors determining where economic growth and prosperity is located around the world.

Of course that is only my view – I look forward to hearing what everyone else thinks in St. Petersburg.

David Gray is Managing Partner for PwC Russia, the largest network of auditing and consulting firms in the country.