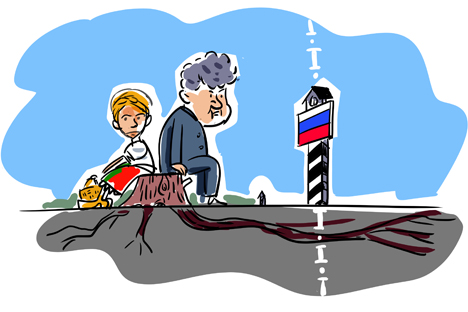 Though many of the presidential candidates in the upcoming elections in Ukraine are taking care to position themselves firmly as anti-Russian, the truth of the matter is that the overwhelming majority of Ukrainian politicians are in one way or another tied to Russia – and the fragile state would do well to keep this in mind when planning for the future.

The candidates for the presidency of Ukraine, having reached the end of the pre-election race, are regularly competing to outdo each other in demonstrations of their commitment to European integration and their hostility to Russia. To a significant degree, their performances are not even directed at their own Ukrainian voters, are an address to Western observers, supporting the thesis that “Ukraine is not Russia.” Indeed, the presence of anti-Russian sentiment, unfortunately, has for the West long been synonymous with a commitment to democracy. Although the substitution of these concepts here is obvious, nevertheless, experience shows that the West is prepared to shut its eyes to plenty in exchange for a critical attitude towards Russia.

This is not the point, however, but rather the fact that all of this, to a certain extent, is no more than a spectacle put on for outside observers. Indeed the overwhelming majority of Ukrainian politicians are in one way or another tied to Russia, either presently or in the past. It is not that they were all “born in the USSR”, though this affects their mentality to a significant degree. It is not even about their biographies almost always intersecting with Russia, about them having relatives, friends, and acquaintances there. It is about interests.

Just take the main pretender for victory – Ukrainian oligarch Petro Poroshenko. Some say that it is this candidate specifically that the Americans are pushing strongly, banking on his long-term loyalty. In response to that vote of confidence, Poroshenko has been actively criticizing Russia in the course of his election campaign.

Furthermore, a rather significant part of his business goes to markets in Belarus and Kazakhstan, which are members of the customs union with Russia and plan further integration with Moscow. There is also Kyrgyzstan, Tajikistan, and Armenia, which are candidates for entrance into the integrative union. Furthermore, Poroshenko had and still has business interests in Crimea – interests which, one way or another, are now located under the jurisdiction of Moscow. This is a fact that is impossible to ignore.

Can Poroshenko ignore all of these circumstances? Not likely. Indeed, Ukraine has never been the democracy that it wanted to show to the whole world it was. It will hardly become one now, since, in essence, what is happening in Kiev is a “reset” of the oligarchy, the traditional post-Soviet system of governance where all politics essentially boils down to oligarchs competing over spheres of influence. It is precisely this that Maidan protested so loudly against in part. But the opinion of Maidan does not interest anyone now, as the process of the new redistribution of what remains of the Ukrainian economy and resources has begun. Money and interests will decide everything.

The distinction from the previous period is that, since Maidan, Ukraine has become awash in weapons and the value of human life has dropped considerably, so now every self-respecting oligarch has his own personal army, turning him into something like an Afghan field commander. This will allow each to more effectively defend their interests in the course of the “reform” of the Ukrainian economy.

Poroshenko’s closest rival, the former Prime Minister Yulia Tymoshenko, has her own ‘romance’ with Russia. In fact, the battle between these two candidates, it seems, will become the central intrigue of May 25th – and the second round of elections if Poroshenko fails to win the first time around.

Some in Ukraine are of the opinion that Tymoshenko first became, at some point, one of the richest people in Ukraine specifically through gas contracts and other business projects with Russia, and only later became a leading political figure competing for many years for the post of president in this country. In general, the entire Ukrainian elite grew up on Russian money to some degree or another. Admittedly, this did not always occur at the behest of Russia or in accordance with its interests, but it would be inappropriate to skim over this fact.

Tymoshenko was long involved in a variety of joint Russian-Ukrainian business schemes. And it is well known that even though she was one of the leaders of the Orange Revolution of 2004, which was also carried out under the slogan of European integration, it was she, namely, who established quite constructive relations with Vladimir Putin. And it was Tymoshenko specifically who signed with Putin the very same gas deal that the current powers in Kiev are calling “unjust” and refuse to spend money on.

Meanwhile, the fact that Tymoshenko was essentially Maidan’s chief “icon” despite being the one who signed the “unfair” agreement with Russia is wholly characteristic of Ukrainian politics. The protesters demanded her release. The current Prime Minister, Arseniy Yatsenyuk, was her confidant. Even Europe was indignant. However, as soon as Tymoshenko was released, she started to interfere with the new victors, who are now actively pushing her out of big politics, offering her the role of honorable exhibit in the Ukrainian “Struggle for Freedom” virtual museum. In response, Tymoshenko is threatening to create a new “Maidan,” not seeing that such a thing could bury Ukrainian statehood, which is already splitting at the seams, for good. It is thus important to understand that this is the main characteristic of Ukrainian politics: There are no principles, only interests.

However, returning to Russia, it is necessary to add here that, for objective reasons, no Ukrainian president can effectively solve any of Ukraine’s internal or external problems without the establishment of normal relations with Moscow. There are a huge number of objective reasons for this besides the avarice and lack of principle of Ukrainian politicians. Moreover, having normal relations with Russia is a natural position for Ukraine which fits her strategic interests. For this basic reason, Ukrainian politicians haven’t the slightest chance of ignoring their past, present, or future ties with Russia, regardless of the fact that they are talking about it.

Sergei Mikheyev is director of the Political Environment Center of Russia