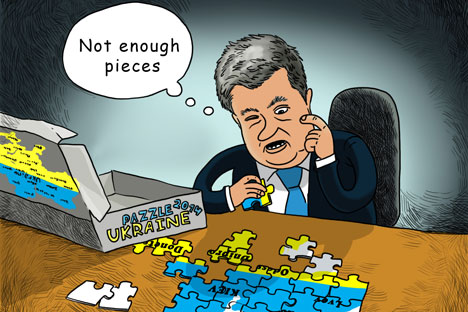 The election of Petro Poroshenko marks a watershed moment in the Ukrainian crisis. There are now clear opportunities for both Kiev and the self-proclaimed “people’s republics” in the east of the country to pave the way for rebuilding to begin. However, it is clear that any stable future for the country is conditional on the establishment of a rigid framework for ensuring the interests of all parties are taken into account.

The Ukrainian presidential election has established a new political reality in a large European country that has for the past six months been going through a most serious political crisis. The interim results of the "Euromaidan revolution" are paradoxical.

It has resulted in the collapse of the previous political system and in the loss of territory. But it has not generated new leaders and has not brought about a new political elite. Almost everything has collapsed, but the usual oligarchic backbone has survived.

Power is now officially in the hands of one of the most prominent representatives of big business, Petro Poroshenko. Other tycoons, like Dnipropetrovsk Region governor and billionaire Igor Kolomoisky, are some of the most influential players.

What lies ahead is a fight between financial and industrial tycoons for the country and its economy. The man heading the charge is the shadow master of Donbass, Rinat Akhmetov, who is yet to take on the self-proclaimed "people's republics" in Donetsk and Luhansk for his assets and status.

What are the characteristic features of the new status quo?

From a formal point of view, the legality of the election, which was not held everywhere in the country and took place in an atmosphere far from that of peace and tranquillity, could be brought into question.

The revolutionary drive is waning. People, tired of chaos and unpredictability, have expressed their preference for a respectable and sensible boss, who, it is believed, is capable of resolving issues. This is the only thing that can explain the first-round victory for billionaire Poroshenko, a pillar of the very system that was one of the targets of the Maidan uprising.

In the east of the country, there is a systematic opposition to the Ukrainian state machinery, which it is impossible to ignore and which it will hardly be possible to suppress. The Kiev authorities will have to look for forms of recognizing the rights and interests of those forces whom they currently describe as "terrorists".

Kiev and Donetsk are both at a crossroads

Petro Poroshenko has an opportunity to distance himself from the interim authorities' failed attempts to restore the country's territorial integrity, be it the loss of Crimea or the transformation of the southeast into a hotbed of civil war. He can end the "anti-terrorist operation" and change the rhetoric, with the nationalistic element, which was grist to the mill of the opponents of the new regime, taking a back seat.

Therefore, Kiev's opponents in the east should, as soon as possible, organize themselves into a responsible political force, capable of achieving a real, legislatively enshrined, decentralization. East Ukrainian federalists can count on Russia only in the capacity of pro-Russian forces inside Ukraine, but hardly as heads of some unrecognized entities. Moscow is not prepared to take either material or moral responsibility for them.

So where does Russia's vital interest lie? In taking part in building a new Ukraine to replace the state that had emerged after the breakup of the Soviet Union and failed to live through a period of political turmoil. Ukraine's participation in Western alliances is seen by Moscow as an unacceptable threat.

At the same time, the main trend in Ukrainian politics, especially after the loss of Crimea with its 1.5 million pro-Russian voters, will still be its focus towards the West. It is a reality that Russia cannot change. But if, once it has recovered from the shock, Ukraine's political system once again hits the same trajectory, a new serious conflict on a European scale is inevitable.

The only way out consists in institutional guarantees of neutrality, of Ukraine's provisional status. That will require a combination of external and internal levers. On the one hand, the so far chaotic movements of the southeast should be transformed into an effective pro-Russian force, which would become an influential player in Ukrainian politics.

Secondly, given how significant the Ukraine issue for European security as a whole is, the new decentralized design should be developed with the participation of all the interested outside players. Without agreement from Russia and the European Union locked into Ukraine's state system, nothing will work out anyway. This is fully appreciated by realistic politicians in the West, even by “friends” of Russia such as Zbigniew Brzezinski.

Ukraine's political culture envisages the possibility of instantly revising any agreement, so only a firm external framework can create the conditions to make sure that Ukraine does not yet again turn into a tinderbox for Russian-Western relations.

No parallels are ever quite appropriate, but Ukraine needs something along the lines of the Dayton Agreement on Bosnia that was signed in late 1995 between the sides in the civil war under pressure from the U.S. and Europe and with Russia's participation. This time, however, Russia should not just "participate" but be one of the main parties to the agreement.

In the case of Ukraine, there is no need for a formal protectorate like in Bosnia and Herzegovina, but there is a need for mechanisms that would ensure that all interests, external and internal, are taken into account and observed.

Now that the election has been a relative success and the West can breathe a sigh of relief, and while the "people's republics" still have the initiative on their side, Moscow should offer a serious deal to Europe and America. And the West would be very rash if, out of post-Cold War habit, it refuses to agree to compromises and tries to get it all.

The author is editor in chief of Russia in Global Politics magazine.