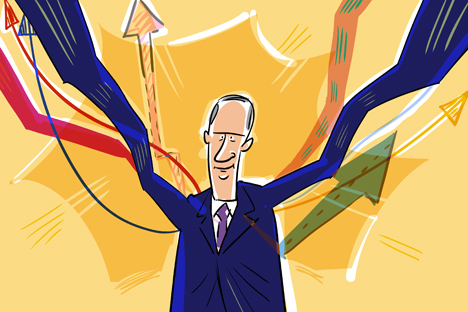 A recent opinion poll by the Levada Center indicates that amid tensions over Ukraine and the takeover of Crimea, Russian President Vladimir Putin’s popularity rating is at its highest point since 2010. Yet the events of this year have taken place against the background of an economic slowdown. Levada Center sociologist Denis Volkov believes that history shows that it is economics that Putin should be concerned about rather than foreign policy.

In the first several months of 2014, the number of Russians who approve of Putin's actions as president rose from 65 percent in January to 82 percent in late April. At the same time, the approval ratings of the government and the prime minister received a boost, as did Russians' readiness to vote for the ruling party and overall optimism.

Firstly, the president's rating rose by four points on Russia's performance in the Olympic Games. Russia's involvement in the events in Ukraine and the takeover of Crimea gave him a further 11 points. Additionally, Putin's televised phone-in with the nation, practically the whole of which was devoted to the situation in Crimea and Ukraine, allowed him to consolidate this success. It added a couple of more percentage points to the president's rating at a time when other ratings [the approval of the government and the prime minister, readiness to vote for the ruling party and overall optimism – Editor’s note] had already began to drop.

The takeover of Crimea gave the ratings a boost for several reasons. The threat of a military conflict always means that one has to choose between "us" and "them", which inevitably prompts people to rally around the leadership of their country.

The peninsula's "return" to Russia (as the president put it) is perceived by the majority of Russians not just as historical justice and as an alleviation of the ‘phantom’ pain for the lost status of "a great power", but as a noble act.

The opinion that Crimea should be returned to Russia and that the Russian leadership should defend the interests of Russians in former Soviet republics has been prevalent since the early 1990s.

An overwhelming majority of Russians are convinced that in Ukraine, Russia has extended a helping hand to the Russian-speaking population, has defended them from an inevitable death at the hand of "fascists" and "nationalists" who have come to power in Kiev, as this is what the country's main TV channels have been saying for months.

Moreover, in the opinion of the majority of Russians, Western governments are only hindering the resolution of the crisis, while pursuing their mercenary goals. "The Ukraine story" has been effectively presented to the Russian population in a very attractive light, and is essentially unrecognizable from the way it is presented outside Russia.

Finally, it matters too that, in the opinion of the majority of Russians, the annexation of Crimea and involvement in Ukrainian affairs has hardly cost Russia anything. The Crimea events took place with the loss of just one life; as for the Western sanctions, Russians do not really believe in them and cannot assess their consequences, since this is something that evening TV news broadcasts hardly ever mention.

While it is evening TV news (primarily on the three main state-owned channels) that provides 90 percent of Russians with their information on domestic and world events, the internet serves as the main source of news for 15-20 percent of the population, although there too the audience of independent and good-quality information resources that represent a variety of views and opinions make up just a fraction. An overwhelming majority of Russians do not have access to information that offers other than the official line.

This latest soaring of Putin's rating is not unique. A similar thing happened back in 1999, after the series of apartment block bombings in Moscow and the start of the second Chechen war (when Putin's approval rating rose from 31 to 80 percent in a matter of three months) and during the Russo-Georgian war in 2008, when in September his rating reached a record-breaking 88 percent.

However, alongside these major events, there have been dozens of smaller instances of mobilization (and media and propaganda campaigns), which inevitably served to boost the president's popularity: Take for instance, the scandal with the "bronze soldier" monument in Estonia, imports of poor-quality Polish meat, gas wars with Ukraine, espionage rows with the UK and the U.S., etc.

Any more or less significant foreign policy conflict has been used by Kremlin spin doctors to bolster the leader's rating. This, like the case with Crimea, demonstrates the huge capacity of the Russian political regime to adapt to the changing situation.

However, omitting details, the 15-year history of Putin's ratings (in the posts of president and prime minister) can be divided into two main periods: a period of growth (from 1999 to 2008, with a break in 2004), followed by a period of waning popularity.

It is important that the period of decline coincided with the economic crisis in Russia (2008-2011) and the subsequent period of stagnation [in 2014 the Ministry of Economic Development officially labeled it as such - Editor’s note]. Over 25 years of sociological observations make clear that it is economic problems (inflation, utility tariffs, unemployment, etc.) that are the principal cause for concern among the population.

Over a period of three years between 2008 and 2011, Putin lost about a third of his supporters. His rating was at its lowest in December 2011, when a wave of rallies with thousands of participants and protests against election fraud hit big Russian cities (at the time Putin enjoyed the support of 63 percent of Russians, with 36 percent not approving of his actions). Then his presidential campaign improved his rating for a while. However, after that, for some 18 months (till February 2014) Putin's rating stayed practically the same, fluctuating at about 65 percent.

The Crimea story has for a while improved the image that Russian politicians have in Russians' eyes but it has had no effect on the overall assessment of the economic situation. Despite the fact that satisfaction with the President and Government policy has grown, according to the last survey in May, only 38 percent of Russians believe that the government is capable of dealing with the situation in the economy, while 52 percent disagree (in February, the ratio was almost the same: 33 percent vs. 54 percent).

At the same time, 41 percent believe that Russia may see a repeat of the 2008 crisis, while 36 percent do not think this is likely. In other words, no situational mobilization of public opinion can change a long-term trend that has been established by the economy.

That is why Putin's further popularity as well as the stability of the political system as a whole will depend on how good or bad economic growth is.

Denis Volkov is a sociologist with Levada Center. The analysis is based on data provided by the independent pollster Levada Center.