Russia and the new Ukrainian leadership 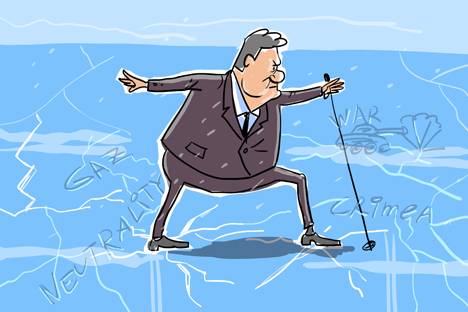 As a man of business who knows how to “resolve matters,” Ukrainian President Petro Poroshenko may try to find approaches to Moscow bypassing rhetoric and ideology.

Back in early May, it seemed that Moscow would reject the result of the Ukrainian presidential election. Russia kept stressing the legitimacy of Viktor Yanukovych, who was overthrown after bloodshed in Kiev, and therefore the illegitimacy of all further actions by the interim authorities in Kiev, including the announcement of the election. However, the Russian stance then began to soften. In the end, although Vladimir Putin has not congratulated Petro Poroshenko on his victory, Russian ambassador Mikhail Zurabov, who was recalled from Kiev in February, returned to Ukraine to attend the inauguration ceremony. This is, of course, a not particularly high level of representation but, given the circumstances and the continuing military operation in the east of the country, it is the most that was possible.

What does Russia expect from the new head of the neighbouring country? Russia's requirements as regards to Ukraine were outlined a long time ago and do not change: A decentralized state, which guarantees broad cultural, language and administrative rights of its eastern and south-eastern territories. And Ukraine's neutral status, guarantees that it will not join European and Euro-Atlantic structures. In the two months of fighting in the east of the country, it has become clear that Moscow is not interested in repeating the Crimea scenario anywhere else in Ukraine. Crimea is quite a unique case, both in terms of history and people's sentiments. And, incidentally, in terms of popular Russian attitude towards it: the belief that Crimea ended up as part of Ukraine by accident was widespread in Russian society throughout all the years since the breakup of the Soviet Union. In relation to Donbass, there have never been similar sentiments, although Russians do sympathize with the local population there.

Kiev is already full of rumours of Poroshenko's alleged plans for secret deals with the Kremlin. As a man of business who knows how to “resolve matters,” he indeed may try to find approaches to Moscow bypassing rhetoric and ideology. Although it would not be so easy to do from the point of view of the domestic political situation: despite having received quite a convincing mandate, the president does not have a political force of his own to rely on. The world of Ukrainian politics is made up of endless intrigues, brewing on money and change of positions.

One condition for Moscow's interaction with the new Ukrainian president is, of course, the cessation of the military operation to suppress pro-Russian rebels in the east of the country. Poroshenko can now change this course since, formally, he is not responsible for what the interim authorities have been doing. Although the future president has more than once expressed his full support for the tough measures, a change of position after coming to power is not an unusual thing in politics.

There can be no bargaining on Crimea, which Poroshenko has promised to return. Under no circumstances will Russia be discussing the issue of where Crimea belongs. If a general constructive dialogue is established, there can be a discussion of technical things: compensation and ownership issues. But this is not a topic to begin the interaction with, given the current level of mutual trust.

Russia has no intention of recognizing the “people's republics” in eastern Ukraine but, for obvious moral and political reasons, it cannot simply abandon them either. Moscow would like the resistance to the Kiev authorities to transform into a serious political force, but within Ukrainian politics. This, in fact, is what Poroshenko should be interested in too since there is a need for real players with whom to have the dialogue with the east.

A key topic for checking the two sides' ability to agree is the resolution of disagreements on gas, the issues of debts, transit, future gas price. It appears that Russia is ready to show more flexibility than previously, fully realizing that a new gas war would do serious damage to Gazprom. But first Ukraine should at least repay the old debts, which still remains a problem. Since Europe is eager to remove a possible interruption of supplies from the agenda, a compromise is possible. If a way out of the deadlock is found on gas, it will create at least some positive momentum.

Moscow is sceptical about Ukraine's prospects under any leadership since the political upheavals have not resulted in a change of political elite there and the quality of the previous elite is known to all. Yet, despite an extremely negative attitude to the events in Maidan and the coup in February, it appears that Russia would like to stabilize relations with Ukraine. An end to the civil war in the east that would allow all its participants to save face is the main condition for restoring a viable Ukraine. Here, everything will depend on Petro Poroshenko's first steps that will set the further direction of movement.