State has key role in development of renewable energy 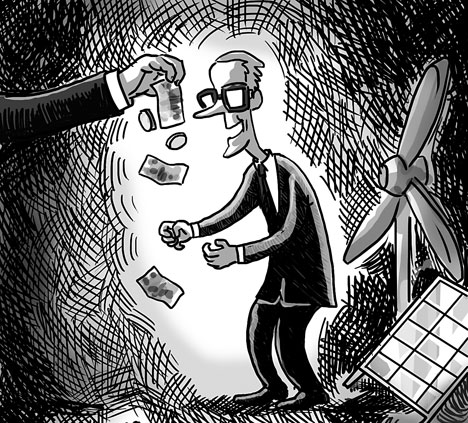 A 2013 analysis of the G20 countries showed that all of them, with the exception of Saudi Arabia and Russia, have made significant advancements in renewable energy capacity in recent years.

In the past decade, the world has seen a rapid increase in the use of renewable energy, including wind, solar, biomass, biofuels, and small hydroelectric power plants. This increase has been fueled by a number of factors, including the need to lower the impact on the environment and human health (particularly the need to reduce greenhouse gas emissions) and the need to reduce dependency on energy imports, especially since oil prices have risen to, and at times exceeded, $100 per barrel.

The United States, China, Germany, India, Brazil and Spain are the global leaders in clean energy. A 2013 analysis of the G20 countries showed that all of the G20 countries, with the exception of Saudi Arabia and Russia, have made significant advancements in renewable energy capacity in recent years.

According to different estimates, Russian wind power capacity is 13-15 megawatts (MW), comprising less than 0.005 percent of global wind power output. At the end of 2013, Russia’s largest solar power plant, with a capacity of 5 MW, began operating in Dagestan. This, however, is still only 0.005 percent of total global capacity.

Against this backdrop, experts sometimes raise the argument that Russia has large reserves of fossil fuels, and that it therefore has no need to develop renewable energy sources.

Yet international experience shows that this argument in untenable. The United States is one of the largest global producers of oil and natural gas, but it is comparable to China in terms of renewable energy use. In contrast, Norway, which is the largest producer of oil and gas in Europe, increased its wind power capacity from 13 MW in 2000 to 766 MW in 2013. Today Norway is working to increase that figure to 2 GW by 2020.

Saudi Arabia, which started working on its first 1 MW solar power plant in 2014, plans to spend more than $100 billion in order to increase solar plant capacity to 42 GW by 2032. These new sources of energy would provide up to 30 percent of the country’s electricity.

Azerbaijan is in the process of developing renewable energy sources as well, seeking to match the European Union standard of 20 percent in the overall energy balance by 2020.

Russia’s potential for renewable energy sources is great. Its traditional source is wood, and it uses an estimated 20-30 million cubic meters (70.6-105 million cubic yards per year). However, the use of wood and biomass to produce electricity is not widespread. There have been some successful projects that use biogas produced by processing industrial waste, but this renewable energy source’s potential is hardly being met on a national scale.

Children of Kaliningrad on the pursuit of renewable energy

The fact that several regions in Russia, such as the Kola Peninsula, Lake Baikal and the Altai are unmatched in terms of weather conditions for the development of wind energy resources stands in sharp contrast with Russia’s share of wind and solar power production.

The good news is that the authorities have started to pay attention to Russia’s need to develop the renewable energy sector. The federal law governing electricity adopted in 2003 contains measures to support the use of renewable energy by facilitating power grid connectivity, as well as obligations to purchase the energy produced by these power plants to compensate for grid losses. However, these measures have failed to bring about any significant positive changes.

In 2012 and 2014, the Russian government adopted several stimulus measures with more detailed and concrete targets for renewable energy development. According to these measures, wind capacity must increase from 100 MW in 2014 to 1 GW in 2020, which should ensure a total capacity of 3.6 GW for the period from 2014-2020. For solar power stations, capacity figures are set to increase from 120 MW in 2014 to 270 MW in 2020, providing a total capacity of 1.5 GW for 2014-2020. Government initiatives are also aimed at developing the use of biomass in the form of biogas, liquid biofuels and solid wood fuel.

Amid a lack of federal funding, grid companies that are obligated to purchase energy to compensate for losses will have to pay higher prices in order to ensure return on renewable energy projects. Grid companies clearly have other priorities for the funds they receive from end users (who, in turn, do not want to pay higher prices). It will soon become clear whether or not the establishment of target indicators will lead to significant changes.

There are many methods to support renewable energy development that have yielded significant results on a global scale over the past decade. In order to develop the use of renewable energy, it should be understood and acknowledged that past renewable energy initiatives in Russia have not been effective, and the country should start developing plans for further action. These plans should involve all interested parties, primarily the public and business representatives who work in the field of renewable energy.

Further bureaucratic experiments in this field will simply preserve the current state of affairs, in which Russian wind power plants (13-15 MW) lag far behind those in Honduras (120 MW).

Alexei Knizhnikov is the director of the Environmental Policy Program at the World Wildlife Fund Fuel and Energy Complex.

Alexei Grigoriev, a specialist at the Socio-Ecological Union International, also contributed to this text.