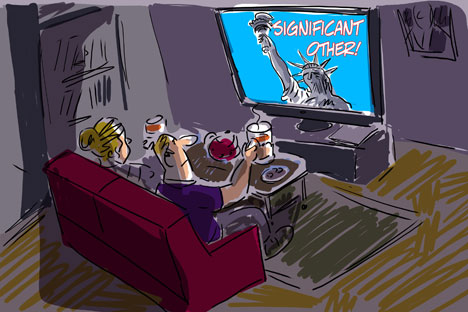 In the early 1990s, the US was seen as a model of capitalist success and an example to strive for. Now, anti-American sentiment in the country has never been higher. What has caused such a tectonic shift?

The United States of America has for many decades occupied a unique place in the Russian national psyche. For Russians, the U.S. is an ideal composite image of an enemy and at the same time an object of desire.

In recent months, there has been a hike in anti-American sentiments in Russia: Opinion polls by the Levada Center pollster showed that in May, Russians' dislike of America reached a historic high. Currently, 71 percent of Russians say that they do not like the U.S., whereas in the early 1990s, the figure was under 10 percent.

This is not surprising: In the late 1980s and early 1990s, when the USSR was just entering a period of liberal revolution under first Gorbachev and then Yeltsin. For Russia, the U.S. was an ideal, a model country and an example to follow. Our country was making generous gestures (in disarmament, in withdrawing troops from Europe, in declassifying military facilities and technologies) and, in general, was showing signs of being in love: Russia wanted to "return to the family of civilized nations", i.e. become part of the Western world led by the U.S.

However, it takes two to tango. But Russia and the U.S. could not tango because the latter was performing a completely different dance, the dance of the boxer. As a result, the United States replaced Russia in Eastern Europe (and not only there), having become the world's only superpower.

Furthermore, the liberal reforms that were aimed not only at bringing Russia closer to Western countries but also at transforming the country's political and business life were accompanied by a socio-economic disaster. Since it was the U.S. itself which was the embodiment of liberal ideals, disappointment with the reforms inevitably brought a disillusionment in America too.

That disillusionment was gradual. It first began at the level of the elites. Already by 1995, a considerable section of the Russian elite began to perceive the U.S. as a threat to security and order in Russia (which coincided with the first phase of NATO's eastward expansion and Russian GDP hitting rock bottom).

Still, at the time, that feeling was not yet being translated into politics. Moreover, since the people who were in power depended on the ideology that had brought them to power in the first place, the media continued to speak of "returning to the family of civilized nations.” As a result, anti-American sentiments among the general public, who were busy trying to survive and depended on information as presented in the media, lagged considerably behind similar sentiments among the elite.

This ambiguous situation had changed by the late 1990s, when two crises took place one after the other, undermining the foundations of the liberal revolution and preparing ground for a counterrevolution. The financial crisis of August 1998 shook the belief that liberal reforms would make people more prosperous. The Kosovo crisis and the NATO bombing of Belgrade in 1999 clearly showed that Russia's international standing had not at all improved; on the opposite, our country had lost the status of a superpower to be reckoned with.

What kind of relationship does Russia want with America?

That was when the conservative turn began. The frustration of the elites had finally reached such a degree that it spilt over to the TV screens. As a result, the message being broadcast by the media changed dramatically, and the anti-American sentiments of the general public began to approach those of the elites.

Any national ideology is based on confrontation: There must always be the other side, somebody alien.

America is an ideal alien. It is a far-away "alien" and fostering dislike toward it presents no threat to Russia's domestic politics. In addition, America is an ideal rival in the eyes of several generations of Russians who, like it or not, carry imperial ambitions. People born in Soviet times still remember the rivalry between the two superpowers, whereas people who became adults in the 2000s were already subject to a new ideology proposed by Vladimir Putin,  promoting pride in Russian history, including the Soviet period. That proved enough to turn the U.S. into an adversary in Russians' collective consciousness.

The new generation of Russian citizens have a stronger feeling of patriotism. The fact that at the time when their national feeling was formed it was the U.S. that happened to be "the significant other" in relation to whom Russia's place in the world was determined has resulted in that anti-Americanism becoming an integral part of that national feeling.

The younger generations of Russians, who grew up in the relatively prosperous 2000s, were at first quite relaxed about the U.S., all the more so since the role of "the significant other" was filled by immigrants. Yet any new crisis in international relations, one of which we are witnessing now over Ukraine, is serving to draw young Russians into the conventional rut of anti-Americanism.

The simple principle of Divide and Rule

As for the authorities, it is very convenient for them to have such an ideal enemy as the U.S. When the country is going through any difficulty, the authorities have to tell the public something that is easy to digest and that will consolidate society. In many cases, relying on the already fostered anti-Americanism is a very convenient option. If necessary, a real anti-American hysteria can be easily whipped up, drawing in the wider masses. Hence the record-high degree of anti-American sentiments as displayed by recent opinion polls.

Eduard Ponarin, PhD, is head of the laboratory of comparative sociological studies at the Higher School of Economics.

Editor's note:
The period of liberal revolution that the author writes about covers the political and economic reforms of perestroika in the USSR (1986-1991) under Gorbachev and a series of economic reforms carried out in Russia (1991-1994) under the Yeltsin-Gaidar government. The reforms were intended to replace the obsolete planned Soviet economy (which had remained in stagnation since the 1970s) with a market-economy model of the Western world. However, the reformers failed to take into consideration numerous aspects of the Soviet economy, which led Russia to a complete financial collapse in 1998. Inflation reached 200 percent a year and the country went into a technical default, which was followed by public disenchantment with liberal reforms.