Putin has stumbled in Ukraine 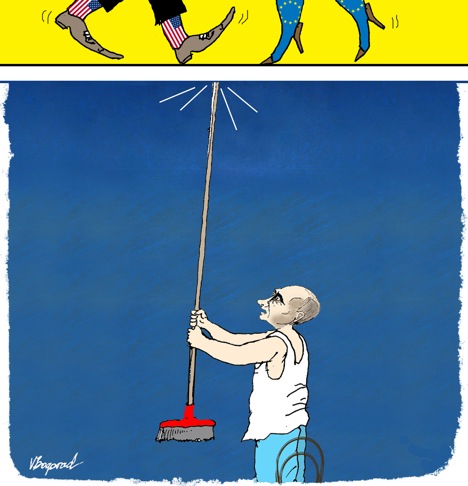 The fight for Ukraine, which began as a geopolitical squabble, has turned into a moment of decision about Russia's future path.

Fifteen years ago on Aug. 9, 1999, President Boris Yeltsin stunned Russia with his televised announcement of Vladimir Putin's appointment as prime minister, as well as his characterization of the new appointee as his successor.

Whatever the motivations behind this choice, it turned out to be the right one. It was a matter of honor for the second president to show his personal loyalty and fulfill his obligations to the first president.

But most importantly, after the upheavals of the 1980s and '90s, Putin was just the kind of leader people wanted: not brilliant, but dependable, capable of finally bringing the endless chaos to a close and ensuring the return of hope for the future. Putin, whom few initially considered an appropriate fit for politics, consolidated Russian society around the idea of stability.

Stability in the 2000s didn't mean stagnation or preservation (there wasn't anything at that point to preserve); it meant action. To achieve stability, it was necessary to take a series of measures to restore the management of the country, lay a foundation for economic development and give people a sense of purpose — not through a "big project" (not really Putin's forte), but through actively building and improving their own lives.

But Putin arrived under the banner of stability at the same time that stability was coming to an end in the world at large. He came to power at an uncertain time, against a backdrop of an eroding world order. This contradiction between internal goals and external conditions gradually became more and more apparent.

The West sees Russia's president as an enemy of progress, a symbol of outdated viewpoints and old-fashioned approaches. He, meanwhile, expresses his astonishment at the policies of leading nations, which seem to be almost intentionally adding fuel to the fire of international conflicts. Faith in the possibility of a "major deal" with the West, and Russia joining the circle of leading nations, has weakened, although Putin did see it as possible when he first took office.

But after Putin's return to power in 2012, he saw the West, primarily the United States, as the main destabilizing force in the world. This wasn't due to anti-Russian sentiment in Washington or Brussels (Putin considered that obvious in any case), but to the West's thoughtless and arrogant interference in one situation after another, destroying the foundations of national governance.

Many outside observers are sure that Putin is a cunning strategist, his actions governed by a larger idea: planned expansion, restoration of an empire, strengthening the so-called "power vertical," a return to the Soviet Union, anti-liberal measures, etc.

But he actually prefers to react, not lead the way. All his most decisive actions on the world stage have been reactions, frequently disproportional to the situation, with unforeseen consequences, but still in answer to an external event. The current crisis in Ukraine is no exception.

Until his third term, Putin was emphatically non-ideological; he was pragmatic, working to increase opportunities whenever possible while preserving freedom of action.

After his return he promoted an ideology of conservatism. This was probably a necessity. The president sensed the vulnerability of his country in the ungovernable global chaos and the absence of an agenda that would support Russia's national development. That is why he strives to simply maintain the status quo and protect against new upheavals. But if the stability of the 2000s was a conscious plan, stability in the current decade is a game of retention and preservation.

The escalating external turbulence has always worried Putin because it echoes and compounds internal disorder in Russia. This year has confirmed those fears; the coup in Ukraine was a greater challenge to Putin than any previous event and led to the end of a paradigm, with as yet unforeseeable consequences.

Putin has always favored an approach that scholars of international relations call realpolitik or a realist political thinking. The interaction of different nations is an endless struggle, a battle for influence and prestige. This is the norm. Stability comes from a balance of power; one party having an unequal advantage leads to tension and conflict. All must strive for balance, but realism means understanding the limits of what is acceptable and each party measuring its strength against its wishes, so as not to cause a consolidation of other nations against it.

Fifteen years ago, when Putin appeared at the top of the power structure, his task on the international stage was clear: restore the country's former position as a significant global player and raise its status in the international hierarchy. This became a recurring theme. By the end of last year, Moscow's influence had indeed grown. Putin's realism, his ability to set appropriate goals and achieve them with cold pragmatism, had borne fruit.

The annexation of Crimea in March was a risky, but calculated, move. Without a doubt, the main motives were to ensure the presence of the Russian fleet in the Black Sea and prevent Ukraine from joining NATO. This radical move to protect Russia's strategic interests and strengthen the country's position doesn't deviate far from the realistic spirit of all Putin's political actions.

However, the March 18 speech he gave in Crimea was definitely in the nationalist/romance genre as opposed to a work of realism. Putin appealed to Russians as a divided people, emphasizing national values. Bringing ideology into politics, especially romantic nationalism, commits a leader, tying his hands.

A pragmatist can react flexibly when circumstances change. But romantic rhetoric, even when used as an instrument, can't be so quickly cast off. It plays on the emotions, which can bring about a strong element of irrationalism, which is something Putin has always tried to avoid in his foreign policy.

Putin's departure from his usual realistic approach thrust Russia into a serious international crisis. The civil war in eastern Ukraine brought Moscow back from the global level to the local. Russia is now bogged down in an internecine conflict in a neighboring country with unclear goals and questionable methods. Most importantly, the end result of the internal conflict will not impact global politics on a large scale or the current global balance of power.

What we can take from this situation is that Russia is undergoing a crisis of purpose. The Soviet identity is definitively gone, and nothing convincing has emerged to replace it. No large-scale national development project, demand for which comes from the populace, has been proposed.

And the fight for Ukraine, which began as a geopolitical squabble, has turned into a moment of decision about Russia's future path. Putin has been successful in achieving the goals set 15 years ago. But today the time has come to achieve new goals, ones that have yet to be defined.