Russian Ambassador to the UK: A case study in the failure to learn from history 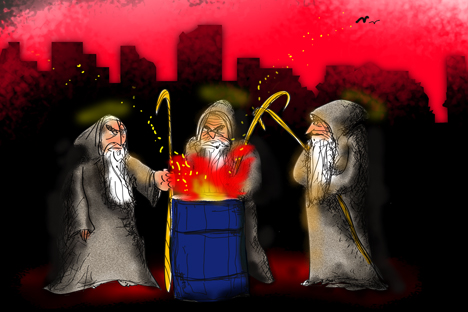 Alexander Yakovenko sees parallels to past events in the current crisis in Ukraine.

The Ukrainian crisis has two closely intertwined dimensions: a domestic one and an external one, both testifying to the failure to manage the process correctly. Both provide abundant material for a study in abject mismanagement, with the lessons of European history consigned to oblivion.

The crisis was launched in Brussels by the offer of the EU – Ukraine Association Agreement and its Deep and Comprehensive Free Trade Area. Nothing was thought through in advance, including how to finance a radical economic reform in Ukraine and the consequences for Ukraine-Russia trade and economic ties. Nothing was debated in public in the EU or Ukraine. It was a take-it-or-leave-it offer at odds with European traditions of pragmatism and moderate politics. But it was hatched by the Brussels supranational and unaccountable bureaucracy, which was carried away by temptations of grandeur and geopolitical self-assertion. For example, it took three months of the crisis for Brussels to admit that Russia has a legitimate economic interest in Ukraine.

But what is still denied is a far deeper and multifaceted relationship between Ukraine and Russia, including common historical, cultural, family and other ties. The slogan of a European future is not enough for sound practical policies, especially in a country as complex and large as Ukraine with an elite that over 23 years could not restore the size of its economy to the pre-independence level.

Domestically, the plan for the agreement triggered anti-government protests, which were fast taken over by armed radicals. As in any popular movement, resort to violence proved fatal. Violence begets violence and is no substitute for a reasoned public debate with the entire nation involved. Though President Viktor Yanukovich left the country, the fundamentals of the road map, agreed by the president and the three leaders of the parliamentary opposition through mediation, are as relevant now as six months ago. It is either “winner takes all” or a gradual process of building consensus in a society on where to go, how and at what pace.

This sequence and its logic were endorsed internationally in Geneva on April 17 and in Berlin on July 2. It provides for a national unity government, which would conduct an inclusive constitutional reform followed by elections. What is wrong with that? It’s the only option. That is where we stand in the resumed talks. Russia faced the same fork in the road when the coalition government of left-wing parties chose to disband the Constituent Assembly in 1918. The consequences were similar to those in England when Oliver Cromwell told the Rump Parliament: “In the name of God, go!”

Whatever the democratic aspirations of the original protest, once the issue of power was resolved, it was just a matter of time before the Maidan would go. The groups of radical nationalists, who espouse violence and define national identity in a negative way, ie, through the vilification of other nations as proved by the latest tensions between the authorities and the Right Sector, are more difficult to push aside. The old elite has been co-opted into this simple fix of suppression by force of arms by those who disagree and want to be heard. To make things easier they were labelled terrorists. The bet on a military solution, of course, prolongs the life of the existing parliament. And no reform is on the horizon.

It is sad that the US and EU have chosen to render uncritical support to Kiev, juggling the notions of sovereignty and territorial integrity as opposed to the real needs and aspirations of people on the ground. As some believe, that makes it tempting for Kiev to get into a military conflict with Russia. The crisis already acquired a broader scale because of Western sanctions against Russia, a sort of middle ground between war and peace. This still means war, although an economic one, but as destructive and inconclusive as a real one. This brings us to uncharted territory, with all the uncertainties and unpredictability involved.

On the part of the West there has been constant talk of reform of the constitution, decentralisation, protection of minority rights and a genuine national dialogue (most recently in the EU Council’s Conclusions on Ukraine on August 15). But that is talk against the backdrop of facts on the ground that deny all those good intentions. It is only now, in anticipation of the government forces’ victory, that this reality has started to dawn on some in the West.

Edward Lucas wrote in The Times on August 12 that the West is facing a prospect of “bankrolling indefinitely a failing state run by corrupt politicians, oligarchs and paramilitary thugs”. Is it really the outcome we all want? For sure, it will be sealed by a military victory, with Russia unable to bankroll such a state in any way. Our public opinion simply won’t allow it. If the West has a stomach for a Cold-War type of geopolitical dependency (the “our son of a bitch” approach’’), it will have it. There is another option, which is still possible, ie, truly collective outside involvement in Ukraine’s transformation on a realistic basis, perhaps under the auspices of the Contact Group.

And finally, it is obvious that the politics of double standards and the spectacular display of indifference towards the plight of civilians in eastern Ukraine, presumably as less human, than, let’s say, the Palestinians, will have a lasting impact on Russian perception of the West. As if association with Nazism, which was a pure product of Western culture, wouldn’t suffice. It will make a bad situation worse: such a such foray into the old geopolitics will have consequences for the EU’s future and that of Europe in a new global environment.

As to the world order, there never was a formal settlement after the end of the Cold War. Russia has consistently called for the establishment of a modern security architecture on the continent, including through the proper institutionalisation of the Organisation for Security and Co-operation in Europe. The West has preferred constructive ambiguity because it gave it the unfair advantage of a majority which is always in the right. Russia continued to be contained.