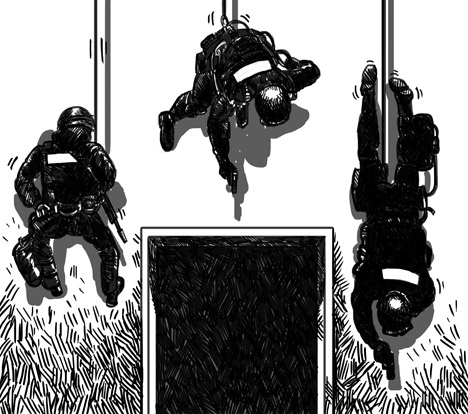 A decade after the Beslan hostage crisis that claimed 334 lives, terrorism is turning from a clear into a potential threat.

Ten years have passed since the most horrific terrorist attack in modern Russian history, when 1,100 people were taken hostage in a school in the North Ossetian town of Beslan. In the special operation to end the siege, 334 hostages were killed, most of them children. These days, a terrorist attack on that scale seems impossible in Russia. However, it does not mean that terrorism is no longer a threat; rather, it has transformed and is turning from a clear into a potential threat.

A clear threat of terrorism as represented by Chechen, Dagestani and Ingush militants is no longer considered to be the main one. This is recognized both by the general public (according to the VTsIOM pollster, the issue of terrorism presents a concern for 13 percent of Russians, which is 2 percent less than last year and 75 percent less than in 2004, when 88 percent of respondents - an absolute maximum since polls were first conducted - viewed terrorism as the country's main problem) and experts.

Nine years after Beslan tragedy: What are the children thinking now?

“Terrorist activity in the North Caucasus in 2014 has been down,” expert in Caucasus studies Nikolai Silayev told RIR. “There are several reasons for that. In recent years, security services have stepped up pressure on the terrorist underground, many militants have been killed or detained. The special services were particularly active ahead of the Sochi Olympics (according to Federal Security Service director Alexander Bortnikov, in the first six months of the year 130 militants were killed, including 21 ringleaders; over 160 rebel hideouts and arms caches were found and destroyed).” He added that the work of special commissions that hold talks with rebels seeking to convince them to give up fighting and return to peaceful life has also been useful. “Finally, many of the most zealous militants have gone to fight in Syria or Iraq,” Bortinkov said.

Tensions are further reduced through the efforts of some of the regional leaders, who are trying to better integrate their societies into Russia. For example, Chechen leader Ramzan Kadyrov is doing his best to demonstrate his involvement in Russian national ideas. In particular, he is taking an active part in sending humanitarian aid to the Donbass, secures the release of Russian journalists detained by the Kiev authorities and promises to allocate funds for Crimea's economic development.

However, despite the gradual stabilization of the situation in the North Caucasus, there are factors that could once again create tension there and raise the level of the terrorist threat. The Russian secret services are concerned that Georgia will continue to pursue a policy of destabilizing the North Caucasus, which it carried out under President Mikheil Saakashvili, as an asymmetric response to Russia for the effective secession of the republics of Abkhazia and South Ossetia. Some Russian political scientists, however, think that this threat is exaggerated. “Indeed, a large part of the infrastructure of Mikheil Saakashvili's 'new North Caucasus policy' remains in Georgia still. However, the border from our side is secure. Besides, Tbilisi does not have either the resources or the desire to destabilize the North Caucasus,” said Nikolai Silayev. “The current Georgian authorities, having opted to bring relations with Moscow back to normal, are in fact helping Russia in countering the terrorist threat and have provided a certain assistance in ensuring the security of the Sochi Olympics.”

A far more serious threat is coming from the Middle East, where there are Russians fighting among Islamic State militants. Moscow is concerned that these people may return to Russia and apply their skills and experience to destabilizing the situation here, especially in the North Caucasus, Tatarstan and Crimea. Some pundits, however, explain that the threat of Middle East terrorism does not really target Russia proper as its interests in Central Asia. “There are relatively few Russians among foreign jihadists fighting in the Middle East, some 400-600 people. If for Russia, which has strong secret services and considerable resources, the potential threat from mercenaries fighting in Iraq and Syria is relatively low, for Central Asian countries, where the authorities have still not been able to eliminate the Islamist underground, it may become fatal,” said Leonid Isayev , an expert in Arabic studies.

In turn, a sharp Islamization and destabilization of Central Asia may radicalize Russia's Muslim community and prompt terrorists trained in Central Asia to come into Russia (especially since Russia has visa-free travel with those countries).

Finally, a serious threat is presented by a further radicalization of the situation in Ukraine, where the ongoing “political, nationalistic processes are seriously affecting the security situation in regions of three federal districts. All the federal districts face the problems of terrorist threat, arms trafficking, uncontrolled immigration,” said Russian Prosecutor-General Yuri Chayka. The Ukrainian state is delegating part of its right to violence to numerous ‘private armies’ in the form of volunteer battalions. In addition, there are several paramilitary groups, like the Right Sector, operating in Ukraine. All those non-state structures “starting from late last year, have been viewing Russia as their enemy, all but calling for occupying its border territories,” said the head of the Moscow human rights bureau, Alexander Brod.

Therefore it cannot be ruled out that even if Petro Poroshenko reaches a peace agreement with the pro-autonomy militia in the Donbass, irregular pro-government units will refuse to comply with it and will continue the war. Their knowledge of Russian and visa-free travel will allow them to infiltrate into Russia. Furthermore, radicals have now gained access to extremely dangerous weapons and materials as the Ukrainian cabinet of ministers has expanded the list of special cargoes to be guarded by fighters from the National Guard to include carrier rockets and nuclear materials, including spent nuclear fuel.

Overall, the threats emanating from the Middle East and Ukraine are so far more potential than real and Russia still has enough time to reduce them. The best option would be, of course, to cooperate with the US and Europe, for whom the Islamization of Central Asia presents a serious threat (as it would put an end to their plans for exporting Central Asian hydrocarbons into Europe). However, given the current status of our relations, any fruitful cooperation at the moment is unlikely. Which is a pity, as there have been many successes in the history of cooperation between the Russian and Western secret services.