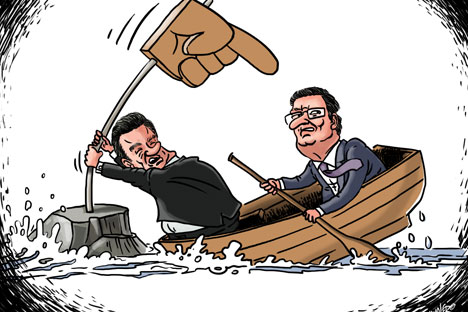 The Ukrainian conflict has brought about a collision of interests between Russia and the West that is being exacerbated by the drastically different approaches of the two sides, writes Fyodor Lukyanov. To talk of a “point of no return” is unconstructive and ignores the complex reality of international negotiations and conflict resolution, he argues.

The deterioration of the situation on the eastern Ukrainian front has sparked a new series of tough recriminations directed at Russia. The words of the President of the European Commission Jose Manuel Barroso and President of Ukraine Petro Poroshenko stand out: They say conditions are nearing the “point of no return” and that Moscow must stop if it does not want to end up “on the other side.”

These statements are very characteristic, and reflect not only the confrontation over Ukraine, but in general the type of political thought currently dominant in the West.

Contemporary world politics saw its beginning 25 years ago with the conviction that the “end of history” had dawned. Even the author of this snappy aphorism, the American scholar Francis Fukuyama, has long since repudiated it, recognizing the error of his former point of view. However, it is essentially this idea that has determined the actions of the U.S. and other leading countries of the Western world since the end of the USSR and the socialist bloc.

In practical terms this has meant that diplomacy in its customary form – the search for solutions acceptable to all sides – is no longer necessary, as there are some ‘right’ rather than contractual decisions that are based on the values and viewpoints of the West, the political, historical, moral, economic, and other correctness of which were proven in its confrontation with the Soviet Union.

Such an approach, naturally, is hardly shared by all, and it has been necessary to use force to implement it in real life – not always military force (although that has happened), but invariably political and economic, as well as informational. The result has been ever less convincing, but this is almost never reflected in the actual approach.

The Ukrainian crisis has led to a direct conflict of interests between Russia and the West. The contradictions have been growing for a long time and it is enough to recall the fundamental disagreement over Syria. However, even there the positions of the two sides did not openly diverge too far. But a method that does not provide for serious discussions with partners, but is based on having to accept Western conditions for the resolution of problems, does not work when a power like Russia is on the other side of the table, a power that does not submit to pressure as a matter of principle and is able to issue a powerful response to sanctions levied against it.

The “point of no return” apparently signifies a moment beyond which all negotiations and all alignment of interests cease and retributions begin. However, there have not been any truly serious negotiations over the Ukrainian question, if by negotiations is meant the desire to find a compromise. And concerning retributions, the devaluation of words and concepts is yet another paradox that has arisen since the Cold War. Last year’s story of the “red line” that Barack Obama drew for Syrian leader Bashar al-Assad is symbolic. Damascus was given an ultimatum but no one expected it to be followed through. And when a situation was created in which threats had to be carried out, there was neither the will nor the desire, because military action was obviously pointless.

NATO is an even more striking example. The alliance accepted new members and gave them security guarantees, honestly believing that it would never be necessary to back them. Since 1991, the paradox of NATO is that its very preservation and expansion has caused increasing concern for its opponents (not only Russia but also China, for example) while the bloc has simultaneously psychologically distanced itself from the possibility of entering into a major confrontation.

NATO’s assurances about the alliance not being configured for traditional military purposes were not believed by those to whom they were directed; though they were believed by the member nations themselves, for whom it is now very difficult to readjust. This gives rise to additional internal disorder – Central and Eastern Europe simply do not trust the allies, fearing that they will fail to fulfill their promises in a moment of crisis.

How should the ‘point of no return’ be understood in the mouths of, for example, Barroso – as a severing of contact between the European Union and Russia? Well, it is objectively impossible. No one is willing to try. Of course, the sanctions funnel is sucking and the spiral of responses to responses is becoming self-perpetuating. The logic of retribution is gradually replacing any rational calculations – economic or political. However, there can be no ‘point of no return’, just like there is no ‘end of history’.

Everyone agrees that the Ukrainian conflict has no military solution. But, unfortunately, in confrontations of this type, the military component is integral because in the end, after all possibilities for military victory have been exhausted, the sides will finally sit down at the table for serious negotiations - where there is no ‘point of no return’, since world politics is no chess match in which one can take and win, but an endless process of seeking balance.

This may be ever elusive, but the process itself of searching for this is capable of bringing some calm, if at least temporarily.