Why linguistic nuance is often the first casualty of media reporting 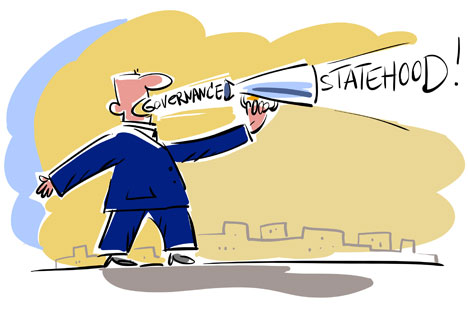 Language is fundamental when it comes to international diplomacy and information sharing. A slightly incorrect translation can change the way one country views another; a single misrepresentation of a concept can have drastic effects on negotiations and heavily distort international perception. Sergei Tseytlin looks at how various interpretations of a comment made by Vladimir Putin have played a role in shaping debate over Ukraine last week.

On Sunday, August 31, Russian President Vladimir Putin gave an interview on Russian television about the crisis in southeast Ukraine. Part of his response included the following sentence: “We must immediately begin substantive, meaningful negotiations, not on technical questions, but about the political organization of society and the gosudarstvennost of Ukraine’s southeast for the unconditional securing of the legal interests of the people who live there.” The word in italics was left untranslated intentionally.

The Russian word gosudarstvennost (государственность) was translated by practically all English-language media as "statehood." The translation is not entirely incorrect in itself, but it is not precise, especially in the context in which Putin used the word, and therefore proved to be misleading.

In Russian, therefore, the word gosudarstvennost can be interpreted in two ways: the organization of a government, its effectiveness or viability, in short, governance; or the organization of a state/nation, its systematization - its statehood. In fact, the double meaning of this word even prompted Russian journalists to ask the Kremlin to clarify the statement.

Presidential Spokesman Dmitry Peskov then explained that Putin was not talking about the statehood of southeastern Ukraine, but about inclusive negotiations that would involve all parties in the conflict, that would take into consideration everyone's interests and that would lead to order and the stabilization of the region, something that Putin had already discussed with Ukrainian President Petro Poroshenko as part of what he said had to be a peaceful solution to the crisis.

However, English-language media chose the ‘statehood’ translation of the word gosudarstvennost, not ‘governance’ or ‘governmental organization’. Statehood means the status of being recognized as an independent nation, and thus, by using the term to translate Putin's message, the media conveyed the possibility that the Russian president was supporting  independence for the Donbass.

The New York Times called Putin's expression "a vague and provocative turn of phrase." But if it were meant to be vague and provocative, why would the presidential spokesman immediately clarify the issue, saying Putin did not mean statehood in the sense of an independent state?

Misunderstandings are common when information must be translated from one language to another. Surely the ‘Donbass statehood’ issue is not the first case of a western misreading of a Russian statement, and the Russian media, like everyone else, also has its inexact interpretations. In fact, for the media itself this is not such a major problem. Little slips like this will not have any effect on the publication's image, readership or financing.

It is the end user, the seeker of accurate and untainted information, who has to bear the brunt of the inexactness. It is the reader seeking true knowledge - he will have to settle for a half-truth, for an incomplete understanding of the given fact. Does there exist an objective, impartial and completely faithful source of information, he will ask? Where can we find out what our neighbor really said, what was really implied?

This is one of the biggest challenges still facing us today.

Sergei Tseytlin is a freelance translator who also works for RBTH. Sergei Tseytlin was born in Moscow and grew up in New York. He has been living in Italy for last 16 years - first in Milan, then in Venice, and now he lives in Rome. His stories and essays have been published in magazines in London, Moscow and Venice. His collection of tales "The Venetian Notebook and Other Stories" and his novel "Bragadin" have been published in Italy.