How it feels to lose your country 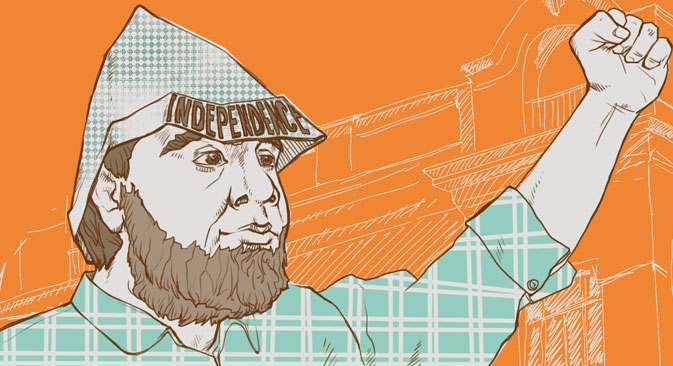 People who grew up as Soviet citizens know what it means to lose their sense of identity.

Click to enlarge the image drawing by Natalia Mikhaylenko

Shortly the United Kingdom as the world has known it for 300 years may cease to exist. Or it may live to see another day. Everything turns on the result of Thursday’s independence referendum in Scotland.

No stone was left unturned by the “yes” and “no” campaigns regarding the “pros” and “cons” of Scottish independence. Everything from the pound to nuclear subs to the NHS has been debated and scrutinised in Scotland. But, for many in the rest of the UK, what may matter most is the feeling of a loss of something that has been with you all your life and that you have taken for granted – your country.

I for one would have the dubious privilege of going through this twice in my life. My family settled in Britain soon after the collapse of the Soviet Union, so the United Kingdom has been our home for the past 21 years. I still remember the trauma and anguish of my fellow Soviet countrymen. Unlike in the UK, there was no “yes” and “no” campaigns, no debate, no weighing of “pros” and “cons”.

In December 1991, Boris Yeltsin, the leader of Russia, a constituent republic of the Soviet Union travelled to a hunting lodge in a forest in Belarus and agreed with the leaders of Ukraine and Belarus to dissolve the Soviet Union. Leaders of other constituent parts of the Soviet Union, and there were many, especially if you count republics within republics, were kept in the dark. At the time the world applauded the quick and peaceful demise of what many in the world saw as a monster. But how did it feel on the ground?

The place was bitterly cold, blindingly white from pristine snow, and eerily barren of people. This was the railway station of Chop on the Hungarian-Soviet border. It was January 3, 1992 and we were returning from Christmas and New Year holidays in Prague. When we had crossed the border on the outbound journey just a week earlier the place had been teeming with immigration officers and small time traders peddling snacks and souvenirs. This time no one came to our train. Then it dawned on us: there was no Soviet border any more. It was now the Ukrainian border. Only there were no Ukrainian authorities in place yet. We left the Soviet Union but returned to the Commonwealth of Independent States. Fellow passengers appeared shocked and bewildered, and this sense of confusion did not leave them all the way to Moscow. Some Russians feel bewildered to this day.

That summer of 1992 we sent our nine year old son to relatives in Crimea. He’d been to Ukraine many summers before, either to our relatives in Sevastopol or Kharkov.

But this time he needed a lot of legal paperwork to be able to cross the border. The border cut across almost every family in Russia and Ukraine. There was a feeling of unreality, of something of a bad dream at a Moscow railway station with passengers on the train to Sevastopol frantically checking if they had the proper documents to enter Crimea. My father in law was born in Crimea when it was still Russian, his brother and sister had been living in Crimea all their lives. To them it did not matter if it was in Russia or Ukraine, after Khrushchev donated it to Kiev to mark 300 years of the Russian-Ukrainian “eternal” union in 1954, the year I was born.

Just like England and Scotland, Russia and Ukraine had been together for over 300 years, since the 1654 Treaty of Pereyaslav united the two lands. But unlike the English and the Scots, the Russians and Ukrainians belong to the same ethnic and linguistic group, and many believe they are actually one people. The people on both sides of the Russian-Ukrainian border speak the same language which is neither Ukrainian nor pure Russian – it’s a colourful mix of the two.

The demise of the Soviet Union started in 1989 with the so-called “parade of sovereignties”.  After the Baltic states declared the priority of their laws over those of the Union in 1988-1989, other constituent republics followed suit. Russia declared its sovereignty in June 1990, Ukraine a month later. But unlike the Baltic and Caucasian states who sought full independence, the two biggest members of the Union seemed to be content with transforming it into an analogue of the European Union. But once let out of the bottle, the genie of separation took on a life of its own.

Why Russia will not forget the Iron Lady

In June 1990, while working for Gosteleradio, a pan-Soviet TV and radio broadcaster, I was sent to Kiev to cover Prime Minister Margaret Thatcher’s visit. The excitement at the Ukrainian press centre was palpable. The famous “Iron Lady” was coming to Kiev, not to Moscow! However, I soon found out that not everyone was welcome. An official of the nascent Ukrainian Foreign Ministry told me sternly that they don’t accredit “Muscovites” (a derogatory description of Russians). So I, a Soviet journalist,  ended up being accredited by … the British Embassy (it was being set up even before Ukraine adopted the Declaration of Sovereignty)!  Soon, Gosteleradio was no more. Just like all the other pan-USSR bodies, it was broken up and disappeared into the ether.

There was an attempt to turn this slide towards a total break-up into an orderly process. For the first time ever, a referendum was held on the future of the Soviet Union. On March 17, 1991, citizens of the country were asked if they supported “the preservation of the Union of Soviet Socialist Republics as a renewed federation of equal sovereign republics in which the rights and freedom of an individual of any nationality will be fully guaranteed?”

The turnout was 80 per cent and the “yes” vote was 70 per cent. The Baltic and Caucasian states as well as Moldova boycotted the referendum but the autonomous entities within Georgia and Moldova -  Abkhazia, South Ossetia, Transnistria and Gagauzia - did take part and overwhelmingly supported the preservation of the Union. This later led to armed conflicts when the authorities in those republics tried to suppress the “separatists” who insisted on respecting their vote. The tragic repercussions of those conflicts are being felt to this day.

After the referendum on the future of the USSR there was a lot of maneuvering among the elites of the Union and of the constituent republics who tried to haggle the best deal for themselves in the new Union.

It all came to a head on my birthday, 19 August 1991, when a coup in Moscow tried to stop the signing of a new Union Treaty. The world saw dramatic images of Muscovites standing up to tanks and paratroopers. I happened to be in Yalta at the time, and people there were completely oblivious to what was going on in Moscow or nearby Foros where Mikhail Gorbachev was under house arrest. This knee-jerk reaction by those who wanted to “save” the USSR had dealt the Union the deadly blow.

It took a long while for Russians and Ukrainians to come to terms with living in separate countries. For at least a decade after the break-up, on my trips to Kiev my Russian roubles would be accepted at local shops. And Ukrainian farmers kept their market stalls in Moscow and in other Russian cities. The Russian language continued to be widely used in Ukraine. Who would have predicted that it would come to this? Alas, the logic of a divorce after an extremely long marriage is hard to see and understand. After all, it is the emotion that takes over after the paperwork is signed.