Russia gains new purpose from battle against the West 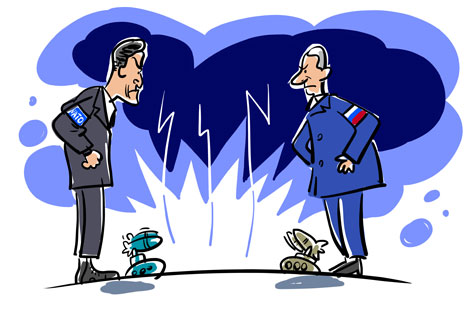 It is commonly held that events in Ukraine have breathed new life into NATO, reinvigorating it with a sense of external threat. But the flip side of that is also true.

In its haste to reassure doubting member states of the inviolability of NATO security guarantees, the alliance's rhetoric has also given the Kremlin exactly what it was lacking in recent years: help in building a picture of national development.

In the earlier stages of Vladimir Putin's presidency, his objective was clear: restore control over the country and ensure an economic recovery. And toward that end, there seemed to be no alternative but to empower the federal authorities to receive and distribute the country's income.

But by 2008, when former President Dmitry Medvedev began his term in office, the advances made in simply rebounding from the economic mayhem of the 1990s were exhausted. Russia lacked a model for further development. What's more, all of the dreams and talk of modernization and innovation turned out to be empty rhetoric.

Once Putin returned to the presidency, the public expected him to clarify the country's political and economic course. The lively debate about a "national identity" that emerged soon after his third term began indicated that Russia was in search of a new path.

The search was troubled, though, by a lack of viable models. Remnants of the Soviet model that had influenced Russian politics long after 1991 had fallen out of favour.

Simultaneously, attempts to adapt a version of the modern Western model to the Russian reality led not to national development, but to a discrediting of the proposed approaches. At the very time Russia most wanted to find bedrock, the global system began rapidly crumbling all around it, starting with the financial crisis of 2008.

NATO's perceived threat, however, allows Russia to reassess and recalibrate the choices it made immediately after the Cold War's end, giving the Kremlin an opportunity to build a new foundation for national development.

The confrontation between the West and the Soviet Union ended in the late 1980s at the initiative of the Soviet Union, after Mikhail Gorbachev declared that Moscow would renounce its "special path" and commit to "universal values."

The state later went even further by announcing its willingness to forego any delineation of each side's sphere of geopolitical influence, eventually ceding the majority of Eastern Europe to NATO control. Gorbachev's approach will long be remembered as the most outstanding example of political idealism — as will the consequences that followed.

Evaluations of that period in modern Russian history vary, but generally tend to fall into two negative interpretations. According to the first, Gorbachev and his henchmen betrayed the Soviet Union, deliberately bringing down a great state.

According to the second, Gorbachev was incredibly naive and unsuited for his office. This view implies that the decision was an error that, ideally, leaders would have corrected by returning the country to that fork in the road and simply taking the other path.

But importantly, neither theory shows support for a return to the Soviet past. This is because many government agencies, including the KGB for which Putin worked at the time, saw very well that the Soviet system in place in the mid-1980s was doomed to fail.

The question was: How to change the system and attain a new level of development? The choice was made in favour of ending the country's ideological, political and economic isolation and embracing greater openness in any form, but especially ideological.

From the late Soviet period until today, some have believed that the Soviet Union should have progressed along a different path — that is, by opening up only as leaders determined necessary.

The clearest expression of this view was the debate in the 1990s over whether Russia could follow the "Chinese path" — an option that many communists advocated. The liberal response usually argued that China began its reforms when that country was at the stage of industrialization and urbanization, stages that the Soviet Union had passed through in the 1930s.

Therefore, they argued, the Soviet society of the 1980s would not accept an approach that worked at that time in China. However, that thinking also did not address a different issue — namely, that a country must create the economic preconditions for liberalization before it can implement political reforms.

Today, although the "Chinese path" is off the table, Russian leaders still have a strong desire to somehow correct Gorbachev's decision, which they believe led this country into a dead end. And the thing that everyone can agree on, from the ultra-left to the ultra-right, is that Russia needs self-sufficient modernization more than it needs Gorbachev style accommodation with the West.

Two factors — one internal, the other external — have led to this confluence of opinion. First, Russian leaders across the spectrum have exhausted their ideas for developing the country and have reverted to trying to resurrect familiar and time-tested goals. Second, the chaotic world order is destroying not only everything inherited from previous ages, but also the principles guiding the new epoch — in particular, the continuity and integrity of the global economy.

The current bacchanalia of mutual sanctions provoked by the Ukrainian crisis is a vivid example of how the political interests of individual countries are beginning to grossly interfere with market processes even though the previously prevailing belief was that, in principle, economic considerations take precedence over bureaucratic warfare. Sanctions have thus given an additional boost to the Russian leadership's proposal to "de-couple" from the previous Western model of development.

Against this backdrop, the "collapse" of globalization — an eventuality that most believed, until recently, would be certainly fatal — might now seem like a natural reaction to events.

It is impossible to repeat history, but certain cycles can play out more than once. Russia and the West ultimately failed to find a common language following the Cold War and so, tired of the hypocrisy, both sides have returned to more familiar and simpler modes of behaviour. It will take some time before it becomes clear if the past is really gone forever.