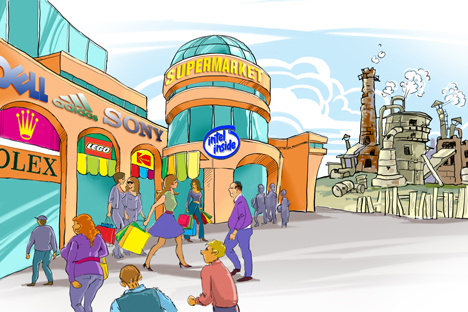 Mutual sanctions are always extremely unpleasant, and the application of sanctions and the “hot” trade war between Russia, Europe and the United States can have no good result.

Today the world is going through a global systemic crisis comparable to the crises of the 1930s and 1970s. This is a very difficult situation that could aggravate the economic picture in Russia and Europe. However, the sanctions were not a precursor to Russia and Europe’s economic problems, as they arose much earlier. Rather, the sanctions are a consequence of the crisis.

The European economy has been characterized by low or zero growth in recent years, and in turn Russia is balanced on the verge of recession. There is no recession in Russia yet, but there is a significant slowdown, for which there are several reasons. Firstly, many of the countries in the European Union - Russia’s main trading partner, accounting for more than 50% of turnover - have experienced recession, and it would be strange to see rapid growth in Russia.

Secondly, there are cyclical reasons: reduced investment activity by major corporations in 2012-2013, especially by state-owned corporations, and the investment cycle (for example, preparation for the Sochi Olympics). Thirdly, by 2008, the reserve of restorative growth had been exhausted. But in 2009, owing to the crisis, there was a significant decline in the economy, followed by a recovery which, for a short time, supported moderate economic growth.

But the main reason for the economic growth slowdown is that the economic growth model for the 2000s, with its steady expansion in demand, has been exhausted. This is due to external circumstances, since oil prices stopped rising, as well as for internal reasons. Some economists call this the middle-income trap. Russia has become a country with high labor costs and relatively poor economic institutions, one of the indicators used in the World Bank’s Doing Business survey.

According to per capita GDP dynamics, in recent years Russia has risen to the lower level of the developed countries, while the quality of its institutions has remained at the developing-country level. To date, this is the main structural problem in the Russian economy and it doesn’t have an easy solution. Businesses are willing to put up with relatively weak institutions in a low-cost environment or pay more when guarantees are provided by strong institutions. However, a combination of bad institutions with expensive labor is undesirable for entrepreneurs, and does not encourage investment.

Economists spoke of this problem long ago. From an economic point of view, the change needed is simple: we need to transition from a demand economy to a supply economy – with economic stability and predictable rules of the game, available credit (which requires low inflation), and taxes acceptable to stimulate the development of production.

Economic development is not straightforward. In the face of rising political tensions caused by the situation in Ukraine, part of the Russian political elite is beginning to rely on the mobilization of our society’s potential. Meanwhile, in today’s world it is very important not to impose further sanctions on ourselves.

A much more effective response might be economic liberalization, which would provide the necessary modernization for institutional growth. This was the path that China took when faced with international sanctions following Tiananmen Square. Against this backdrop, China decisively strengthened economic reforms. And soon after, in 1992, the country experienced an investment boom.

To all this we must add another structural problem: the need to modernize the welfare state. In particular, this means education, health care and pensions. In Russia, the welfare state was created in the industrial era and adapted to its needs. A person had to learn and practise one specialty, and life expectancy was below retirement age. Now the situation is different. To succeed in the labor market, a person should learn throughout his life and do different things. One visits the doctor not only out of necessity, but preventatively, creating a different burden on the health care system.

In solving all of these problems, it is important to preserve our greatest achievement of the past 10-15 years – macroeconomic stability. It’s hard to find, but easy to destroy.

Vladimir Mau is the rector of the Russian Presidential Academy of the National Economy and Public Administration.