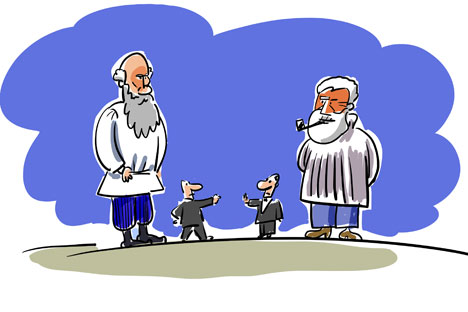 Russia and the United States are massively curtailing programs that facilitate educational and cultural cooperation. Historian Ivan Kurilla explains why they should be doing the precise opposite.

One of the hottest periods of the Cold War ended in January 1958, with the signing of the Lacy-Zarubin Agreement, also known as the “Agreement Between the Soviet Union and the United States of America on Exchanges in Science, Technology, Education, Culture, and Other Spheres.”

Soon after, young pianist Van Cliburn won the International Tchaikovsky Competition in Moscow, while Igor Moiseyev’s folk dance ensemble and the Bolshoi Ballet made a big impression during American tours. Later, in 1973, American and Soviet scientists were able for the first time to conduct research projects in other countries with the support of the Fulbright program.

With the onset of perestroika and the reform years at the end of the 1980s and beginning of the 1990s, ordinary Russians and Americans started to actively visit one another’s’ countries, and foreign exchange programs opened up for Russian and American students.

During that period, the U.S. government and American philanthropists invested heavily in building the infrastructure for these exchange programs – to a much greater extent than the Russians did, since Russia was suffering through a serious economic crisis at the time.

But these exchanges proved useful to both sides. Russian scientists were able to continue their research despite sharp reductions in funding, without leaving the country and without transferring to the business sphere or to state-owned structures. Both Russians and Americans gained experience communicating with one another.

Today, all of this infrastructure for scientific, cultural and educational cooperation is being destroyed before our very eyes. And it is being dismantled by both sides. Last winter, even before bilateral relations soured in connection with the Ukraine crisis, the U.S. reduced funding financing for research and cooperation programs with Russia. As a result, the Kennan Institute’s Moscow office was closed in the spring, and the Moscow Carnegie Center’s journal Pro et Contra ceased publication in the summer.

Then, on Oct. 1, the Russian government terminated the Future Leaders Exchange (FLEX) Program, which gave Russian high school students the opportunity to live with an American family and study at an American school for one year.

Various reasons have been given for each particular closure, but it is obvious that each of them would have been resolvable in the framework of regular diplomatic dialogue.

Why is all of this happening in such an abrupt way?

Some have speculated that these events are a result of the “return of the government” as the primary, if not only, actor in international politics. Governments are starting to show who’s boss by purposely severing cross-border links.

In this view, the cosmopolitan nature of modern science and culture contradicts the objectives of geopolitics.

Conspiracy theorists see malicious intent in funding for educational trips. But in this case, if these motives were there all along, why are the programs being cancelled only now? And why, then, didn’t the Russian government create its own infrastructure for personal contacts, scientific cooperation, and educational trips in the 2000s, when the budget had the money for it?

Personal interaction between Russians and Americans can dispel frightening myths about Russia much better than Russia Today can, and scientific cooperation raises the prestige of Russian science throughout the world. And after all, if Russians who go to the U.S. can be suspected of sympathizing with that country, why not invest in organizing a counterflow of Americans to Russia?

Today these questions are already obsolete. Instead of nurturing relations, Russia and the U.S. have instead paved the way to their complete ruin. The closure of all the Russian-American cooperation programs created in the 1990s is likely to be followed by programs that have been in place since the détente, thus spelling the end of the 1958 agreement. And there’s not much distance between that and the symbolic unplugging of the hotline between the White House and the Kremlin.

If, however, we proceed from the assumption that no one – neither in Moscow, nor in Washington – is planning on or wants to start an actual war between Russia and the U.S., then amid all the fierce rhetoric, economic sanctions, and diplomatic struggles at international organizations, the challenge facing both societies is to strengthen – not destroy – contacts at a non-political level.

It would be inappropriate to call what is going on with culture, science, and education “sanctions,” because gains and losses are viewed completely differently in these fields. Can you imagine a ban on reading Hemingway and Twain in Russia, and a tit-for-tat prohibition on Tolstoy and Chekhov in the U.S.? But unfortunately, the closure of exchange programs is closer to that absurd ban that it is to the sanctions against imports of chicken legs and microchips.

It is these educational and cultural contacts that bind us together and that lay the groundwork for better relations in the future. Politicians understood this well during the Cold War. Our generation would do well to consider it, too.

Ivan Kurilla is the head of the Department of International Relations and Foreign Area Studies at Volgograd State University.

Read more: A Fulbright scholar from Russia talks about his studies in the U.S.>>>